Barely — just barely — Minnesota is a winner in the 2010 Census results released Tuesday. But barely is good enough in this contest with enormous political stakes. The state gets to keep its eight seats in the U.S. House of Representatives.

Minnesota won the last available seat with just 8,739 people to spare, said Kimball Brace of Election Data Services Inc. in Manassas, Virginia. Had the state counted that many fewer people — or, had the next two states in line, North Carolina and Missouri, counted about 15,000 more residents, Minnesota would have lost the seat, he said.

“You got that seat just by the hair of your chinny-chin-chin, just by counting 8,739 people,” Brace said. “Whatever Minnesota may have spent on making sure everybody participated in the census, you are reaping the benefits of that today. This was money well spent.”

The state’s official population count in April this year was 5,314,879, the U.S. Census Bureau announced on Tuesday, up 7.8 percent from 10 years ago. The state’s growth rate was below the national average of 9.7 percent.

Minnesota’s growth ranks the state high enough in the congressional reapportionment process to hold the same number of congressional seats it has claimed since 1960.

So, if you completed your form last April, pat yourself on the back. (If you didn’t, well…!)

Some 74 percent of the 134 million households contacted nationwide for the 2010 Census did complete the 10-question form. Scant reason not to do so — it was one of the shortest forms in the nation’s history, with just 10 questions.

This is the first announcement of results from this census, the 23rd nose count the nation has conducted. It gives us the results for the nation as a whole and for each of the 50 states. Further results — such as the population counts at the county and local levels and also breakdowns along ethnic lines — are scheduled to come out next year.

Overall, the census reveals the continuation of a trend that has gone on for decades, Robert Groves, the director of the U.S. Census Bureau said at a press conference connected via webinar and telephone with reporters nationwide.

The South and the West grew at the expense of the Northeast and the Midwest.

Among Midwestern states, Minnesota’s growth was second only — by a hair —to South Dakota, which grew by 7.9 percent. Except for Michigan, no other Midwestern state actually lost population, but some grew far slower than the nation as a whole. Illinois, for example, grew by just 3.3 percent

Nationwide, the fastest growing state was Nevada with a booming 35.1 percent growth over the decade.

States that lost congressional seats will likely have to match incumbents against each other unless there are retirements in side-by-side districts.

You get the picture. Beginning in 2013, Congress will tilt further toward states that are more Southern or Western — and, typically, more Republican.

The process of deciding the seats is more complicated than a straightforward population count. Each state is assigned one seat. Then, a complex apportionment formula allocates the remaining 385 congressional seats one at a time among the 50 states until all 435 seats are assigned. (You can learn more about apportionment here.)

More than a seat

The stakes go well beyond a seat in the House chamber. Some $400 billion in federal funding is distributed each year to states and communities based on the census counts.

Further, the makeup of the Electoral College is based partly on the number of seats each state has in the U.S. House.

So a state’s sway over the selection of the nation’s president and vice president also is at stake. And we only have to look back at the 2000 election — when George W. Bush garnered 271 electoral votes, one more than the majority needed to win the presidency — to know that a single vote can make a difference.

Get ready for fireworks

To say that Minnesota doesn’t lose a congressional seat is not to say that the state escapes the politically charged work of redrawing the lines defining its congressional districts.

This first look at the census data sets in motion a process aimed at giving each citizen the same proportional representation in the U.S. House. After the 2000 Census, each Congress member represented about 647,000 people.

Thanks to population growth, there will be 710,767 House members per representative in 2013.

Even though most states retain the same number of House seats, no state is frozen in a 2000 population frame. People have moved around, of course. Some had more babies than others. Some chased jobs across district lines. In some pockets of the elderly, more died than elsewhere.

What’s true nationwide is true in Minnesota, too.

The Census Bureau won’t release district breakdowns until early next year. But most likely, the suburban and exurban districts currently held by Republicans John Kline and Michelle Bachman have gained residents and will have to give up some territory. And the districts held by Democrats Betty McCullom, Keith Ellison and Collin Peterson likely have lost residents or at least not gained as fast as the suburban areas.

So the state still faces redistricting next year, and that is certain to be politically contentious — especially in a state where the Legislature and the governor are from opposite parties. Pundits from every political persuasion expect the state’s new district boundaries eventually will be drawn under court supervision.

Commerce Secretary Gary Locke delivered the results of the census to President Obama this morning.

The next formal steps begin in January when Obama is to report the counts released today to the U.S. House which, in turn, is to inform each state governor of the number of representatives to which that state is entitled.

After that the Legislature has a go at drawing the lines in a plan which the governor can sign or veto.

In the likely case of a standoff, it goes to the court.

For an interactive census data map, go here. (Note: If you’re looking at the Census Bureau’s interactive maps, you may see two different population numbers for Minnesota. The state’s “apportionment population” cited in this story — 5,314,879 — includes some residents living outside the country such as military personnel. But planners often use a different number, the “resident population” on April 1, 2010. For Minnesota, that number is 5,303,925.) 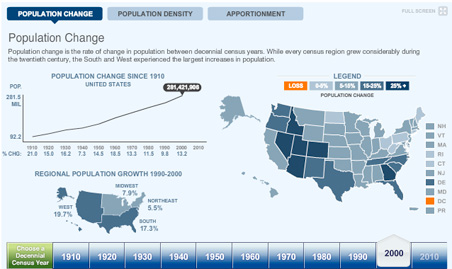