The Midwest is not exactly a lonelier place to live than it was 10 years ago. Every state in the region gained population during the past decade — except for beleaguered Michigan which suffered a massive job loss in the Great Recession.

Still, the new census numbers released on Tuesday do show Minnesota occupying a region that has lost considerable national political clout over the decades and stands to lose more in the 10 years to come.

Five of the 10 states that will lose congressional seats during the next decade — Iowa, Illinois, Michigan, Missouri and Ohio — are in the Midwest. The other five are in the Northeast.

Looking back
It wasn’t always that way. A century ago, the Midwest was the nation’s most populous region, home to roughly one in every three Americans. The South came close behind, followed by the Northeast. The West, by contrast, was a sparsely populated outpost where just 7 million people — about 13 percent of the population lived.

Then came a host of developments including air conditioning, the California dream, a massive crossing of Mexicans into the country, a parallel migration of retirees to the Sun Belt.

The sum of the trends was a huge boom making the South, by far, the nation’s most populous region. As of April this year, nearly 115 million Americans lived in the South, compared with 67 million in the Midwest and just 55 million in the Northeast. As for the West, it now claims 72 million residents for a ten-fold growth over the century.

Now the latest Census figures, announced on Tuesday, show that the South and the West continued their growth spurts during the past decade with each claiming close to 14 percent growth compared with 3.9 percent in the Midwest and 3.2 percent for the Northeast.

You can’t blame the Midwest’s tepid pace on Minnesota, which grew by a healthy 7.8 percent during the decade. Still, that was lower than the overall national rate of 9.7 percent.

Changes over the decades came in tandem with a political shift. The South largely abandoned the Democratic Party and turned more politically conservative by several measures.

Looking forward
It’s too soon to predict that the latest Census figures presage an even sharper shift to the right for the nation, says analysis by the New York Times.

A good share of the latest growth in the South and West came in Hispanic populations which tend to favor Democrats.

“Further, in the urban areas that are losing population, like Cleveland and New Orleans, the voters are so overwhelmingly Democratic that modest changes in boundaries will not harm Democrats much,” it said. 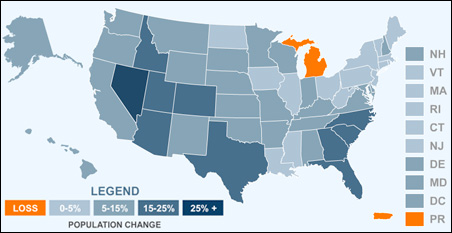 But the trends should benefit Republicans over all, almost no matter how the new boundary lines are drawn, it concluded.

The Census Bureau won’t release the breakdown of population counts within each state’s congressional district until early next year. But it’s a safe bet that Minnesota’s fastest growth came in suburban and exurban areas that favor Republicans.

Gains and losses
Meanwhile, here are some tidbits from the numbers that were unveiled this week:

As for the five-state Upper Midwestern region, Wisconsin still claims the most residents with about 400,000 more than second-place Minnesota. Wisconsin grew by 6 percent during the decade compared with 7.8 percent in Minnesota. Here is the growth rate for the others: South Dakota, 7.9 percent; North Dakota, 4.7 percent; Iowa, 4.1 percent.

Despite respectable growth during the decade, North and South Dakota remain among the nation’s five least populated states, along with Wyoming, Vermont and Alaska.

You can tease out more of the data for yourself at the U.S. Census Bureau’s interactive map.

Don’t waste time looking for the latest numbers on your county or city, though. They won’t be released until early next year. Then begins the fireworks of redistricting every state.