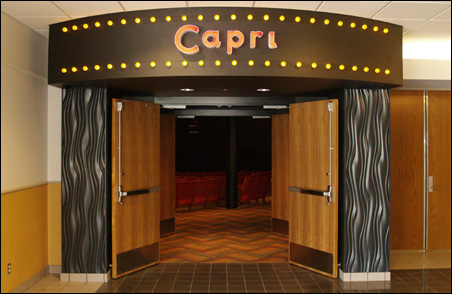 Courtesy of the Capri Theater
Architect Jon Baker designed a indoor “marquee” for the new sound/light vestibule between the auditorium and lobby.

The sparkling marquee atop the renovated Capri Theater carrying the words “St. Paul Chamber Orchestra,” brightened up the corner of West Broadway and Logan on the North Side of Minneapolis Saturday night as people scurried into the lobby to pick up their tickets. Old-timers in the crowd could perhaps recall an earlier, busier day, from the late 1920s up through the ’60s when Broadway carried a touch of glamour and that same marquee blazed names like Charlie Chaplin and Barbara Stanwyck.

You might not think it these days, but West Broadway was something close to this city’s Great White Way, a bustling show-biz street rivaled only by Hennepin. The Capri, built in 1927 and originally known as the Paradise, was one of three movie theaters along Broadway — in all, one of 13 theaters that once dotted the North side. Much later, in 1979, Prince gave a series of three concerts — among his earliest local performances — at the Capri.

Those lights have dimmed in recent years. Boarded-up stores and empty lots now dominate the scene. But the Capri hopes to turn the lights back on. Owned and operated since 1984 by the Plymouth Christian Youth Center, an education and arts facility, the Capri began presenting concerts and musical plays three years ago, invoking the venerable notion that the arts can have a positive effect on the environment — and perhaps even stimulate some much-needed business development in the area.

The City Council got behind the project in 2008, naming the Capri part of its West Broadway Alive plan, and Minneapolis Mayor R.T. Rybak has been one of its chief supporters.

‘It will be our Apollo Theater’
“When we first began thinking about the Capri a few years back, the line we used was, ‘It will be our Apollo Theater,’ meaning that people will come to North Minneapolis because of North Minneapolis, not in spite of it, in the way that, in New York, you go to the Apollo Theater,” Rybak said. “The initial events there — the R&B concerts and the jazz — reflected the culture of the North Side. The next step is to bring in the greatest artists of all kinds.”

Hence, Saturday night’s free concert by the St. Paul Chamber Orchestra, the first of a three-concert series funded by the Minnesota State Arts Board and the first major classical concert at the Capri since the theater was renovated in 2009. And, as far as performances by the SPCO on the North Side go, this was almost a first. (The orchestra’s archives, covering 52 years of performances, show concerts all over the Twin Cities metro area, but only one in North Minneapolis, at the Church of St. Anne in 2001.) 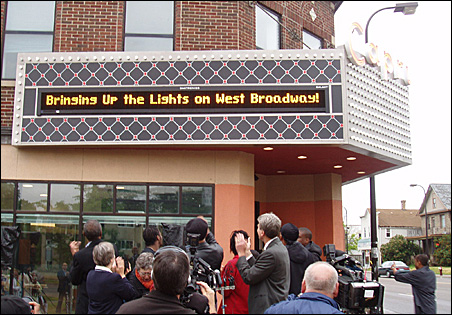 Courtesy of the Capri Theater
The retrofitted marquee was switched on at a press event in June 2009 with Mayor R.T. Rybak, center, and Councilman Don Samuels.

Even though Saturday’s concert was sold out (patrons registered for free tickets online), building an audience is difficult given the image of the North Side as crime-ridden and violence-prone, said Karl Reichert, the theater’s director. (“North Minneapolis: A Study in Violence,” screams a recent headline in the Star Tribune.) But that image appears to be changing for the Capri. “I haven’t had a call all year asking if it’s safe to park near the theater. The first year we got lots of calls about security,” Reichert said.

Beverly McLaughlin, who came to Saturday’s concert all the way from Isanti, Minn., first visited the Capri to hear a big-band jazz concert. “I had a little bit of concern as to whether it was safe,” she said. “But I had no trouble at all. I felt just fine. I like it here. It’s a community place, and it’s comfortable, not too big.” (The theater seats 250.) Reichert says that 80 percent of the audience for the theater’s jazz series now comes from outside the North Side.

Current phase began in 2007 with benefit
The current phase of the Capri’s long and varied history started in 2007, when singer Dennis Spears, the theater’s artistic associate, put together a fund-raising concert that sold out and featured, besides himself, singers Charmin Michelle and Debbie Duncan, backed by the Wolverines Trio. The Legends of Jazz series, which will continue with tributes to Nancy Wilson and Peggy Lee by Ginger Commodore and Connie Evingson Feb. 12 and 13, was born out of that. The $650,000 renovation of 2009 included new sound and light systems and an electronic message board on the marquee.

Saturday’s concert featured seven members of the Chamber Orchestra playing a substantial program of works by Elliott Carter, Beethoven and Mozart. The orchestra’s new director of artistic planning, Patrick Castillo, introduced the players and in articulate, informal fashion described the music. In a nice, off-beat touch, four young students of the Plymouth Christian Youth Center stood in a line at the edge of the stage and welcomed the audience at the start, each one handing the microphone to the next. The mood of the evening was bright and convivial. The look of the renovated theater, both inside and out, is friendly and inviting, and the sound quality, not always favorable in old movie theaters, is warm and bright — a result, presumably, of all that plaster on the walls.

The musicians were in good form throughout. More than in most other orchestras, these musicians perform a good deal of chamber music together, breaking into smaller groups for various concerts, and that was demonstrated repeatedly on this occasion in the easy rapport and tight ensemble the musicians sustained. Flutist Julia Bogorad-Kogan and clarinetist Timothy Paradise opened the program with a work of Carter’s from 1985, “Esprit rude/Esprit doux (Rough Breathing/SlowBreathing),” composed in honor of Pierre Boulez. The two instruments are in constant and often witty dialogue. There is an element of fantasy in this music, as there is in much of Carter’s later work. Wisely, Castillo asked the musicians play the piece twice. It lasts just four minutes.

Courtesy of the Minnesota Historical Society
The Capri Theater was once known as the Paradise Theater from the mid-1930s to 1967. This photo was taken in the late 1930s before a matinee.

Mozart’s Clarinet Quintet draws standing ovation
Bogorad-Kogan returned to the stage for the Beethoven — the Serenade in D for Flute, Violin and Viola, Opus 25 — and was joined by violinist Sunmi Chang and violist Sabina Thatcher. The music sang effortlessly, most notably in the variations of the fourth movement, and the finale had just the right playful gallop. Paradise came back after intermission for Mozart’s sublime Clarinet Quintet. With him were Chang, Thatcher and cellist David Huckaby. Paradise is obviously no stranger to this work. His rich tone and liquid phrasing conveyed an aura of dignity and calm beauty, a kind of musical wisdom that seemed to be telling us stories that nourish and enliven. Not surprisingly, this lovely performance was rewarded with a standing ovation.

The SPCO will return to the Capri March 26 and May 21. (Free tickets must be reserved in advance through the theater’s website, or by leaving a message at 612-643-2050.) Reichert said he hopes this is the start of a long-term relationship with the orchestra. Sarah Lutman, the orchestra’s president and managing director, echoed that sentiment. “We haven’t been bringing our concerts to the North Minneapolis neighborhood,” she said, “and we’re pleased to be able to perform at the beautifully renovated Capri Theater through this partnership.”

Mayor Rybak lauded Reichert and the Capri staff. “Karl has been extraordinarily successful,” he said. “This has been a big success story about the arts leading economic development.”

Reichert said he hopes for a restaurant to open in a nearby building, along with some retail developments.

“It’s all baby steps, but it’s happening,” he said.