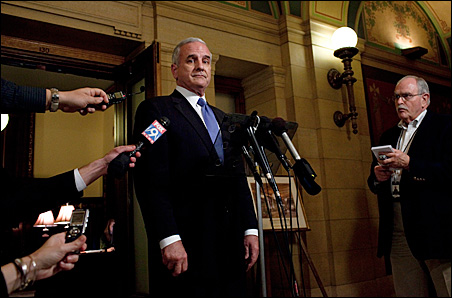 One of this state’s most recognizable names will be attached to Minnesota’s highest political office when Mark Dayton is sworn in as governor in January.

For nearly 100 years, starting in 1903, Dayton’s family name was prominently displayed on the front of the Nicollet Avenue department store that became the flagship of a far-flung retail empire.

That empire’s founder, George Draper Dayton, the governor-elect’s great grandfather, was an ambitious real-estate developer from Worthington, Minn., who began buying property in downtown Minneapolis in the early 1890s.

In 1895, when fire destroyed the Westminster Presbyterian Church at 7th and Nicollet, Dayton purchased the site from the church for $165,000. Later, he extended his holdings until he controlled the full frontage along Nicollet between 7th and 8th streets. By 1901, Dayton, who would soon relocate to Minneapolis, began building a six-story building on his downtown block.

Anchor tenant needed for new building
The shrewd developer knew he needed an anchor tenant for his new property, then on the outskirts of the downtown retail district, and he found one by persuading a struggling department store, Goodfellows Dry Goods, to relocate to his Nicollet Avenue building. As an added inducement to get Goodfellows to move to the new location, Dayton, himself, became a part owner of the business.

Goodfellows opened its doors in Dayton’s building for the first time in 1902. Within a year, Dayton had bought out his partners and put his own name on the Nicollet Avenue store, where it stayed until 2001.

In 1906, the elder Dayton named his son, Draper, general manager of the store, known at this point as Dayton’s Dry Goods. Soon, Draper brought his younger brother, Nelson, into the business with him. By 1910, the younger Daytons and their father had boosted annual sales to nearly $2 million, a threefold increase over what they had been eight years earlier, when Goodfellows opened for business at 7th and Nicollet. Then, in 1911, Dayton’s Dry Goods became The Dayton Company, the name that would continue to identify the downtown department store for more than a half century. 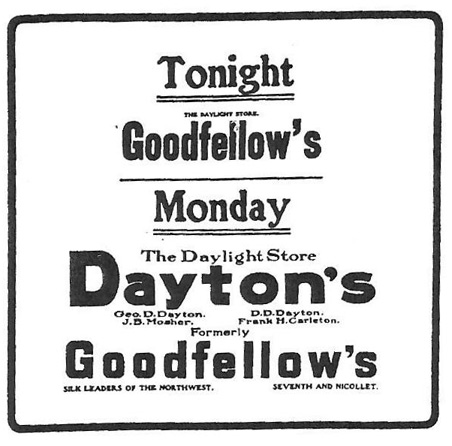 Courtesy of the Minnesota Historical Society
Dayton’s first newspaper ad appeared in the May 23, 1903, issue of the Minneapolis Journal.

When Draper Dayton died unexpectedly of a heart attack at the age of 43, his brother Nelson obtained a controlling interest in the business. Nelson would live to see the Dayton Company’s annual sales exceed $60 million by the time he died in 1950.

Control passes to five sons
That year, control of the company passed to Nelson’s five sons, then all under the age of 36. The brothers — Mark’s father, Bruce, and Bruce’s four siblings, Donald, Wallace, Kenneth and Doug — vastly expanded the family business established by their grandfather in 1903. During the brothers’ era, their company built the country’s first indoor, climate controlled shopping center at Southdale, established the Target chain of discount stores, and acquired the Michigan-based J.L. Hudson Company. That acquisition brought about a name change. The Dayton Co. would be known as the Dayton-Hudson Corp.

The brothers would also convert their family-owned business from a privately held operation to a publicly traded company. Gradually, they would bow out of active management, ceding control of the company to outside board members and investors. 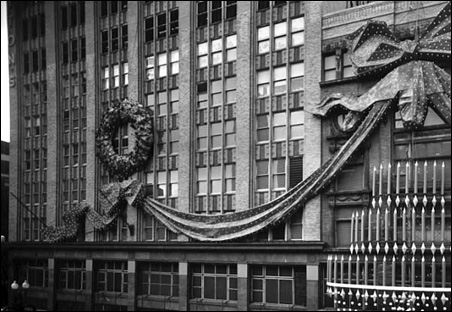 Courtesy of the Minnesota Historical Society/Photographer: Norton & Peel
Christmas decorations on the exterior of Dayton’s in downtown Minneapolis in 1956.

The 21st century would bring a series of jarring changes to the company founded by George Draper Dayton at the start of the 20th century. In 1990, Dayton-Hudson had acquired the Chicago-based Marshall Field Co. Then, in 2000, Dayton-Hudson would change its name to the Target Corp., signifying the rise of the discount chain to the dominant position in the wide array of businesses operated under the corporation’s umbrella.

In 2001, much to the chagrin of many long-time Twin Cities area customers, the Target Corp. expunged the name “Dayton’s” from its department store chain, renaming the chain “Marshall Fields.” In 2004, Target rid itself of its department stores in one fell swoop, selling off the entire chain, including what had once been the flagship store on the Westminster Church site. In 2005, that store, along with others in the chain, became Macy’s. 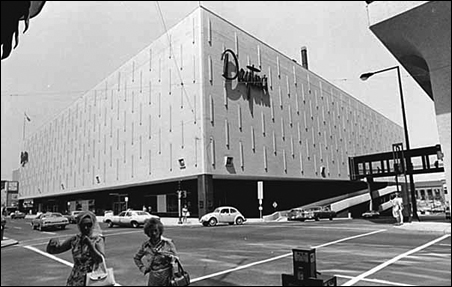 Courtesy of the Minnesota Historical Society/Photographer: Steve Plattner
The Dayton’s store at Sixth and Wabasha, St. Paul, circa 1975.

The Dayton name: A Minnesota institution since 1903