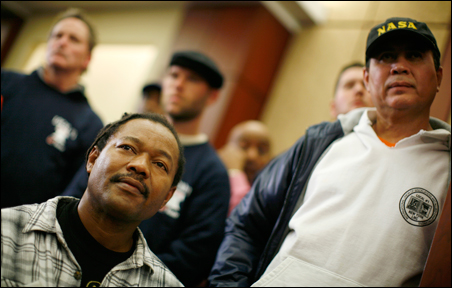 REUTERS/Kevin Lamarque
Unemployed workers listen to remarks during a Dec. 1 news conference on the expiration of unemployment benefits.

Here’s important context for our stubbornly high unemployment rate: It is largely a problem of the least educated.

Americans with college degrees have been close to full employment throughout the Great Recession. And this holds especially true in Minnesota.

So the groups with the greatest stake in Washington’s fight over extending unemployment benefits are those who dropped out of high school or never entered a classroom after high school graduation.

For the most part, these are the people who are making the desperate tradeoffs between paying bills and buying food. They are putting off health care. They earned far less to begin with, and they’re hit much harder during tough times.

They also are less likely to vote.

Compare that with a 4.7 percent unemployment rate for those with a bachelors’ degree or higher.

In Minnesota, the gap is even wider. The unemployment rate for high school dropouts was 19.2 percent on average during 2009, according to the Bureau’s latest state-level statistics. [PDF]

And get this: For Minnesotans with college degrees, the 2009 average rate was 3.4 percent.

Even taking your education a bit beyond high school seemed to help shield the recession’s nasty blows. Minnesotans who had completed some college classes or earned an associate degree scored an average unemployment rate of 6.6 percent during 2009 – compared with 8.9 percent for high school graduates who never attended college.

Natural unemployment
You may know highly educated people who lost jobs during the Great Recession. I do.

To be sure, attorneys have been laid off, teachers have been terminated, companies have cut engineers from their staffs and some hospitals have let go of nurses. This can be devastating for the individuals who got the pink slips, especially those with hefty college loans to repay and families to support.

But there is always some churn in the job market.

Macro economists argue over the definition of full employment. Some have maintained that the ideal unemployment rate is zero, meaning that everyone who wants a job has one.

That’s an elusive ideal. As a practical matter, economists talk in terms of more realistic measures, such as the “natural” unemployment rate.

The target has moved over the years, but since World War II, the United States generally has said we have full employment when the unemployment rate stands at about 3 percent for people aged 20 and over.

Getting worse
Dig deeper into the BLS data, and you see that the education-employment gap has grown over the past decade. The least educated have fallen further behind during this recession than they did in earlier economic downturns.

And there’s reason to worry that the prolonged period of joblessness we’re suffering now will make their plight even worse. Federal Reserve Chairman Ben Bernanke expressed concern last week over workers who have been without a job for a long time, Bloomberg reported.

“This is very unusual and very worrisome because people who are out of work for an extended period, their skills tend to erode,” Bernanke said at a meeting with business leaders in Columbus, Ohio. 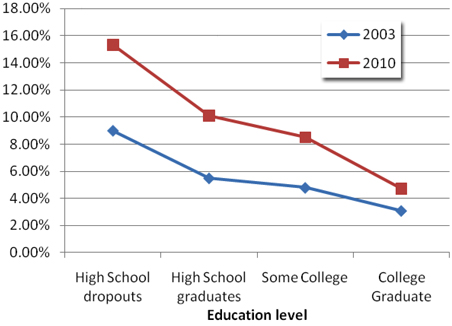 About 6.2 million Americans — 42 percent of those without jobs — have been unemployed for more than six months. As Bernanke suggested, they could be left further and further behind as the economy recovers with little need for their rusty job skills.

Not in your rear-view mirror
The education-employment gap is not a problem the college-educated can watch in their rear view mirrors as they race toward economic recovery.

Minnesota’s demographics make it a pressing problem for the state’s future economic well being.

One reason that Minnesota’s unemployment rate held lower than the national rate through most of this last recession is that the state’s economy is built on a relatively well-educated workforce. Jobs here tend to require professional and technical skills. And workers here have the skills to fill them.

But that is set to change. The relatively well-educated and well-skilled baby boomers are getting ready to retire.

Meanwhile, the populations that are projected to grow the fastest are in Latino and black communities — where, for one reason or another, kids are far more likely to drop out of high school.

This is the big-picture problem looming in the background as a new Legislature gets ready to convene in St. Paul. Our new crop of lawmakers and our new governor (who ever that may be and whenever he gets seated) have more challenges facing them than the daunting task of balancing the state’s budget.

Their actions or inactions on a range of issues — from higher education funding to programs aimed at keeping kids in school — are going to set the employment prospects for a new generation of Minnesota workers.