“We have been sternly admonished not to be frivolous, and we take that seriously.”
— Tom Emmer lawyer and former Minnesota Supreme Court Justice Eric Magnuson, Nov. 23, 2010, at State Canvassing Board

“Remember, this is not a clinical process, folks. This is a political process … So, there’s going to be some of that gamesmanship around.”
— Republican Party lawyer Tony Trimble on the increased incidence of frivolous ballot challenges by Emmer in Hennepin County, today, to reporter

We have met the Tom Emmer “end game,” and it’s stuffed with frivolous ballot challenges in Hennepin County, even more than we expected.

Come Friday afternoon, we shall see what the State Canvassing Board thinks about it all.

Ever since the dust shook out on the results of Election Day and it was clear that Mark Dayton had a lead of nearly 9,000 votes over Republican Emmer, Dayton lawyers and supporters have been puzzled about where Emmer’s legal team was headed, that “end game.”

As the canvassing of the 87 counties proceeded, no major voting irregularities or fraud have been found; or, at least, none that we’ve heard of. As the recount has unfolded, just about everything has gone smoothly … except in Hennepin County, the state’s biggest, which produced about 25 percent of all of Dayton’s votes statewide. 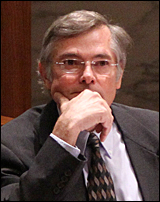 “Frivolous” is clearly defined in the secretary of state’s recount plan and in a rule instituted after the 2008 U.S. Senate recount. “Challenges may not be automatic or frivolous,” reads the recount guide. “A challenge is frivolous if it is based upon an alleged identifying mark other than a signature or an identification number written anywhere on the ballot or a name written on the ballot completely outside of the space for the name of a write-in candidate.”

But Emmer challenges have included objections to a dot in another oval besides Dayton’s or, frankly, to something like the oval for Dayton being filled in, but only 99 percent so, not 100 percent. The voter’s intent is clear. As an example, here’s a link to 84 ballots from one Minneapolis precinct.

The pace has picked up over the past two days, and this afternoon, Trimble, more or less vowed to increase the challenges until they reach the level of Dayton’s lead, which is now, it seems, more than 9,000 votes.

As for Dayton, his side produced 42 frivolous challenges, but late today, Dayton lawyer Marc Elias sent a letter to the Canvassing Board withdrawing all of Dayton’s challenges.
Elias told the board: “The Emmer campaign has embarked on a disruptive campaign of frivolous ballot challenges.”

At noon today, at an ad hoc briefing, reporters gathered around Trimble, who also was one of Sen. Norm Coleman’s lawyers in 2008, and asked him questions.

Trimble explains strategy
Reporter: “Tony, if you guys don’t have 8,770 challenges, should the Canvassing Board look at a smaller number even if it wouldn’t be enough to turn around the results?”

Reporter: “Did you just predict that the Canvassing Board would get more than 8,770 challenges?”

Trimble: “That would be my prediction, of course. That’s why we’re here.”

Reporter: “That means the pace of challenges is going to have pick up significantly”

Trimble: “That could happen.”

Reporter: “With all due respect, Mr. Trimble, what you just said, though, sounds like you’re going to challenge to get the number no matter whether they’re real challenges or not .”

Trimble: “No, I didn’t say that. I said I think, I predict, that we’ll have significant number of ballots for the Canvassing Board to review.”

Trimble: “I don’t understand your question.”
Reporter: “The question is: Mark Dayton is ahead by 9,000 and you’re challenging ballots just to challenge ballots. You said that.”

Trimble: “No, we’re not. I didn’t say that, and I think you’re putting words in my mouth. We are allowing our challengers to challenge ballots that they have a question about.”

Reporter: “But you must be instructing them to challenge them?’

Trimble: “No, I am instructing them to challenge ballots if they have a significant doubt as to the intent of the markings on that ballot.”

Reporter: “But you train them on what to look for, yes?

Trimble: “We train them to look for anything that might lead to doubt as to the intent of the voter with respect to that ballot. If they have any doubt, then they challenge.”

Which takes us to Friday’s 2 p.m. Canvassing Board meeting, called specifically to address the matter of frivolous ballot challenges, when we will learn if the board will review any of them. The board will meet in the same room it did on Nov. 23, when Supreme Court Justice Paul Anderson admonished his former colleague, Eric Magnuson, who is now Emmer’s other lawyer.

Anderson pointed to Magnuson that day and reminded him of his oath as a lawyer, and he implored Magnuson to advise Emmer recount workers. “I sure hope you’re not going to let them make a frivolous challenge, just to do it,” Anderson said.

Later, Anderson added: “I would trust that as you go forward and you have challengers and you would give them proper instructions. We said that frivolous challenges are not welcome. And I would hope that you would not come here and I’d have a stack of ballots that are per se frivolous and you would justify that … Can I get that assurance from you?”

Magnuson said he would follow the letter and spirit of the recount law and rules, adding, “We will abide by the rules and the regulations as long as we have a chance to present our case, if we have a case.”

And that’s what we will learn more about on Friday, when Anderson takes his place behind the board table and Magnuson sits 10 yards away with Trimble, no doubt, at his side.