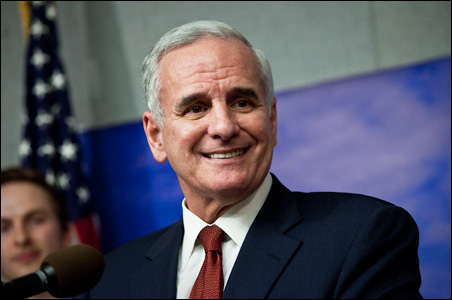 Mark Dayton, finally the governor-elect, stepped behind a lectern this afternoon, looked up at the crowd of reporters and supporters, smiled ever so briefly and quickly dived into his prepared text.

Unlike the governor he succeeds, Gov. Dayton isn’t going to spend a lot of time schmoozing or cracking one-liners. Sound bites will be few and far between. (“He can’t even write a sound bite,” one veteran Capitol reporter said after reading Dayton’s prepared text.)

How did Dayton, who began his campaign almost two years ago, feel when he heard last night that Tom Emmer would give up the recount battle?

“Humbled,” he said. “Mindful of the awesome responsibilities … Resolved to do my very best.”

Oh, once in a while Dayton seemed relaxed as he spoke this afternoon.

He was asked, for example, if he had thought of Rudy Perpich, one of his political mentors and the last DFL governor to serve, on this day when the election of 2010 finally was concluded.

Dayton responded that he’d had dinner last night with the late governor’s daughter, Sue, and her children. They’d shared laughs and memories of the days when Perpich was governor.

Advice from Rudy?
What would Rudy tell him?

Even when he’s being light, Dayton turns heavy quickly and talks about hard work for “the people of Minnesota.”

The governor-elect did express relief that the recount process ended in a timely manner. He admitted that he feared the process might drag on as it had in the Coleman-Franken Senate race two years ago.

“I wouldn’t wish what happened to them on anybody,” Dayton said. “I was dreading the prospect of that.”

Recounts at the end of a long election campaign, he said, are like marathons with a cruel twist.

“You’re running a marathon and you get to the finish line and then someone tells you to keep on running.”

So his feelings of appreciation for Emmer’s concession are genuine. But when the governor-elect is deeply moved, he can get very clunky. For example, here’s what Dayton had to say about Emmer in his prepared text:

“I salute Rep. Emmer, who by his concession this morning re-affirmed the essential principle that in our democracy there can be a close election, which is re-examined and recounted carefully, yet then, all accept its result — so that our democracy can continue to function. This is a profoundly important legacy of your campaign, Rep. Emmer, for which all of us owe you our respect and our gratitude.”

Whew.  Can you imagine what his state of the state speeches will sound like?

He wrote this “victory speech” last night, after learning from members of the transition team that Emmer was going to throw in the towel this morning.

As he read his text, you could almost envision what he looked like as he was writing. Brow furrowed, sweating over each and every word. He’s filled with so much controlled passion and so little poetry.

At this point, Dayton truly seems to believe that he’ll be able to work with the Republicans. He figures that with all legislators facing another election in two years, they will be eager to show that they are able to find common ground.

But the differences between the Republican majority and the governor-elect are profound. Although his speech today was filled with olive branches, there also was this one big fighting statement buried deep in the text:

“I will continue to insist that those state and local tax dollars be collected more progressively, so that all Minnesotans pay their fair share for the essential services all Minnesotans need.”

The supporters in the crowded room at the state Capitol applauded that line.

Those supporters looked dramatically different from the supporters who have surrounded Minnesota governors in the last quarter-century. There were, for instance, union leaders and Iron Rangers in the room, and they all were smiling hugely.

“Been a long, long time,” said Eliot Seide, director of AFSCME Council 5, which was the first union to endorse Dayton, clear back in October 2009.

Expect him to move quickly to building his new administration. His chief of staff likely will be named in the next day or two. (No. 1 rumored candidate for that job: Tina Smith, who has been Minneapolis Mayor R. T. Rybak’s chief of staff. She is connected and experienced and is one of the leaders of the Dayton transition team.)

Though he has two fundraising trips scheduled for next week — New York on Monday and Washington on Wednesday — expect other appointments to follow quickly, although Dayton said he couldn’t guarantee that all cabinet positions and commission appointments can be made by Jan. 3 when he will succeed Pawlenty.

His first order of business in office, by the way, will be signing documents that will move Minnesota into a federal health care program that DFLers say will save the state millions. It was a program Pawlenty — and Emmer — had opposed.

Dayton is serious about listening to all ideas from all sorts of people in the coming days.  He will meet with all members of the Minnesota’s congressional delegation when he’s in Washington, and he’ll be meeting soon with the Business Partnership.

When he received Emmer’s concession call this morning, he asked Emmer and his spouse if they’d like to have lunch to discuss ideas.

In a rare, light moment, he said that Emmer challenged him to a little pond hockey.

“He still wants to get me in pads to score a couple of goals against me,” said Dayton, a former goalie.

But his playing days are over, Dayton was quick to add.

He is to hold a joint news conference with the governor Thursday afternoon and also tour the governor’s mansion with Mary Pawlenty. It will be the first time he’s been in the mansion since Perpich was governor, Dayton said. He also said he’s never been in the residential area of the building. He sounded as if he plans to move into the mansion with his two dogs, Dakota and Mesabi.

Presumably, that’s so he’ll be able to be closer to “the office,” because this serious man has serious work to do.

Gov.-elect Mark Dayton, a serious man, meets the press with a serious message for serious times