When President Obama entered the room this morning, the crowd of about 400 people at the Interior Department was chanting, “Yes we can!”

Jacob Reitan — the Minnesotan sitting about six rows back from the podium where the president would sign into law a bill to end “Don’t Ask, Don’t Tell” — started his own chant.

And soon all those other activists who had worked so long and hard to end discrimination against gays in the military were chanting, too.

Reitan, 28, was one of a very small number from Minnesota invited to the signing ceremony. He’d received the invitation from a White House staffer who knew of his diligent campaign work on behalf of the president and, even more, his long work to end “Don’t Ask, Don’t Tell.”

Reitan, a 2000 graduate of Mankato West High, was the founder of the Right to Serve movement in 2006. He and other activists, acknowledging to military recruiters that they were gay, went around the country attempting to enlist in the armed forces.

Reitan made his first attempt in the Twin Cities in 2006 when he tried to enlist in the Minnesota National Guard. He was rejected out of hand. When he refused to leave the recruiting office, he was arrested for trespassing. He ended up spending about 12 hours in the Ramsey County jail and ultimately paid a $150 fine. 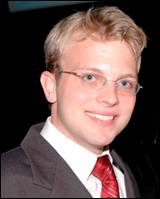 It was the first of many times he would be arrested while attempting to enlist. In time, a documentary was done on the group and shown on public television.

At this morning’s ceremony, Reitan shook hands with the chairman of the Joint Chiefs of Staff, Adm. Mike Mullen, and told him of being busted for attempting to enlist.

“We both laughed,” Reitan said in a phone interview. “To his credit, he did so much to make this day possible.”

Reitan started the day early, arriving at the Department of Interior at 6 a.m. (Those invited had been told to arrive by 7:30.) Reitan was seventh in a line that soon quickly grew. That line was filled with people who had pushed for the change that was about to happen.

“Many of the people in that line had worked a lot longer on this issue than I did,” said Reitan.

Time passed quickly. The invited guests moved into the room where the signing was to take place. There were military leaders, such as Mullen. There were ex-soldiers who had been thrown out of the military for “telling.” And there were senators and representatives, including a handful of Republicans who had voted with Democrats to end the practice.

Then, the president entered the room.

In truth, there had been times many of the activists in the room had entertained doubts about the president’s determination to end “Don’t Ask, Don’t Tell.”

“It’s easy to be discouraged,” Reitan said. “We couldn’t know what he had in mind.”

Discouragement was running at particular high levels following the outcome of the November elections. With Republicans taking control of the House and making major gains in the Senate, there were fears that elimination of “Don’t Ask, Don’t Tell” would be pushed down the line by years.

“But every time it appeared that the bill was dead, the gay community got even more active,” Reitan said.

Senators and representatives were being deluged with messages from constituents — gay and straight — to end the discriminatory practice.

The president spoke, and was at his eloquent best. Doubts about his commitment to civil rights for gays disappeared.

“A stain has been wiped from the slate of this country,” said Reitan after the ceremony. “It was the single most discriminatory [current] practice in this country, and it came to an end in a beautiful way. The president gave a great speech that showed how deep his commitment was. There were the cheers.”

Afterward, there were handshakes all around.

Reitan shook hands with many of the pols, including Rep. Tim Walz, who had been a teacher and football coach at Mankato West when Reitan was first coming out.

Then, there was the moment when Reitan, oft busted for attempting to join the military, shook hands with the president.

“How are you?” the president said to him.

“The president said something else, but I can’t even remember what it was,” said Reitan, sheepishly. “I was star struck, and I wasn’t at my most eloquent.”

So now, after being busted for attempting to join the military, will Reitan sign up?

“I’m thinking about that,” said Reitan, who plans to enter law school at the University of Minnesota next fall. “So much has changed from four years ago. I’m close to 30. And I might have one other problem. I have all those arrests on my record. They might not take me.”