With Mark Dayton poised to be Minnesota’s next governor, will the 2011 legislative session be a version of the immoveable force and the irresistible object – the governor insisting on some tax increases to balance the budget and the legislative GOP majority insisting on cuts and redesign to take down the $6.2 billion deficit gorilla? 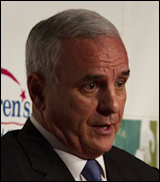 Dayton is sanguine. “They will reject my proposal and they will come with their alternatives,” he said. “They will have to face the impact that will have on teachers, children, the elderly, the disabled. Then they will come back to the table to find the middle ground.”

Not that Dayton is drawing a line in the sand. In our interview Tuesday, he stated frequently that nothing is “dead on arrival,” that “whatever their good ideas are, I will combine with mine.”

In fact, Dayton seemed keen on reform proposals and offered one of his own. He’s met with executives from Accenture and Price Waterhouse who, he says, have worked with Democratic and Republican state governments, getting paid as a percentage of the savings they identify.

He’d like them to do the same for Minnesota. “That is something we would initiate in the very beginning,” he said. “We’ll put an RFP [request for proposal] to ask for that kind of help — to find the best practices that we can adopt in Minnesota. I think there’s a great opportunity there.”

Dayton remains firm on several budget principles he offered during the campaign. He will push for a state income tax increase that he says will make the structure less regressive. Dayton says that in the mid-1990s, Minnesota had a virtual flat tax of 12.2 percent — that is, in income, sales and property taxes, most wage earners were paying about 12 percent of their income. The system since then, he maintains, has favored the highest wage earners, who as a percentage of their income, now pay the least amount in taxes.

“Under my plan [to raise taxes on the wealthiest Minnesotans] the rich would still be paying a smaller percentage of their income than they did under Arne Carlson,” he said. He admits it will not be popular (“There are no political gains in tax increases”), but necessary to correct long-term and future budget problems.

A second Dayton principle is to keep the budget hawks away from local aid. He calls the Tim Pawlenty pledge of no new taxes “mythology” because it resulted in property tax increases.

“How do you sever the fiscal relationship between the state and local governments — you can’t,” he said.

Dayton wants a budget plan that will be transparent, “no gimmicks. We’re going to do this squarely, openly,” although he stopped short of promising to pay back all the accounting shifts that helped balance previous budgets.

Feb. 15 is the deadline for the governor to submit his budget to the Legislature. Dayton is prepared for wholesale rejection. So, he says, he will ask legislators to deliver their budget by May 1. “That will give them two and half months to face the reality of what cutting 6.2 billion dollars means,” he says. “Even with half tax increases, this will be painful.”

Then, Dayton, said, legislators and the governor’s office can sit down and negotiate and end the legislative session on time.

Dayton is expected to make some staff announcements soon that will be key in getting the process started, which, he says, will come not a moment too soon.

“Minnesotans are concerned and properly impatient,” he said. “I think that’s why was there was this split decision in November. I think people said, ‘Let’s try it the other way — a DFL governor and a GOP Legislature.’ Their tolerance for political failure is zero.”

Ready to be governor, Dayton looks ahead to legislative session