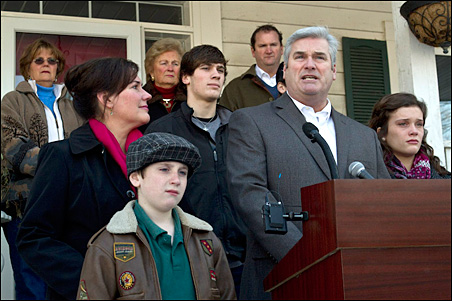 From the snow-framed front steps of his holiday-bedecked home a winding 45-minute drive west of the State Capitol where he once worked, Tom Emmer conceded this morning to Mark Dayton.

In the finest stylized theater of political concessions, the Republican loser was jocular and gentlemanly, had his family around him, sincerely wished Gov.-elect Dayton well and said it was time to move on.

Still, in this final speech of the campaign, soon-to-be Private Citizen Emmer couldn’t help himself from his unswerving advocacy for change in Minnesota’s election laws, the kinds of changes that some election integrity groups, county elections officials and many secretaries of state nationwide, including Minnesota’s Mark Ritchie, see as voter suppression, not voter inclusion.

Future election-law debates certain
Even as he waved goodbye to his gubernatorial efforts, Emmer pushed open the door to the continued debate about the need for voter photo IDs on Election Day, and other unspecified election integrity issues that are sure to come up in the Legislature in 2011.

Emmer’s comments got us to thinking about what this second statewide recount in two years has meant … in its creases and subplots:

• Election integrity: From the start, state Republican Chairman Tony Sutton yelled that the 2010 election was questionable, that there were more votes than voters, that something smelled, and that it had an odor like 2008’s Al Franken-Norm Coleman election, an election that was vetted by a dozen judges of all parties.

Of course, in both elections, the state Supreme Court, weighed in, and said things were, fundamentally, sound in Minnesota elections.

But, in the hours after the election, Sutton targeted Secretary of State Ritchie.

Emmer, without naming names, did so today, too, subtly.

“We must address the questions raised by recent elections in this state,” Emmer said today, elections administered by Ritchie, arguably the most progressive elected member of the state’s executive branch.

Emmer added: “We should not be surprised if there are citizens who might still pursue claims to attempt to address the integrity of our election,” although he didn’t say who or how.

(Minnesota Majority, the conservative group that has consistently challenged the integrity of the state’s election system and jumped on Ritchie, told MPR it had no plans to contest the election.)

Emmer went on: “I will devote my time to bring public awareness to these issues and the need for election reform, including, but not necessarily limited to, requiring a photo ID for voting.”

(See the new report (PDF) by the good-government Citizens for Election Integrity Minnesota about why it believes Voter ID isn’t necessary.)

In the end, it feels as though the GOP’s efforts on this recount, with the thousands of frivolous challenges by party lawyer Tony Trimble and with such a large margin to overcome, were meant to focus on anything untoward in the process as a way to put Ritchie on the spot. Just felt that way. I could be wrong.

• The state Supreme Court came through again: And that, despite the same alleged conservative bent among the five justices left to rule on recount matters this time as ruled in 2008.

Grasping for straws, Emmer today pointed to a footnote in the Court’s Tuesday opinion that he said showed that “reconciliation was not performed in every precinct.”

That’s not exactly what footnote No. 4 says on page 6 of the opinion (PDF) but Emmer said that could have been enough for him to file an election contest. (We don’t see how, nor does any scholar we’ve talked to or read on this.) But he decided not to.

On the other front, the two Supreme Court members on the Canvassing Board did well. Verbose and passionate Justice Paul Anderson dominated the administrative board, but he made sure that his former colleague, Eric Magnuson, knew that frivolous challenges would be viewed with much skepticism. (More below.) His admonitions worked as the Emmer team withdrew just about all of them before his concession.

Rookie Justice David Stras, considered an arch-conservative, proved to be a thoughtful, even problem-solving member of the board.

• Reconciling rule and law: When the Legislature does meet, it should tackle the gap in the law and the regulation that gave Emmer an issue before the Supreme Court.

There is a disconnect between how the law — obsolete as the Court said — reads on counting voters at precincts and how the regulation reads. It allows election officials statewide to count up voter’s receipts.

The Supreme Court’s opinion revealed a certain impatience for this ambiguity.

Most county auditors say the voter receipts are the way to go. Why not clean up this discrepancy? There shouldn’t be any partisan issue here.

Just like fixing the absentee ballot issues after 2008, anything to make an election fairer and less complex seems to be the way to go.

• Reducing the recount threshold: The next Legislature needs to reduce the recount bar from 0.5 of 1 percent to 0.25 of 1 percent. The voting machines we use in Minnesota are remarkably accurate. The various post-election reviews in the counties have shown that.

If 0.25 were in place, Dayton could have won by 5,500 votes this time and not been subject to a recount. Never in the recent history of the United States has a statewide election with a margin of 500 or more ever flipped to the trailing candidate.

(By the way, New York Republican Randy Altschuler conceded to Democratic Rep. Tim Bishop in New York’s 1st Congressional District about the same time as Emmer made his announcement. Altschuler gave up even though he was trailing by 263 votes. Now, that’s a REAL recount.)

• Overreaching: For as much as Sutton spouted off, for as much as Trimble blindly challenged ballots that two members of the Canvassing Board called “ludicrous,” in the end, Emmer didn’t push it, didn’t overreach. Good for him.

The recount was automatic by state law. Of course, Emmer could have waived it. (Although Sutton might have had a thing or two to say about that!) And, of course, once the canvassing of voting machines statewide showed that he was nearly 9,000 votes behind, common sense might have suggested he give up then, two weeks ago.

But the recount took place, and, as with Franken-Coleman, it allowed for the reality of one man’s victory and another’s defeat to settle into the public consciousness. That is a good thing, not a bad thing. Democracy works slowly for a reason. And despite DFL fears and angst, Emmer gave up when he had to. No harm, no foul.

• The future of former Chief Justice Eric Magnuson: His representation of Emmer raised some eyebrows in the Twin Cities legal community, just two years after being on the Canvassing Board itself and just months after leaving the Supreme Court.

If the tension last week between him and still current Supreme Court Justice Paul Anderson was any indication, many other lawyers in the state were aghast at Magnuson jumping into an election fray so soon after leaving the bench.

Today at the Canvassing Board, Justice Anderson apologized to Magnuson for his strong words of last week and said Magnusion was “the vessel” though which he was delivering his message about frivolous ballot challenges.

But it could be that Magnuson — still re-integrating into the Twin Cities bar after his short stint on the bench, still gathering new clients for his law firm in a competitive legal marketplace — dodged a reputational bullet with Emmer’s concession.

• Rolled again? As for the Dayton team, it was handed a solid hand, what with a 9,000-vote lead. But if GOP boss Tony Sutton was worried about “getting rolled again” by the Democrats lawyers, it might be that he was.

For all the big talk and big hirings of Magnuson and D.C. power lawyer Michael Toner, the Dayton team outdid the Emmer team, winning the public relations battle once more as the DFL data machine continued to show that Dayton’s lead was solid and growing.

Same squad Franken used, but with some new roles, this time led by calm and steady Minneapolis lawyer Charlie Nauen, who had the wisdom — and DFL dollars — to bring in what is becoming the sort of Rolling Stones of recount lawyers: Washington’s Marc Elias, Seattle’s Kevin Hamilton and longtime Nauen colleague David Lillehaug, who played more of a background role this time.

Elias, who quarterbacked the Franken team, is the sort of Mick Jagger of recount lawyers, a showman, out front, arms flailing, emotions on his sleeve. He won over the Supreme Court in his one argument this time ’round. Hamilton is the Keith Richards, always waiting for that solo moment, which Hamilton was anticipating if and when Emmer would, indeed, go forward and file an election contest. A contest would have meant another trial and another Hamilton solo moment.
Perhaps Mr. Sutton wasn’t rolled this time, but rocked-and-rolled.

• The final Emmer scene: Only in Minnesota would reporters bundle up, attempt to get their frozen pens working, worry about their tape recorders icing over, but stand in snow awaiting a gubernatorial candidate’s concession. Gotta love it.

It was a gloriously cold and sunny December day in semi-rural Delano, and Emmer didn’t even wear an overcoat. As he addressed the shivering jackals, a sign near his front door obviously held meaning for his large and attractive family and, perhaps, had meaning for the state as it goes forward.

Recount 2.0: With Emmer bowing out, what it bodes for future — and what it (might have) meant