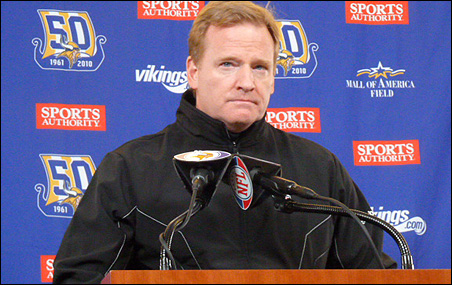 MinnPost photo by Jay Weiner
Roger Goodell on a Vikings stadium: “We had a series of meetings today … they were all productive.”

Before the blizzard came and the roof collapsed, before the Vikings played one “home game” in Detroit and another at the Gophers’ stadium last night, Roger Goodell already had made his plans.

Two weeks ago, word spread that the NFL commissioner, recently labeled the most influential person in sports by the trade publication Sports Business Journal, was set to visit the Twin Cities and lobby for a new Vikings stadium.

Five days later, the Metrodome deflated and the Purple stadium issue, long percolating, moved to a serious simmer. Call Goodell’s timing remarkably fortuitous, but also noteworthy. History shows that when a league commissioner shows up, sports facility debates are in their final chapters.

It seems as if we are moving into that turbulent phase.

Ninety minutes before game time Monday, as the wind chill remained at a balmy 9 degrees and the afternoon snows tapered off to a wimpy shower, Goodell didn’t talk tough, just clearly.

The former public relations intern at the NFL who worked his way up to league CEO had his talking points down pat after meeting with Gov.-elect Mark Dayton, a score of CEOs who belong to the Minnesota Business Partnership, Speaker Kurt Zellars, DFL leaders Tom Bakk and Paul Thissen, and some union leaders.

Asked if he warned Dayton that if no deal is struck in 2011, the team could move, Goodell didn’t bite, repeating, “We are all working to try and find solutions.”

But the son of U.S. Sen. Charles Goodell of New York added that he was willing – “more than happy” – to play a role in helping local political and business leaders figure out a plan.

Goodell visited the damaged Dome – the condition of which he called “quite startling” – but didn’t meet with representatives of the Metropolitan Sports Facilities Commission, which owns and operates the Dome. As the Vikings landlord, the commission has control of the team’s lease through the end of the 2011 season.

As the calendar turns to January, the expectation is that the Legislature, now controlled by the Republicans, will have to generate a stadium bill, not the new governor. Dayton said as much Monday after meeting with Goodell and Vikings owners Zygi and Mark Wilf.

Funny how that works. The pro football stadium dilemma – virtually ignored by Republican Gov. Tim Pawlenty over the past eight years – is now fully in the lap of the GOP Legislature.

And it was Dayton, not Goodell, who ratcheted up the potential pace, telling reporters, according to the Star Tribune, “I really believe 2011 is the final opportunity for all of us to put forward a proposal … I think the writing’s on the wall. We need to get it done in this session.”

The governor-elect told reporters a few others things, some curious:

* “User fees” could be in the mix. That would be, among other things, ticket taxes and taxes on sports memorabilia and, maybe, hotel-motel, car rental “voluntary” taxes. These are revenue streams oft-mentioned in past Minnesota stadium plans.

But, when sharp pencil is put to paper, these slices never seem to add up to a full finance plan. Other forms of publicly generated dollars enter the package.

We await a plan that adds up.

* Dayton also said that the team needs to name its preferred site “within weeks,” according to the Pioneer Press, and state its preference between a roofed stadium or open-air facility. This is a marching order the Vikings earlier received from legislative leaders.

Presumably, the public sector will have a say in the site, too; after all, public money is bound to be used, and there is sure to be an argument that this stadium is a public asset.

Related infrastructure costs must also be considered. If it’s all private, the Wilfs can pick their location; if it’s mostly public, you’d think the public sector might get a vote.

Zygi Wilf, who watched the game on the sidelines without a hat, told the Star Tribune’s Sid Hartman that he is opposed to a roofed stadium. “Football should be played outdoors,” Hartman quoted Wilf as saying.

No roofs at all?

Hmmm. Let’s try to put this quickly into perspective.

Most political observers believe a roofed stadium is the only path to getting votes from lawmakers in Greater Minnesota, even if it increases the cost of the facility.

An unroofed Vikings facility would mean three open-air stadiums (Twins, Gophers, Vikes) built in the Twin Cities in a 10-year period at a cost of – let’s say, $1.5 billion or more – with none capable of hosting large indoor events.

Add it up and, on an annual basis, all three roofless stadiums — combined — might be able to play host to not many more than 100 to 120 events every year. But a new Vikings’ covered stadium would be more expensive to build and maintain. This is going to be a key component of the final debate.

Watching this all unfold during the opening weeks of the legislative session as the lawmakers wrestle with a $6 billion deficit should be … well, fascinating.

So, it seems, a stadium finance stew needs to be concocted with a collection of ingredients and some left by the wayside. Apparently, there will be no new statewide taxes. Despite expected conversations about increased state-backed gaming, there’s a split within the GOP on that. While some Republican lawmakers have their eyes on a Minneapolis Convention Center tax, city mothers and fathers are, so far, publicly opposed to having that in the mix. Then, there are various user “fees” for stadium customers, fans and tourists that could be thrown in.

If the game at TCF Bank Stadium was some sort of test run for next year – with the ‘U’ stadium an extended-stay hotel for the Vikings while they await a new stadium — Goodell didn’t want to go there. Not yet.

“Well, obviously, [the Dome] is still not repaired,” he said. “That will become our focus obviously once we get past this game.” Monday’s game against the Bears was the Vikings final home game of the season, and that Dome lease is in place for next season, so let’s see how this plays out.

Later, Goodell added that if a new Vikings stadium were built on the Dome site and TCF Bank Stadium needs to be an interim home, “those discussions are ones we will have to have.”

The Vikings relocating to another city? Nary a threat.

“I certainly hope not,” he said. “Our focus is entirely on making sure they are successful here in this market.”

Two football-related issues were raised during Goodell’s news conference that could affect the upcoming legislative debate.

One is the NFL’s collective bargaining agreement with its players union, which is set to expire after this season. “We are not where we need to be,” he said. “We are not as close as I would like to be.”

A 2011 season in doubt – a stadium debate tainted by an owners’ lockout — will not help stadium supporters at the Legislature.

A component of the negotiations between the NFL Players Association and league management is extending the regular season to 18 games. That raises the possibility of the regular season and playoffs going a bit later into the winter.

Might that make a retractable roof even more of an issue in the stadium debate, despite Wilf’s protestations? Possibly.

As romantic as outdoor football during Christmas week may seem – and it was idiosyncratically Minnesota fun to the hilt — it wasn’t exactly cozy last night in the ‘U’ stadium. More nostalgic.

Former Vikings coach Bud Grant was at midfield for the game’s opening coin toss, as if to signal that, indeed, this Vikings game was a throwback. And then at halftime – when the 50 greatest Vikings were honored in this, the Vikings’ 50th season – Grant walked slowly back onto the field without a jacket and only in short sleeves, as if he were about to mow the lawn. Ten degrees colder, and Coach Grant might have been in his underwear.

At that moment, the fading snow seemed to pick up to honor “The Old Trapper,” an icon for outdoor football, a symbol of a sports franchise – even a state — that still needs to decide what it wants and how to get it built.