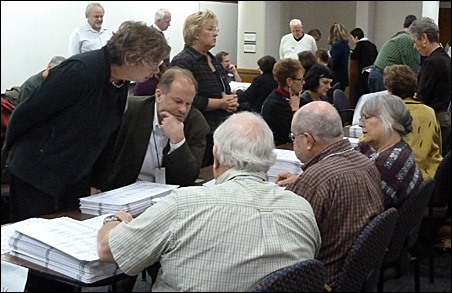 MinnPost photo by Jay Weiner
Recount scenes like this played out throughout the state this week.

The State Canvassing Board met again today, and the two-hour long session ended with hieroglyphics. It was a perfect conclusion to a week that was difficult to decipher.

The “hieroglyphics” were the crib sheet that then-Chief Justice Eric Magnuson used when he was a member of the State Canvassing Board in 2008 on the Al Franken-Norm Coleman recount. It helped him to remember what markings on challenged ballots he found acceptable or not to determine a voter’s intent.

This afternoon, Magnuson was on the other side of Room 10 in the State Office Building, the candidate side, representing Republican Tom Emmer. Magnuson was being pressed by Supreme Court Justice Paul Anderson, a member of this year’s Canvassing Board.

It all came down to this: The board, at Emmer’s urging, decided to allow the Emmer side to examine the so-called frivolous challenges that elections officials statewide had set aside. Emmer’s team challenged more than 2,800 ballots for reasons that judges in 87 counties thought were, essentially, against the rules. Magnuson for two weeks has wanted to get a look at all of those challenges.

Board allows challenge review
Secretary of State Mark Ritchie was resistant, but the entire board — Anderson, fellow Supreme Court Justice David Stras, Hennepin County Judge Denise Reilly and Ramsey County Judge Gregg Johnson  — decided today to give Magnuson and his colleagues a chance to review the frivolous challenges their own folks made, and then to withdraw as many as possible. Meaning most.

It was Anderson who verbally pushed Magnuson up against the wall and sought assurances that the Emmer side would withdraw as many challenges as possible to keep the board on schedule; the review of all challenges — even responsible ones — is set to begin next Wednesday. Magnuson assured his former colleague he will uphold his lawyer’s oath to act responsibly.

Meanwhile, DFLer Mark Dayton’s lawyer pushed, and pushed hard, to keep the recount proceedings moving and to hold the Emmer side and its lawyers accountable if it doesn’t. He noted repeatedly that the Dayton side withdrew all of its frivolous challenges and that it was ready to move on and see this thing to a conclusion on Dec. 14. They want Dayton in office on Jan. 3, as the state Constitution demands.

The afternoon meeting — with the snow falling outside and the highways cluttered — was the verbose final chapter of the first week of what is evolving into a more protracted recount than, frankly, this gubernatorial election deserves.

According to the reliable data compiled by the Dayton campaign, the DFLer picked up about 300 votes during the hand recount. That’s more than Al Franken gained on Norm Coleman during the 2008 recount, but it’s as if no one on the losing side is noticing.

On the one hand, this morning at a news conference Rep. Emmer admitted the recount is going swimmingly, the “mechanics” are fine and the numbers are what he expected. The man is losing, and he can’t win on the number of validly cast votes.

But he’s got two issues … for now.

One is the reconciliation issue, which has already been shot down by the Minnesota Supreme Court.

He says he’s waiting for the court’s opinion that explains the ruling. Most legal observers say the court spoke loudly when it summarily rejected Emmer’s attempt to halt the recount process with this issue. It took them all of 90 minutes to say, “No.” All that’s left are the details. Emmer and Magnuson say the details might inform them on any decision to take this thing to court.

And the other hornet in Emmer’s bonnet has to do with the State Voter Registration System. There’s a claim from him — and previously from the state GOP — that the SVRS is not up to date and that, somehow, “thousands” more votes were cast than people were registered in the 2008 election. Emmer’s also got some concerns about such a presumption in 2010, but there’s no evidence of such a discrepancy. In just about every county, votes are matching up with voters. 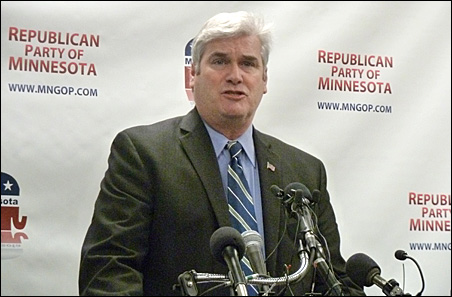 Indeed, Emmer and state GOP Chairman Tony Sutton have repeatedly used numbers that are similar to those used in a lawsuit brought against Ritchie in 2009, and summarily dismissed by the Minnesota Supreme Court in an opinion written by Magnuson himself.

But we digress from the week’s events, which, as Emmer said, went pretty well, except for the frivolous challenge tsunami in Hennepin County that now will be calmed down. Emmer’s folks are going to head to the Government Center Saturday and review all their frivolous challenges. They will report back to the board by Tuesday with those they will withdraw.

What flashes before our eyes as the week ends?

Week filled with drama, messages
As always, it’s the drama of daily press briefings and releases and the messaging from both sides. Fascinating.

The best release of the week came from the always-bombastic GOP chairman Sutton. He accused Hennepin County Elections Manager Rachel Smith of intimidating Emmer recount table workers. This was a bit like Bambi scaring Godzilla. Smith, the state’s most petite elections manager, countered — in her nasty way — that the only thing she can intimidate are the mice in her office. A political exchange for the ages.

The mood of the week was set in recount venues from Shakopee to St. Paul, from Hastings to Minneapolis. In many cases, on most days, the recount rooms felt and sounded like card rooms at Canterbury Park or gambling halls at rural casinos. Many older people — the judges — counted ballots, almost as if they were shuffling cards. Around the tables sat four or six observers and candidate reps, eyeing the ballots as they would the dealer. There was a bit of hum in most places, but a buzz at the busy center in Minneapolis. Odd scenes of democracy. 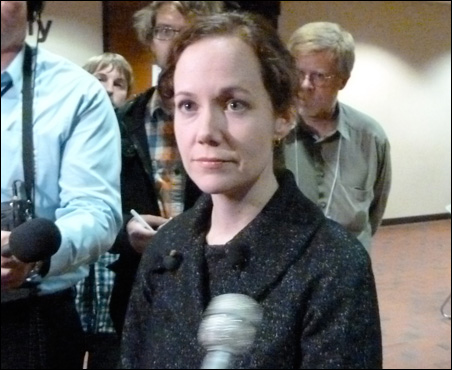 The contrast of the week was the continued discipline of the Democrats and the decentralized nature of the GOP.

Picking up where they left off in 2008, the DFL-side lawyers and data team tracked everything at the hundreds of recount tables statewide. Lawyers and operatives at specific sites weren’t allowed to talk to the media. All messaging came through recount director Ken Martin, who talked of seeking closure, of getting the presumptive governor, Dayton, working for the state — and of the real bottom line: 9,000 votes is an impossible number to overcome in recount terms.

On the Republican side, messages came from chairman Sutton, a little bit from Emmer, some from longtime GOP lawyer Tony Trimble, and then others — via firm legal letters and cordial public talk — from Magnuson. They were not always singing off the same sheet.

This “diversity” from the GOP kept open the door that something will be coming from Emmer after the recount. That’s because it’s continually hard to tell who’s making the decisions. Emmer says it’s him. He said today he has no plans now to bring an election contest, that is, a lawsuit. But Magnuson has never said that, nor Trimble. And just two days ago, Sutton hinted that this recount is headed toward court.

Justice Anderson today goaded Magnuson into revealing whether he had “a couple of arrows in your quiver.” This uncertainty should be unnerving to the electorate which, it seems clear, narrowly elected Dayton.

Still, the most certain and inspiring event of the week came in Otter Tail County, and we wrote about it.

There, auditor Wayne Stein looked high and low for a single missing ballot and found it stuck in a voting machine. Today, following all the rules, Stein’s staff counted the ballot.

It was for Tom Horner. (Remember him?) No one challenged it.