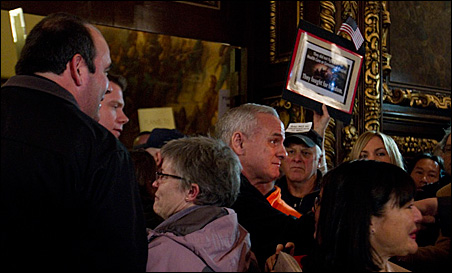 MinnPost photo by Terry Gydesen
Gov. Mark Dayton was the calm man in the middle at this morning’s lively event.

“Sir,” the trooper was saying, calmly, “I’ll give you the sign back when we’re done here.”

“That’s not good enough!” a supporter of the old man was saying.

There was more shouting. The trooper remained calm. The old man’s spouse tried to calm her husband with only limited success.

Special guests — who had been invited to watch Gov. Mark Dayton sign an executive order aligning Minnesota’s health care for the poor with expanded health care assistance — were having difficulty getting past the protesters and into the room.

Sen. Linda Berglin, the state’s godmother of health care for the poor, was the last to squeeze through the throng of angry people. She was ashen faced.

Dayton’s aides surveyed the chaos with looks of concern.

“My hands were sweating,” said Katie Tinucci, who heads the governor’s communications office. “We didn’t have any idea what he [the governor] was going to do” about the overflow, passionate throng.

Dayton entered the room promptly at 9:30, when the signing ceremony was to begin. (No matter the situation, Dayton takes pride in being prompt.) He surveyed the scene.

He has wandered the state for years running for various political offices. He often has spoken of the wonders of democracy and listening to the people.

Today, he showed again those are not just the empty platitudes of an old pol.

Dayton didn’t cut and run. He didn’t quickly sign and move on. He didn’t order security to clear the room.

Instead, he spoke quietly.

“I’m not going to speak any louder,” he said, adding that if people wanted to hear what he had to say they’d have to be silent.

There were a few boos — and there were cheers from the governor’s supporters.

Nobody had seen anything like this at the Capitol before. 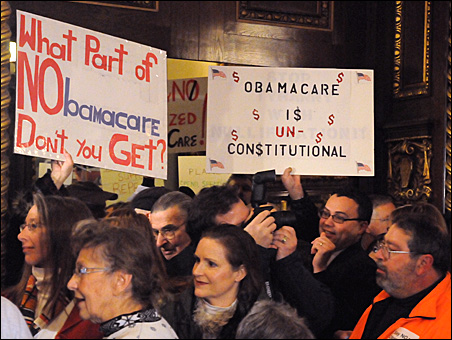 MinnPost photo by James Nord
Protesters — and supporters — crowded the room for the signing.

Yes, there have always been protests — sometimes loud, but not in this formal room. In this room, governors traditionally have held news conferences in front of the media and with only invited guests. Security people traditionally had kept all others out.

But not this day. Angry people — some very angry people — were in the room. Dozens more were trying to enter.

Dayton couldn’t have expected this.

Not even the organizer of the protest, Twila Brase, who heads an organization called the Citzens’ Council for Health Freedom, expected this turnout of passionate protesters. She had started emailing people — Tea Partiers and other “Obama-care” foes last Friday.

“I didn’t have any idea how many would come,” she said.

The new governor then silenced the crowd with a most extraordinary invitation. He invited those protesting to come forward and share his podium. He would allow representatives from their group to speak, after he had spoken.

“This is an office where all points of view are honored and respected,” Dayton said.

“What a surprise that was,” she said after the signing. “As far as I know, it’s never happened before. I think people were appreciative, but it didn’t change their opinions. But it may have taken the edge off of things.”

There’s no doubt about it. Dayton’s invitation did calm the anger.

The governor spoke of why he was going to sign the two executive orders. This signing, by the way, was no surprise. For months, Dayton had promised that signing the orders that change Minnesota’s health care for those in need was going to be his first official act.

Brase spoke about why she thought it was a bad idea.

An invited guest spoke of the appreciation she had for the fact that Dayton was going to sign the orders, which supporters say will save thousands of health care jobs in the state and given thousands of uninsured Minnesotans access to health care.

Another opponent — a vet, who admitted he received Veterans Administration benefits — spoke against the change.

“It’s not in the Constitution,” he said, angrily.

When Dayton supporters hooted, the governor stepped in.

He asked that people applaud those they agreed with but remain “respectfully silent” of those they disagreed with.

“This is the people’s room,” he said of the reception area, which has been treated as a quasi-private room by previous governors.

Another supporter, a young woman who had watched her brother die of cancer for lack of health care insurance, spoke appreciatively of the fact that Dayton was going to sign.

Another foe, a young man, spoke, saying that churches, not the government, should take care of the health of the poor.

Then, Dayton did another remarkable thing. He thanked ALL who had come.

Those legislators received considerable abuse from their peers on both sides of the aisle. Conservatives didn’t like the fact that the power of whether to move Minnesota into the federal program would be handed to the next governor. Liberals thought that their leaders had caved in to Pawlenty.

Dayton thanked the special guests, those involved in health care for the poor, who stood behind him for the ceremony. And then he thanked those who had come to protest.

Democracy is often “noisy,” he noted.

It was, it should be noted, especially noisy from the lungs of one toddler, who screamed throughout part of the ceremony.

“His mother couldn’t get him out of the room,” Brase said.

That’s how tightly packed the room was, and how unwilling many were to even make room for a mom and screaming kid.

Surely, Capitol security and his staffers will try to talk Dayton down from this position that events like today’s should always be open. The anger of the protesters was genuine, and heartfelt. Many in the crowd believe they have God and the U.S. Constitution on their side.

Even Republican legislative leaders were trying to raise constitutional questions about Dayton’s signing of the documents. But those leaders — Sen. Warren Limmer and Sen. David Hann — were in a rather uncomfortable spot. They were criticizing Dayton for doing what he had promised to do. At the same time, they were trying not to be critical of Pawlenty, who had agreed to allowing the executive orders to be included in a compromise bill.

Pawlenty had refused to sign the orders. Had Republican Tom Emmer been elected, he would not have signed the bill, he has said. (Independence Party candidate Tom Horner had pledged that he would sign the orders.)

Dayton, after speaking and listening, quietly did sign the orders, using a number of pens so that they could be passed out to supporters.

He signed, he smiled, he passed out the pens, he shook hands, and then he left “the people’s room.”

After that, the old man got his sign back, and the angry people melted away.