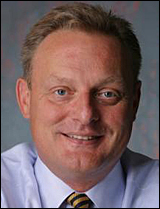 Exactly how it gets done remains a vast mystery. Mondale is known for working creatively to make the Twin Cities’ first light rail line a reality while leading the Met Council.  How he relates to the team, the Republican-controlled Legislature, the business community, the public and the governor will now become one of the intriguing chapters of the embryonic 2011 legislative session.

“I report to him, and I believe that I speak for him,” Mondale said of his outfront stadium role for Dayton.

First clear stadium point person since ’83
Under Gov. Tim Pawlenty, no clear-cut leader with any political or public policy gravitas was charged with being the administration’s stadium point person. In fact, not since 1993, when Gov. Arne Carlson appointed former state Rep. Henry Savelkoul to lead efforts to buy out Target Center and build a Twins ballpark, has a governor handed so much clout to one person to gain control of the mine-filled stadium war.

In his announcement today, Dayton said he picked Mondale to lead the commission, which owns and operates the tattered Metrodome, and also to attempt “to negotiate a new ‘People’s Stadium.’ “

Exactly what this “People’s Stadium” will look like remains to be seen.

But, as Dayton’s stadium voice, Mondale said in an interview this morning, it generally means “that the benefit to the public outweighs what the public is paying.” It also means that a new stadium won’t be a “Vikings stadium,” per se, but also capable of playing host to community events and such things as high school football and college baseball.

Automatically, that implies that Dayton favors a domed facility, something the Vikings do not. As the father of a former high school pitcher and now a hurler for Macalester College, Mondale has sat through many a game at the Dome watching amateur baseball while it snowed outside.

“I am well aware of the importance of that building or any building like it to the community at large,” Mondale said, thus agreeing with many lawmakers at the Capitol; any new stadium needs a roof of some sort.

As for other specifics of any Dayton stadium concept  —  from the use of gambling revenues or other taxes, to location to expected cost —  Mondale had no hints today.

“He wants to see what the Republicans in the Legislature will come forward with,” he said.

Sen. Julie Rosen, R-Fairmont, who will lead the stadium effort in the Senate, told MinnPost earlier this week that she is weeks away from nailing down a bill. House members are also working on something. The Vikings continue to work on determining their preferred site and funding package.

The Sports Facilities Commission, which Mondale will now lead, has shown a preference for building a new facility on the current Dome site.  Mondale said he’s open to stadium location, as is the governor.

Mondale sees ‘latitude’ on making deal happen
Dayton is, rather, open to a vast array of ideas within the parameters of this “public benefit” rubric, Mondale said.

Mondale, 53, applied for the job. He acknowledges he’s a sports fan and one-time youth coach. He wanted to be back in public service. He said he believes that pro sports are “critical to our quality of life and regional competitiveness.”

He added: “I enjoy complex legislative and policy matters. I enjoyed getting the light rail done … If you combine how important I think this is and a passion for sports, for public service and for complex, perhaps controversial matters, this all fits up.”

As it turns out, Mondale is a boyhood friend of NFL Commissioner Roger Goodell.

Goodell’s father, the late Charles Goodell, was a U.S. senator from New York. Mondale’s father, Walter, of course, served as senator from Minnesota and then vice president. Ted Mondale and Roger Goodell attended John Eaton Elementary School in Washington, D.C., more than 40 years ago. But, Mondale said they saw each other a few years back.

That personal relationship between Minnesota’s new stadium ambassador and the NFL commissioner can only help. Goodell will be a key player in advising Vikings owners Zygi and Mark Wilf.  Expect Mondale to deal more directly with the Wilfs than with the team’s army of lobbyists.

Said Mondale: “I’m going to have very good access [to Dayton]. He’s very open to what I think. I don’t really have a lot of opinions here yet. I think he’s going to be willing to listen to what is possible, and what isn’t.”

So, work-wise, he is footloose and fancy-free. The Sports Facilities Commission job pays a minimum of $50,000 per year; that’s a rate set by the Commission’s finance committee nearly 20 years ago. Commission members can make adjustments based on the time commitment of the chairman, Executive Director Bill Lester said. Departing chairman Terwilliger has been paid $64,688 each of the past three years.

During his first hours on the job, Mondale was making the rounds, contacting legislators and labor leaders. He was making his calls from the Capitol, a touchdown toss away from the governor’s office.

On his plate: working on a new stadium, fixing a damaged stadium and extending a Vikings lease set to expire after the 2011 season. Being Minnesota’s Commissioner-of-Getting-A-Stadium-Built is a dirty job, but somebody’s got to do it.