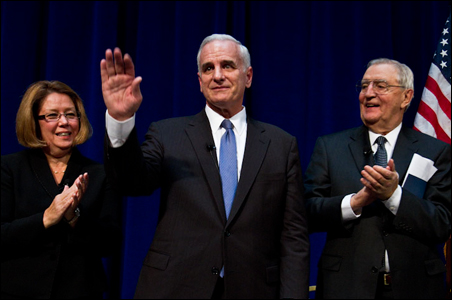 There were smiles all around today. Walter Mondale, Wendy Anderson, Roger Moe, Joan Growe and so many other silver-haired Democrats strolled around the Landmark Center shaking hands and telling each other that the long wait finally was over.

“How long’s it been since Rudy Perpich was here?” asked Mondale, laughing.

Answer: 24 years since Perpich had a swearing-in ceremony. Almost a quarter of a century since DFLers got to celebrate gubernatorial Inauguration Day ceremonies.

“Never a doubt there’d be another DFLer,” said Moe, the former Senate majority leader who made his own bid for governor in 2002.

Moe was laughing as he spoke. There was much laughter among the Old Guard today.

That it turned out to be Mark Dayton who would be the man to end the party’s long, long losing streak is a political stunner.

“Very seldom do you get a second chance in this business,” said Moe. “But he ran a very smart campaign. Simple and straightforward.”

When Dayton took the oath of office over the noon hour today, it marked the end of a campaign that had begun on Jan. 16, 2009.  Early on in that campaign, Dayton used the phrase “Tax the rich.”

Not even Dayton’s campaign manager, Dana Anderson, can remember where he first uttered the line. But it resonated with people in a way that no other message of a dozen other DFL candidates did.

He didn’t back off from that pledge in the speech he delivered after taking the oath of office.

Dayton budget plan will be ‘reasonable, balanced, painful’
“My proposed budget solution will be reasonable, balanced – and painful — because I see no easy alternative,” Dayton said. “I will insist that any final solution makes Minnesota’s overall tax burden more progressive, not more regressive.”

He tossed in a laugh-line for no-new-tax Republicans to chew on.

“To those who sincerely believe the state budget can be balanced with no tax increase — including no forced property tax increase — I say, if you can do so without destroying our schools, hospitals and public safety, please send me your bill, so I can sign it immediately.”

Overall, the speech was filled with progressive “we’re-all-in-this-together” values. Dayton, often not an eloquent speaker, was at the top of his game. He was passionate and concise. He delivered his talk, which his aides say he wrote himself, without blunders or the stumbling asides that sometimes mark his style.

This was a talk filled with rah-rah Minnesota. (The program even closed with everyone — the new governor, the Supreme Court justices, the people in the crowd — singing “The Minnesota Rouser.”)

Again, this marked a departure from the past. Gov. Tim Pawlenty, who was in the crowd, frequently used public speaking appearances to bash Minnesota’s big government and unfriendly business climate.

There was none of that from Dayton.

Over and over again, he challenged Republicans, DFLers, business leaders and everyday Minnesotans to work together.

He quoted Cicero: “In a democracy, the most important office is that of citizen.”

He challenged every business in the state to “adopt a school. … Meet with teachers, students and administrators and find out what they need to improve their school – now your school. A little money, a lot of help, technical expertise, remedial reading volunteers, adult mentors, new books, used computers. Make that school’s progress your shared responsibility.”

A challenge for everyone to become a volunteer
He challenged every Minnesotan in the state “to volunteer a part of one day, every month, at a school, hospital or social service agency.”

Dayton vowed that he and his running mate, Lt. Gov. Yvonne Prettner Solon, will be doing that volunteer work, too. They started this morning already, when the two of them served breakfast to children at the Paul and Sheila Wellstone School in St. Paul.

Dayton acknowledged that his margin of victory was minuscule. But he noted that many Republicans, who took over control of both houses of the Legislature, also won by small margins.

“We were all elected by just a fraction of Minnesotans, but our responsibility now is to serve all Minnesotans,” he said. “If we serve only the people who voted for us, we guarantee destructive division and we risk paralyzing gridlock. We must do better than that. The people of Minnesota expect better from us than that.”

• To bring more jobs to Minnesota.

• To balance the state budget fairly.

All these things are easy to say. Not so easy to do.

Wendy Anderson sees ‘advantages’
Yet, former DFL Gov. Wendy Anderson, author of the so-called “Minnesota Miracle” in the early 1970s, says that Dayton actually has some advantages coming into office. His main advantage is that the public understands the depth of the financial problem in ways it seldom has.

Anderson said he has hopes that the large numbers of new Republicans coming into the Legislature won’t be as tied down to the no-new-taxes mantra as the old Republican leadership has been.

He believes that two or three months into the session, the new Republicans will begin to grasp the problems the state faces and that “they will begin hearing from the school board members, the commissioners, the city council members back home who will be saying, ‘We need help.’ ”

Wishful thinking on the part of an old DFLer? Probably.

Yet, Anderson pointed out that it was conservatives who were in charge of both houses of the Legislature when the Minnesota Miracle became reality.

Certainly, Dayton reached out to the new Republican leadership often in his talk.

It also was a day filled with graciousness toward Pawlenty, who received a standing ovation from the DFL crowd when he was introduced.

Mondale, who acted as master of ceremonies, thanked Pawlenty for his service. Attorney General Lori Swanson – who, along with State Auditor Rebecca Otto and Secretary of State Mark Ritchie, was sworn in at the Landmark ceremony — also spoke kindly of the relationship her office had with Pawlenty’s over the years.

But there also was tough, though indirect, criticism of the Pawlenty years from Dayton.

“Ten years ago today, I was sworn into office in the United States Senate,” Dayton said. “Back then, our country was on top of the world and on course to stay there. Tragically, two massive federal tax cuts, two lengthy wars and two devastating recessions have damaged our pre-eminence and our prosperity. Here in Minnesota, two state tax cuts, two wars, and two recessions later, we stagger from one huge deficit to the next. 208,000 Minnesotans are out of work. And a state which used to lead most others in economic growth has fallen toward the bottom.”

The inauguration ceremony was concluded in less than an hour. Dayton then headed to the Capitol for a public reception.

But the look on his face showed mostly he’s itching to get to work.

The old DFLers, though, didn’t seem to be in such a hurry. They hung around the Landmark Center, laughing and shaking one another’s hands. They had waited a long, long time for this day and they clearly enjoyed savoring the moment.