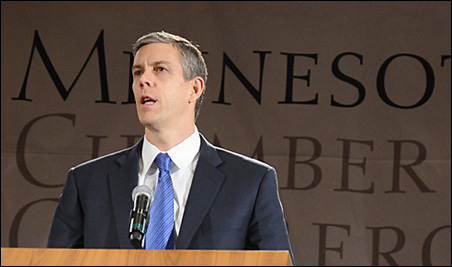 During an address today to the state Chamber of Commerce, he particularly criticized complacency in Minnesota and in the nation’s education system.

Duncan chided Minnesota leaders for not exhibiting a “sense of urgency” about the trouble facing education. He urged business leaders at the event to continue steady investment in education and to get involved in shaping policy.

“I think we’re fighting for our nation’s economic security,” he said.

“Other states were able to see much more movement [on the achievement gap] than Minnesota was,” Duncan said. Louisiana in particular has made strides tracking which teacher training programs are effective in tackling the gap.

“We do believe, as he believes, that this is urgent,” Sen. Gen Olson, R-Minnestrista, said in response to his comments. “The burden on my heart in education is closing the achievement gap.”

Early childhood education — the priority of some education-oriented lawmakers in St. Paul — and alternative teacher licensure can help bridge the disparity, Duncan said.

He expressed shock that no alternative teacher licensure law currently exists in the state. Legislation to address the issue is likely to be the first education reform passed this session.

In his remarks, Duncan also outlined several efforts his department and the Obama administration support, including the reauthorization of the No Child Left Behind act, a third round of Race to the Top funding and increasing K-12 and special education aid.

This year, the department is looking for $1 billion in new money to promote a “well-rounded education” for students that would embrace a wider subject curriculum, as well as doubling “parental engagement” funding to $280 million.

“We have to invest more, but in reform, not in the status quo,” Duncan said.

Race to the Top emerged as a $4.35 billion allocation in the federal stimulus bill aimed at turning around underperforming schools and increasing education standards. The funds were awarded as part of a competitive application process.

“We absolutely hope there will be a Round 3 of Race to the Top,” Duncan said, noting that additional dollars could go directly to school districts, rather than state governments.

Minnesota failed in its attempt to qualify for Round 1 funding, and offiicials decided not to try for Round 2. Gov. Mark Dayton, however, has expressed interest in going after any future opportunities for federal aid.

Duncan brought a sense of urgency and harsh honesty with him from Washington. The United States has a 25 percent high school dropout rate, he said, and the number of people graduating from college has floundered while other countries have increased their rates monumentally.

The Obama administration has made moves to reverse the trend, including $2 billion in funding for the nation’s community colleges, college tuition tax credits, simplifying federal financial aid forms and increasing Pell grant funding by $40 billion over the next decade.

President Obama’s goal to reclaim America’s No. 1 ranking on college graduates from a generation ago meshes with Duncan’s work to move the Education Department away from its history as a “large compliance-driven bureaucracy.”

Part of that would come from NCLB reform.

Duncan said the current structure is too top-heavy and punitive, where it should reward excellence and innovation. He called the act “fundamentally broken” and said certain provisions are “bad for children.”

“We need to get Washington out of the way,” Duncan said.

That sentiment trickles down from the state to the district level, as well. Republican lawmakers in the House support more local control for districts.

James Nord, a University of Minnesota student, is a MinnPost intern.