First District Rep. Tim Walz will hold a “Congress on Your Corner” event from 11 a.m. to 1 p.m. at Mocol’s Super Market in Mankato, while 5th District Rep. Keith Ellison will meet with constituents from 5 to 7 p.m. at the Global Market atrium in Minneapolis.

Both events are sure to attract a number of reporters, which raises the question: Are these mere “look at me” events in the wake of the shootings Saturday in Tucson that left six dead and Rep. Giffords hospitalized?

Both men sensitive to perceptions
Walz said he and his staff considered that some might have that perception but felt it was right to move ahead because it is “a show of respect.”

“Gabby and I have both been doing these sort of events,” Walz said. “They’re something we have talked about.”

So, it felt right to Walz to go ahead.

Ellison, too, was sensitive to how a public event held just days after the shooting would be perceived.

“In politics, there’s always someone who is going to try to find fault with something you’re doing,” he said. “But the prevailing attitude we’re hearing is ‘thank you.’ We decided it’s important to have a public event as a confidence builder for the public. People want to be able to express their feelings about what happened in Tucson in a public forum. They want to be able to be with other people. … Look, this is something we’ve done all the time. The only difference is that this time we’re calling it ‘Congress on Your Corner’ as a way to honor Gabby.”

Symbols can be important.

But the key question is whether Congress will move beyond symbols and enact legislation that might have prevented someone from having such a weapon or at least limit the amount of carnage that could be done.

Heather Martens, executive director of Citizens for a Safer Minnesota/Protect Minnesota, is urging that organization’s supporters to push members of Congress to move beyond talk and symbols.

Wrote Martens: “Protect Minnesota could not agree more with the words of Pima County Sheriff Clarence Dupnik: ‘The anger, the hatred, the bigotry that goes on in this country is getting to be outrageous.’ However, rhetoric alone did not cause the death of six people, including a nine-year-old girl. We have a political culture where people who are motivated to commit violence because of overheated rhetoric have shockingly easy access to weapons of mass murder …”

Martens went on to urge supporters to connect with their representatives and senators to write “sensible gun laws.”

Walz treading carefully on gun issues
Walz is in a particularly interesting spot in what is certain to be an emotional debate in coming weeks. He’s a Democrat but he’s received the endorsement of the National Rifle Association, which traditionally has opposed most restrictions on weapons.

“A foot in both camps” is how Walz describes his position.

And he has been treading carefully.

Emphatically describing himself as “a strong supporter of the 2nd Amendment,” he says he already has heard from people who typically oppose gun restrictions.

“I was at the gas station the other day and a guy, who usually is a strong 2nd Amendment guy, said, ‘I wonder if we really need the [33-round] clip,” Walz said.

Walz didn’t say he’d necessarily support legislation to limit the size of magazines. (Under federal gun control laws that existed from 1994 to 2004, the magazine size was limited to 10 rounds of ammunition. But those restrictions expired, and now there are no restrictions on magazine capacity.)

But the 1st District Congressman did say he’s had conversations with New York Rep. Carolyn McCarthy, who is proposing legislation to restrict magazine capacities. Walz said he “was interested” in her legislation.

In a recent interview with Salon.com, McCarthy said the NRA already is opposing her measure.

“The NRA is out there already saying it’s a slippery slope — that if we take away the large magazine ,we’re actually trying to take away their guns, forgetting the Supreme Court already has said that everyone has a right to own a gun,” she told Salon.

There were red flags regarding mental stability of Jared Loughner, the alleged assailant. He’d been rejected by the military and thrown out of community college because of his behavior. Yet, he reportedly had no trouble purchasing a weapon.

Mental health (the question of determining who is stable and who isn’t?) and gun ownership are difficult issues to legislate.

“But we should be able to find some sort of balance,” Walz said.

One piece of gun-control legislation that doesn’t seem to have much of a chance is a concept being pushed by New York Rep. Peter King. Though not yet specific, King’s idea would make it illegal to “knowingly carry a gun within a thousand feet of certain high-profile government officials.”

Both Minnesotans seem to understand that most of us don’t want emotionally shaky people carrying weapons loaded with 30-round clips within a thousand feet of us.

Ellison sees support for ‘narrow’ new legislation
Ellison does believe the Tucson tragedy can move from symbolic “Congress on Your Corner” meetings to legislation so long as Congress moves quickly and keeps any legislation “narrow.”

Ellison thinks, for example, that the magazine capacity bill can pass.

“I think it’s hard for even the most ardent NRA member to say they must have the right to the large clips,” Ellison said. “There’s no legitimate reason for 33-round clips, or silencers.” 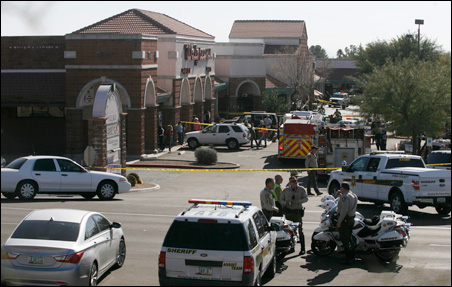 REUTERS/Eric Thayer
The scene outside a Safeway in Tucson, Ariz., hours after Rep. Gabrielle Giffords was shot Saturday.

He also believes that there must be ways to at least make it more difficult for someone with a trouble past like Loughner’s to legally purchase a weapon. Perhaps, Ellison said, someone like that would have to go through an interview with a police officer before being allowed to make a legal purchase.

“I know that people will say, ‘Well, if he can’t buy a gun legally, he’ll just go to the black market,’ ” Ellison said. “But we should at least make it more difficult.”

Meantime, both Walz and Ellison said that’s it’s vital for politicians to hold events like today’s.

Like most members of Congress, both have been through very heated public forums on the issue of health care. Security at those events, both said, wasn’t so much to protect the public officials, but to make sure emotionally charged people didn’t harm each other.

There likely will be even more security at future events.

But everything a member of the Congress does can ultimately become a public event. Everything is a version of “Congress on Your Corner.”

“I go into a grocery store and I’m standing in the cereal aisle,” said Ellison, laughing. “I’m thinking, ‘Hmm, Cheerios or cornflakes?’ and all of a sudden somebody is talking to me. ‘I have this issue I want to talk to you about. It’ll just take a minute.’ Half hour later, they’re still talking. My kids won’t go to the grocery store with me anymore.”

With public mood, Walz and Ellison walk a fine line in today’s ‘Congress on Your Corner’ gatherings