Brooklyn Park and Brooklyn Center brought in trauma experts to aid survivors of bloody African conflicts. Eden Prairie planned to shift 1,100 elementary school children for the sake of racial balance. Churches around the suburban Twin Cities opened their doors to worship services for the Sudanese, the Mexicans and the Liberians.

With a helping hand here and an erupting conflict there, metro suburbs have found themselves striving to accommodate more ethnic diversity over the past few years.

Now the trend the Twin Cities has known anecdotally is confirmed by new census data: Minnesota’s greatest proportional increases in foreign-born residents during the past decade came in the suburbs surrounding Minneapolis and St. Paul.

The economic, political and social implications are rolling through city halls, schools and the Minnesota Legislature.

Gone are the days when it was safe to assume that the suburbs were solidly white, mostly affluent and largely Republican while the inner cities were ethnic stews.

In Brooklyn Park, 19 percent of the population is foreign born, according to the latest estimates from the Census Bureau’s American Community Survey. That compares with 15 percent in Minneapolis and St. Paul.

The numbers of foreign-born residents have more than doubled in Scott and Carver counties during the past decade while remaining nearly flat in Ramsey County.

In other words, longstanding ethnic divisions are blurred as thousands of immigrants from Asia, Africa and Latin America put down suburban roots. It remains to be seen whether political lines also will change in the future.

Shaking geographic stereotypes
Indeed, this recent trend of immigrant settlements shakes geographic stereotypes that were firmly in place long before the 1940s when my Swedish-born father rented a duplex in “Nordeast” Minneapolis for himself and his Norwegian-speaking bride. There, they would be comfortably surrounded by other European immigrants.

You only need to visit Somali-run shops in Minneapolis’ Cedar-Riverside community to know that many recent immigrants still choose to live in inner city enclaves where they find others who share their languages and customs.

They help explain why Hennepin and Ramsey counties still are home to Minnesota largest immigrant communities. Nearly 10 percent of the residents of those counties are foreign born. 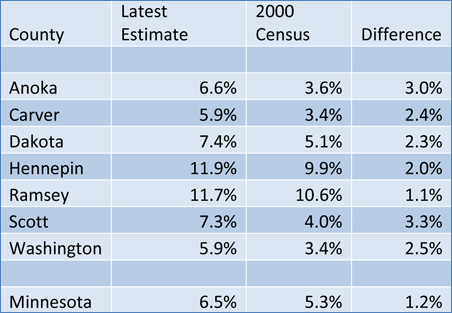 But the inner city concentrations of immigrants grew very little during the past decade. The growth spurt came in the suburbs. More and more, immigrants found homes in Anoka, Shakopee, Eagan and other communities ringing the core cities.

“The Twin Cities continue to be a gateway for new immigrants who stay and become new Minnesotans,” said Todd Graham, a demographic forecaster for the Metropolitan Council. “And many foreign-born Minnesotans do choose to live in the suburbs.”

Spurring the next generation
That development sets up the suburbs for an array of adjustments and challenges.

Immigrant families account for some of the fastest population growth in Minnesota. But as students, immigrants and their children have tended to need more encouragement to finish high school and go on to develop skills that can support the state’s economy into the future.

While there are many notable exceptions to that general rule, economists and demographers are pressing communities to meet the challenge of educating their newcomers so they will be ready to replace retiring baby boomers.

It’s a new challenge faced by pockets of Greater Minnesota too, not the suburbs alone. Recently-arrived immigrants have pursued food processing and meat packing jobs to transform small towns and cities throughout southern and western Minnesota.

But because the suburbs have led the growth during the past decade, they will be the communities to watch as the state confronts these challenges.

About 6.5 percent of Minnesota residents were born abroad, placing us near the middle of states in that regard. California was home to the highest concentration of immigrants, 27 percent, followed by New York, New Jersey, Florida and Nevada. The lowest concentrations were in West Virginia, Montana, Mississippi and the Dakotas (2 percent).

Minnesota’s overall immigrant concentration has grown a modest 1.2 percent since the 2000 census. But the Twin Cities suburbs claimed a disproportionately large share of that growth. In Scott County, for example, 7.3 percent of residents were born in another country, up from 4 percent in 2000.

About 42 percent of immigrant Minnesotans are naturalized U.S. Citizens. And 63 percent entered the United States before the year 2000.

Where do Minnesota immigrants come from? 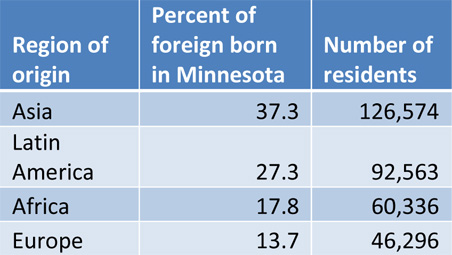 Asians make up the largest block of Minnesota immigrants. More than 126,000 Asians have come to live in the state. Next are Latin Americans followed by Africans.

The suburban growth in the numbers of immigrants doesn’t tell the full story of racial integration in Minnesota. African Americans and other native-born minorities are taking to the suburbs too. New details about the state’s racial mix will come early this year when the Census Bureau releases more data from the 2010 census.

Overwhelmingly European
Meanwhile, it should be no surprise that modern-day Minnesota overwhelmingly continues to look to Europe for its ancestry. Some 38 percent of Minnesotans are of German ancestry. Norwegians make up another 16.9 percent.

Does this one surprise you? The Irish (11.8 percent) nosed out the Swedes (9.6 percent) for third place.