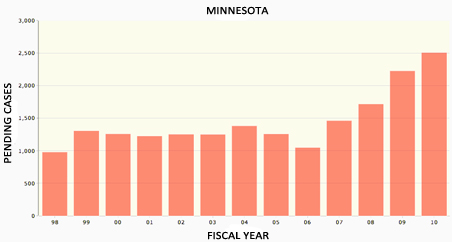 Source: TRAC Reports
The rise of immigration cases in Minnesota by fiscal year.

In December 2009, Osman Samatar found a sign on the door of his recording studio in the Somali capital of Mogadishu. The message: Continue your work here and you’ll be killed.

The fundamentalist group Al-Shabaab had forbidden music, but the business was his family’s lifeline. His brother Omar worked there too — and ignored the warning. Omar was killed. Their mother found him dead on the floor of the studio.

Samatar fled and was smuggled through seven countries before he arrived in the United States.

Nearly a year after leaving Somalia, Samatar sat before an immigration judge in a tiny courtroom in Bloomington, where immigrants come from all over Minnesota facing deportation and appealing for relief. He is trying to win asylum status — protection from being forced to return home.

Today Samatar is one of more than 2,500 people with an open case before Minnesota’s three federally appointed immigration judges. He’s entered an overburdened system struggling to keep up with increased immigration enforcement under a limited budget — a system further complicated by the judges’ differing standards for deportation.

Unlike federal district courts, immigration courts like Bloomington have not developed timeframes for different types of cases, said Susan Long, co-director of the Transactional Records Access Clearinghouse (TRAC), a Syracuse University-based nonpartisan organization. “No one really has a number on how much time that a case should take on average.”

Hearings for people stuck in Minnesota’s immigration court system have been pushed into September 2012. The average wait is 410 days — the 14th longest in the nation, according to TRAC. Add to that limited resources, friction between courts and government agencies, and even stalling by attorneys. Immigration lawyer Marc Prokosch explained that some attorneys use lack of preparation as a “tactic” to force an extended stay for their clients, especially if they feel they have a slim chance of winning.

The wait can mean a year or more in limbo, unable to make basic commitments or travel. And increased enforcement means people are funneled into the courts — and into this state of limbo — at record rates. The number of cases has increased by 46 percent since the end of fiscal year 2008, above the nationwide average of 40 percent in the same period.

Spike in numbers
Who are these people? They are immigrants who are undocumented, or have overstayed a student visa, or failed to file paperwork critical to their status. Some were pulled over for a traffic violation or detected in an administrative system somewhere along the line.

Most mornings in the Bloomington courtroom, two-dozen or more defendants cram into a waiting room. They drive or are driven from all corners of the state. Some sit with their attorney. Others will represent themselves.

Others are discovered in city or county jails. Immigrations and Customs Enforcement (ICE) is doing a much more thorough job of monitoring booking sheets at jails to check immigration status.

In the past two years, the number of people coming to court from a detention center has spiked.

“You used to see when someone was arrested for drunk driving they would attend their court date and be released — and never have any contact with immigration,” said Emily Good, director of the Refugee and Immigrant Program at the Minneapolis-based nonprofit Advocates for Human Rights.

According to Good, her organization is serving about 50 percent more people than two or three years ago, and cases where the defendant is detained account for much of that. For defendants in detention waiting on a decision from the Bloomington court, the state of limbo has a higher cost — for the government that cost can be measured in taxpayer money spent on detention. For the detained it’s another level of limbo altogether.

“I’ve heard it compared to the tax code,” federal attorney Tom Madison told MinnPost. “The [Immigration and Nationality Act] has become even more complex and there is a need for more and more longer hearings for individual cases.”

On a respondent’s first appearance before an immigration judge, he or she must answer their charges. Government attorneys bring allegations that “establish the person’s deportability,” explained attorney Matthew Armbrecht.

“If they deny [the allegations], the government has to prove it,” Armbrecht said. “If you admit you’re removable, you can ask for different kinds of relief.”

For most, relief means voluntary departure, which allows the respondent six months to leave the country on his own accord. Like all kinds of relief — asylum, adjustment of status, cancellation of removal — criteria must be met. The judge who hears the case must follow precedent, giving her or him little freedom in granting the relief.

Samatar, who belonged to a minority tribe in Somalia, has to prove that the threats against his life that caused him to leave Mogadishu are enough to secure him asylum status in the United States.

In the quest for asylum, a person in removal proceedings has to prove that returning to their home country would mean facing persecution (and possibly torture) by the government or a group the government is either unable or unwilling to control — if the persecution threat is based on the person’s race, nationality, religious or political beliefs or affiliation to a certain social group or category.

Mark Prokosch, Samatar’s attorney, doesn’t envy the judges. “The judge, she has to figure out if he’s a refugee or if he’s actually Al-Shabaab trying to come in and start a sleeper cell.”

The judges
The court’s three judges come from diverse backgrounds. The most recent addition is Susan E. Castro. She started her immigration judgeship in San Antonio in 1993, but her law career started more than 10 years earlier with a Minnesota legal aid organization called Centro Legal. Castro was one of the founders of the organization, which served as a low cost legal service for Latino immigrants — including those who appeared in her Bloomington courtroom — until it closed in April 2009.

Attorneys who appear before her have sensed an empathetic side. During a hearing in September 2010, a woman who entered the United States with an invalid visa appeared before Castro for her first removal hearing, Castro’s 15th hearing of the morning. The respondent was confused about facts, like the date of her wedding. She had acquired a visa to enter the United States as an unmarried dependent, but married before using it. Castro walked her through her rights and, on three separate occasions, pressured her to find a lawyer. “This is not an easy case to do alone,” she warned.

In a biographical piece written by Castro’s alma mater, the University of Minnesota Duluth, Castro said, “Many of individuals who appear in immigration court don’t have an attorney, and the judges have a greater responsibility to help them understand the process and their rights.”

Judge Kristin W. Olmanson, who has worked in Bloomington since 1999, comes from the now defunct Immigration and Naturalization Services (INS), which merged with U.S. Customs Service in 2002 to become ICE. She served as a trial attorney, assistant district counsel and assistant regional counsel for INS before being appointed to the Bloomington Immigration Court.

William Nickerson sees a different clientele than Castro and Olmanson. The judge, who previously worked in California, handles almost all of Bloomington’s detained cases. He graduated from University of Minnesota Duluth in 1971 and earned his doctorate at Western State University in California. He worked at a number of California law firms before ending up at the Lancaster, Calif. immigration court, located inside a detention center.

It’s difficult to measure one judge against another, but one indicator is asylum decisions. In the past two years, the national average rate of asylum denial is 55.4 percent.

Between 2005 and 2010, Castro denied asylum to 68.2 percent of cases which went before her, according to TRAC.

Of the Bloomington judges, Nickerson has taken the hardest line on asylum cases, denying 78.3 percent — a discrepancy that might be explained by the nature of the cases he hears.

The differences between the judges in the coming year may be affected by recent changes that have Castro and Olmanson taking on some of the detained cases; there are now just too many for Nickerson to handle alone.

That’s good news for immigrants waiting out a decision in detention. However, having the judges help the detained side means those with civil suits are pushed aside.

A case study
That’s what happened to an electrical engineering graduate student at the University of Minnesota, who was moved to the back of the docket so Castro could pitch in on the detained backlog.

The Nigerian student, who requested to remain anonymous since his case is still pending, unknowingly failed to file for residency status in the three months between when he arrived in the United States and when he turned 21, which meant he had no legal status at all. Afraid that pursuing the issue would mean deportation, he kept a low profile and focused on his studies.

“I was just floating around,” he said of the five years he’s spent studying and trying to get internships, which were unattainable because of his lack of residency status.

Unable to fully establish a life in the United States, the uncertainty pushed him to file a motion to reopen his case, hoping for some sort of resolution.

Instead of certainty he found his anxiety extended. One year. Then another.

By December 2010, he was hoping to be able to return to Nigeria and see his family. Instead, his final hearing was pushed back another year, postponing his travel plans indefinitely.

And in a busy courtroom, years of waiting could rest on the 30 minutes or so his attorney has to present before the judge. He’s already been through multiple lawyers who he believes just wanted his money. Now he’s got a lawyer he hopes he can count on.

“I never believed I could get in this immigration mess,” he said.

Although he obtained limited work authorization in August of 2009, and recently received his driver’s license, an uncertainty and anxiety remains. He doesn’t know if he will ever feel like a full citizen.

“I think I still have a good shot, but you still don’t know what could happen a year from now.”

This article was produced in partnership with students at the University of Minnesota School of Journalism and Mass Communication, and funded in part with a grant from the Ethics and Excellence in Journalism Foundation.

Voluntary departure: (most common) respondent has clean criminal record and the means to pay for own travel — given 120 days to leave if relief is granted before removal proceedings end, though judge has discretion in setting an earlier deadline; given 60 days to leave if granted at the conclusion of proceedings.

For non-Lawful Permanent Resident: present for at least 10 years, good moral character, no convictions that would make him/her removable, shows removal would be an extremely unusual hardship to immediate family members who are U.S. citizens or LPRs.

Asylum: must prove that he/she has or would experience persecution in his/her home country by the government or a group the government is unwilling/unable to control on the basis of the individual’s race, religion, nationality, political beliefs or belonging to certain social group or category, fear of torture