Like the scriptural prophet crying in the wilderness, the state economist and state demographer have warned Minnesota for two years that it must prepare for potentially devastating demographic waves.

Now, as elected officials in St. Paul wrestle with a $6.2 billion budget gap, demographer Tom Gillaspy and economist Tom Stinson have renewed their warnings in the context of upcoming budget decisions.

If you are getting ready to defend or debate the budget Gov. Mark Dayton is set to release on Tuesday – or, if you’re going to try your hand at MinnPost’s budget-balancing puzzle — you really should turn first to their new report, “The Long Run Has Become the Short Run: Budget Implications of Demographic Change.”

“The 2010s will see Minnesota transform from a young state to an old state, from a work-based economy to a retirement-based, entitlement economy. Many of the rules that govern how the world ‘normally works’ will change and a new set of rules of thumb for the ‘New Normal’ will take their place,” they say.

With the baby boomers retiring, nearly as many people in Minnesota will turn 65 during this decade as in the previous four decades combined. And the aging ramps even higher during the next decade.

Here’s that part of the story in a picture. (This graphic and others in this article were provided to MinnPost courtesy Tom Gillaspy and the Minnesota State Demographic Center.) 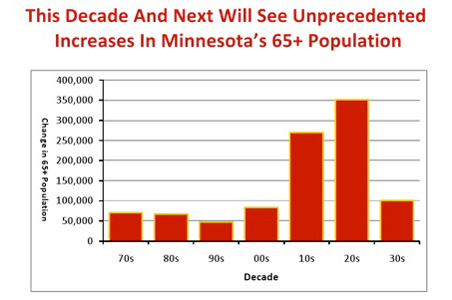 The upshot is that by the end of this decade, Minnesota will have as many people age 65 and older as children in K-12 schools. And unless the state finds new ways to deliver and pay for health care and other services for older residents, it will have to curtail those services or pull money away from education. 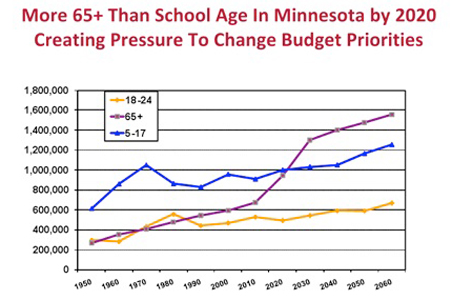 Meanwhile, growth in the labor force will slow dramatically. And so will the economy unless we find ways to make Minnesota’s workers more productive.

But there is one big impediment to increasing productivity: The next generation of workers doesn’t have the skills that will be needed to replace the retiring boomers. Improving their skills is an urgent need for Minnesota.

But that takes time and investment — you can’t order up a new team of doctors or registered nurses overnight or even over a year or two.

Further, the state has not taken steps to increase revenues in tandem with projected growth, let alone in numbers sufficient to invest in the next generation of workers. 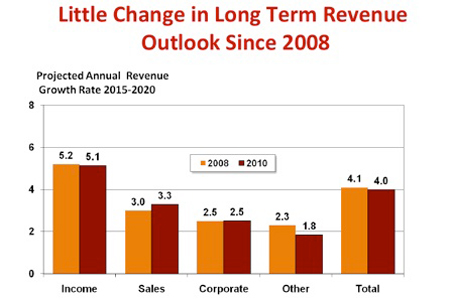 On top of these demographic factors, the Great Recession also slammed the brakes on growth for years to come. 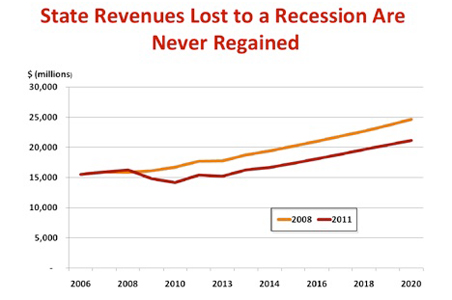 Here is the sum of all of these factors: Unless Minnesota breaks promises it has made to its elderly citizens, neglects the education of its K-12 students, finds new revenue or finds cheaper ways to deliver services, here’s how the revenue growth stacks up next to the projected spending for those two categories alone. 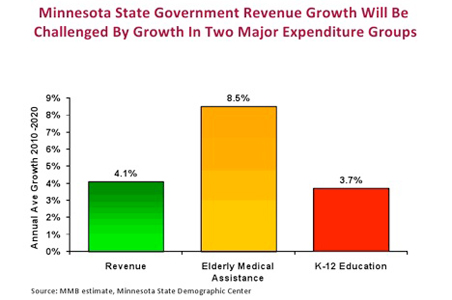 The spike in elderly medical assistance isn’t driven by the sheer number of retirees alone. A good share of it comes from inflation of health care costs. Getting a grip on that factor is a prime state and national challenge.

And the brutal truth is that Minnesota will be so boxed in by health care costs it will have little money left for other services. 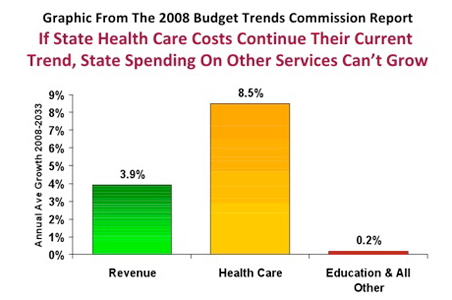 So there you have it. Something big has to happen in this state in terms of changing expectations or finding new strategies. If it doesn’t happen, something big will collapse.

Minnesota’s two prophets — Stinson and Gillaspy — were appropriately Minnesotan in stressing the strength of the state’s accomplishments.

“Minnesota’s experience since World War II has been remarkable. Minnesota went from a below-average education and below-average income state to a national leader in both measures. This relationship is not coincidental. Improving educational outcomes improved the quality of the workforce, matching the demands of the late 20th century economy. Minnesota’s achievement was in creating a well-educated, hard-working, easily trained, highly productive workforce that produces quality goods and services. By 2009, Minnesota ranked fifth in the nation in employment ratio, 13th in median earnings of full-time year-round workers, 10th in median family income and third-highest in cost of living adjusted income. … Minnesota also ranks 11th in the percent of the adult population with at least a bachelor’s degree and second in the percent with at least a high school diploma. Minnesota has performed well, with rising incomes led by rising education achievement levels.”

However, they end the report on an appropriately stern prophetic note:

“The most successful organizations and economies face a special difficulty during times of great disruptive change – the tyranny of success. The smugness that comes from past success can be a great pitfall. Often, the very factors that lead to past success can be the source of failure. Failures of leadership, vision, strategic focus and policy that lead to past success can become the Achilles’ heel as technological and market conditions change over time … Minnesota, as a successful economy, must avoid the tyranny of success if it is to be successful in the future. Future changes, led largely by demographic shifts, will be so disruptive that businesses and governments will require a new business model.”

Finding that new business model is particularly challenging for governments, they say. Unlike a business that can gauge what customers want, the state must determine Minnesota’s needs.

“The private sector has a means of dealing with organizations that do not get the wants/needs equation right,” they say. “Not so the government sector. Market forces do not directly give governments clues about whether the government is on the right course. For this, constant monitoring of progress towards a commonly accepted vision is necessary.”