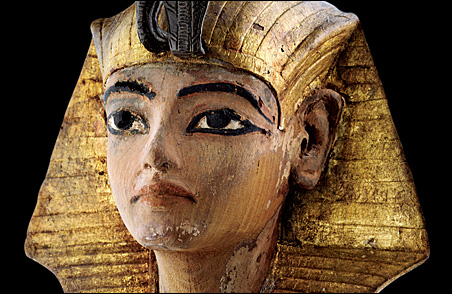 Copyright 2010 Sandro Vannini
This funerary figure of King Tut was found in the antechamber to his tomb.

If you’ve caught news of the looting of museums and archeological sites during Egypt’s protests, you might have wondered about the grand King Tut exhibit that is scheduled to open at The Science Museum of Minnesota Feb. 18.

You can relax on that front at least. Kim Ramsden, the museum’s co-director of public relations, said in response to my email request, “all the artifacts in the exhibition were already in the U.S. . . . We were not impacted by the current events in Egypt.”

It turns out that these particular Tutankhamun treasures have been in Colorado since June for an exhibit at the Denver Art Museum. That closed Jan. 9, and now some 100 artifacts from the golden days of the Boy King are enroute to St. Paul.

Catching looters
Still, if you cherish antiquities as much as I do, it’s heartbreaking to think any more of Egypt’s archeological treasures might have been damaged or carried off.

Some of Egypt’s most intense protests have been staged near the Egyptian National Museum in Cairo. A few years ago, I spent an awesome afternoon in that museum, raving and drooling over the historic wonders it holds — including Tut’s famous gold funeral mask.

Even then, I thought the museum’s security could have been tighter.

Now, the Egyptian government has dispatched soldiers to guard that museum and others around the country as well as some of the major archeological sites.

“Snipers were stationed on the roof of the building, and dozens of troops patrolled the grounds of the famed antiquities museum amid fears that the chaos sweeping Cairo could engulf the nation’s heritage,” the Associated Press reported.

Since Sunday, the soldiers have detained about 50 men who were trying to break into the museum.

“On Monday, half a dozen suspected thieves lay in a group on the floor of the entrance, their faces covered by a blanket,” AP said. “Guards said they were caught trying to enter.”

Looted treasures
While those attempts were foiled, the military arrived too late to spare the museum from earlier break-ins.

On Friday, looters ripped the heads off two mummies and damaged about 75 small artifacts, AP said. A museum administrator found the head of a small clay statue on a stairway. And cases containing a gold trinket and other small artifacts were broken.

Apparently unaware of the relative value of the various objects, the looters also sacked the museum’s gift shop where the jewelry and other items for sale typically are cheap replicas of the main exhibits.

The looters also came breathtakingly close to the fabulous King Tut treasures, according to Zahi Hawass, Egypt’s antiquities chief who is something of an Indiana Jones character in his own right.

Hawass maintains a blog. Because Egypt’s connections to the Internet were shut down over the weekend, he faxed an account of the break-in to colleagues in Italy who arranged for it to be uploaded to his blog site.

The intruders got into the King Tutankhamun galleries, he wrote. 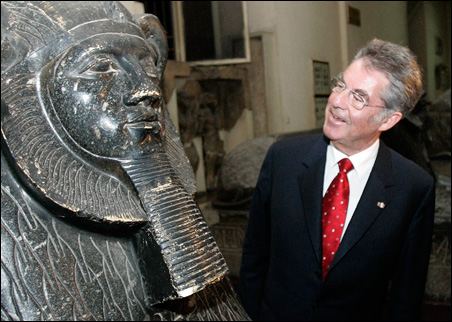 “Thank God they opened only one case! The criminals found a statue of the king on a panther, broke it, and threw it on the floor,” he wrote.

Reassuringly, he added: “I am very thankful that all of the antiquities that were damaged in the museum can be restored.”

You can see an AlJazeera report from the museum here.

Taking up arms
The looting story also has a heartwarming side.

Before the army arrived at the museum early Saturday morning, Egyptians were so alarmed over the threat to their national treasures that they grabbed makeshift weapons and created a human chain in front of the museum.

In the ancient city Luxor in southern Egypt, locals fended off a band of robbers who tried to break in and steal antiquities from the warehouse of the famed Karnak Temple on the east bank of the Nile, AP said. The group clashed with the attackers who arrived at the temple carrying guns and knives in two cars around 3 a.m. Monday, and arrested five of them.

Whole country is a museum
Elsewhere in Egypt, the Army was guarding 23 other museums and some archeological sites.

Still, Egyptologists told the Washington Post that they were worried about reports of ongoing looting at Saqqara, a famous site south of Cairo that is home to Egypt’s first stone pyramid and hundreds of tombs spanning 3,000 years.

“The potential for damage is far more extreme than in Afghanistan and Iraq,” two other countries that sustained looting of artifacts during the ongoing wars there, Fred Hiebert, an archaeology fellow with the National Geographic Society told the Post.

“Saqqara and Luxor are major tourist attractions, so there are signs pointing saying, ‘Valuable antiquities here,'” he said.

Indeed, Egypt is so rich in ancient treasure that securing all of it seems nearly impossible.

“The whole country is a museum,” Hiebert said.

‘My heart is broken’
Hawass, the antiquities chief, summed the nationwide situation this way in his blog:

“My heart is broken and my blood is boiling. I feel that everything I have done in the last nine years has been destroyed in one day, but all the inspectors, young archaeologists, and administrators, are calling me from sites and museums all over Egypt to tell me that they will give their life to protect our antiquities. Many young Egyptians are in the streets trying to stop the criminals. Due to the circumstances, this behaviour is not surprising; criminals and people without a conscience will rob their own country. If the lights went off in New York City, or London, even if only for an hour, criminal behaviour will occur. I am very proud that Egyptians want to stop these criminals to protect Egypt and its heritage.”

Something more to ponder if you go to see the Science Museum’s King Tut exhibit. It is scheduled to be in town until Sept. 5.

Despite museum lootings in Egypt, Tut exhibit coming to St. Paul is safe