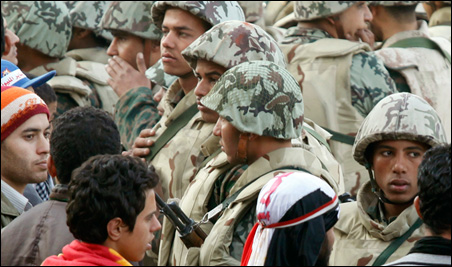 By kicking aside its president, dissolving its parliament and suspending its constitution, Egypt has wiped clean the slate of its government.

Maybe. There is a different slate in this potentially pivotal Arab nation — written largely in invisible chalk. Experts know just enough to read in it a cautionary tale.

The military authorities who have taken control of Egypt have operated largely in secret to build their own empire of money and power.

“You have this huge beast of a thing in all sectors of Egypt’s economic activity,” said Robert Springborg, a Minnesota native whose extensive experience in the Middle East includes working as director of the American Research Center in Egypt. Currently he is a professor in the Department of National Security Affairs at the Naval Postgraduate School in Monterey, Calif.

And Egypt is taking a long-shot gamble by trusting that commanders of such immense power and wealth eventually will relinquish meaningful control to civilians, say Springborg and other experts.

Even the Egyptian people do not know the full extent of the economic and political force their military leaders have amassed. No one does outside elite circles in Egypt because that force has been assembled over decades behind the veils of political expediency and national security.

Origins of a secret empire
The origins of this secret military economy go back before Egypt’s now-deposed President Hosni Mubarak began his authoritarian rule some 30 years ago.

After World War II, Egypt asserted itself in the global expansion of military-industrial enterprise. It became the leading Arab manufacturer of aircraft and weapons. It set up a series of state-owned enterprises under the control of an Armament Authority commanded by a major general, according to Global Security.org.

Because Egypt considered the value of its military exports confidential, it omitted this information from its published trade statistics. It outlawed news coverage of the military enterprises. And it defied efforts by global financial institutions like the World Bank to lift the curtain of secrecy and bring the military-run factories into the private sector where they would be more visible and accountable.

You have to go back to the 1980s to find estimates on the exports from this hidden industry. And those estimates range from $70 million a year in 1980s dollars to $1 billion.

From grenades to bread
But the industry didn’t stop by any means with exports of armored personnel carriers, grenades and tanks.

“Twenty-six of these plants produce both military and civilian goods,” Global Security says.

Paul Sullivan, a National Defense University professor who has spent years in Egypt, told Time magazine that the Egyptian military’s business empire probably accounts for 10 percent to 15 percent of the country’s $210 billion economy.

The essence of Egypt’s struggle
Such are the personal economic stakes for the people now trusted with delivering democracy to Egypt.

“They have got billions and billions at stake here, so they are not going to let this go lightly,” Springborg said. “Any civilian who is a threat to this … had better make sure he has got a bullet-proof vest.”

This is the essence of Egypt’s upcoming struggle.

“If civilians don’t get control of the military — which in turn controls the economy, national security and basic access into the political elite — if all of that or even some part of it is allowed to continue, then of course you can’t have democracy,” Springborg said.

Keeping the officers satisfied
How did Egypt come to cede this generous slice of the economy to the military? Over the years, that arrangement has served Egypt’s authoritarian government on several levels.

After Egypt’s conflict with Israel was settled in a peace agreement, the military-run enterprises provided jobs the government needed to downsize its army without destabilizing the regime.

Further, the Egyptian government could get by paying a pittance to young officers and still buying their loyalty with the promise of early retirement followed by a lucrative career in a military-run industry.

“Defense Minister Tantawi keeps the Armed Forces appearing reasonably sharp and the officers satisfied with their perks and privileges,” U.S. Ambassador Margaret Scoby wrote in a secret diplomatic cable released by Wikileaks through the Guardian newspaper.

Soccer teams and swimming pools
Another puzzling question is how the military managed to win and maintain the trust of the Egyptian people — even through the crucial time of the pivotal protests.

Separate forces commanded by the Ministry of Interior took charge of the hated police functions — the ubiquitous monitoring of people’s comings and goings, the disappearances of dissidents and the brutal crackdowns on public opposition.

“This enabled the military to have its cake and eat it too,” Springborg said. “They didn’t get their hands dirty with beating people up and torturing them.”

Yet the military officials benefited enormously. Thanks to the interior police, no one could dare to publicly question them.

Meanwhile, the military moved to shore up its popularity. It built stadiums and sponsored the soccer teams that played in them. It built community swimming pools and museums. It organized youth clubs.

Its public face was represented by millions of young conscripts who proudly served their country.

Ousting the competition
While the eyes of the world were focused on the protests in Tahrir Square, the top military officers took steps that can be interpreted in diametrically different ways: Either they were guarding their own economic interests or else they were serving the will of the protestors by purging the government of people who had been associated with the hated regime.

Amid the chaos of the protests, the military pushed out the former president’s son, Gamal Mubarak, who had proposed to take some industries public and shift economic power to his business associates.

They clamped down on Gamal Mubarak’s associates and on other civilians who posed a threat to the military’s business interests.

Now, many of those presumed competitors “are under investigation and barred from traveling overseas, their bank accounts frozen,” said the Time article.

“Many are believed to be supporters — and major beneficiaries — of the privatizations that were part of Gamal’s aggressive economic liberalization policies,” Time said.

Eventually the same generals pushed the president out the door too.

“They always were in charge,” Springborg said. “From their perspective things could work out well. They got rid of the dead weight of Mubarak, who was an increasing problem for them. They got rid of Gamal. They pulled the rug out from under the private sector.”

Now, the suspense and Egypt’s future turn on the question of whether the military will yield real power to civilians or instead evade reform that could threaten its economic prowess.

Sharon Schmickle covers economics, international affairs and other topics. She can be reached at sschmickle [at] Minnpost [dot] com.