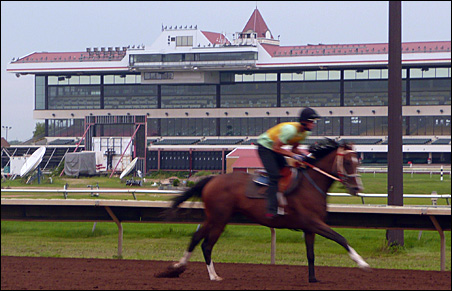 MinnPost photo by Jay Weiner
A racino at Canterbury Park is only one of many gambling expansion proposals.

Put your money on this: Once Gov. Mark Dayton releases his state budget Tuesday, every program and every cause will begin looking under every rock for more revenue.

To some, “revenue” equals taxes.

But there is a big, hairy, divisive, more voluntary ATM machine lurking in the marble hallways where lawmakers and lobbyists will roam from now to May desperately seeking dollars: state-sponsored gambling.

Slot machines at racetracks, electronic bingo at bars and restaurants, and even a proposal for a casino at the Minneapolis-St. Paul International Airport are all about to take center stage.

Even if the Republicans who control both the House and Senate aren’t interested in new revenues, they do see a $6.2 billion deficit.

Issue wrapped in controversies and questions
Gambling is one means of addressing that problem. It carries with it myriad controversies and questions about just how much it can generate. With gambling proposals come all the questions of social costs, relations with casino-operating Indian tribes, and just who benefits if slots move into racetracks and high-tech pull tabs into the state’s 3,000 bars and restaurants.

For instance, the owners of Canterbury in Shakopee have seen the price of their stock rising dramatically since Election Day as investors speculate on the possible expansion of gambling at the 25-year-old track.

Already, bills for upgrading bar and restaurant charitable gaming have been introduced in the House and Senate.

A casino bill at the airport, sponsored by Rep. Phyllis Kahn, DFL-Minneapolis, has been introduced, too.

Legislation to place as many as 2,000 slot machines at Canterbury Park and Running Aces horse tracks will be introduced by the end of the month, advocates say. Lobbyists for both tracks are in negotiations to iron out details of their proposal. If unresolved, there could be two racino bills.

“My hope is that we can agree on the structure of the bill and work together on getting it passed,” said Canterbury Park’s Sampson, who has been working for more than a decade to get slots in his facility.

Racino proponents claim their locations could create instantaneous revenue for the state. They argue that a newly built state-backed casino would take years to begin operation.

“A racino could be up and running in four months,” said longtime racino advocate former Sen. Dick Day. “We wheel in a thousand [slot] machines. In four months, we start kicking money back to you.”

In either case — racinos or casinos — a large upfront licensing fee could be expected, too, to get the state some early revenue. Last year, in an attempt to get a racino passed, Canterbury offered to pay a $100 million up-front rights fee to host the casino.

A grass-roots public relations campaign has been launched by the charitable gaming people and bars and restaurant coalition, and an advertising and web effort is already under way from the Running Aces track.

Racino Now, led by Day, a former Senate minority leader, has been working for years to get a racino bill in place and was active in identifying racino supporters during the November election. It is linked to Canterbury Park in Shakopee.

The anti-gambling forces are out to stop any new gaming venues. Citizens Against Gambling Expansion has launched its own social media campaign. CAGE is a strange-bedfellows coalition, with the likes of DFLers Wendell Anderson and former Sen. Ember Reichgott Junge as its honorary chairpeople, along with Republican stalwarts Annette Meeks and Tony Sutton on its board of directors. It links gambling to various social ills.

Lobbyists, and lots of them
Then there are the lobbyists. A MinnPost count has 39 separate lobbyists working for various Indian tribes or groupings of tribes opposed to gaming efforts that would compete with tribal casinos. Northern tribes fear that Running Aces, in the northern suburb of Columbus and on I-35, will capture gamblers who otherwise would be heading to Hinckley or Duluth to play.

And, of course, the Shakopee Mdewakanton Sioux Community, which operates the sprawling Mystic Lake complex, doesn’t want competition four miles away at Canterbury Park in Shakopee.

Canterbury/RacinoNow has 10 lobbyists listed. Running Aces has another two, for a total of a dozen backing some sort of racino plan.

Public affairs agencies, which need not register as lobbyists, are on retainer to ratchet up the traditional and social media megaphones. Profit Minnesota, the consortium of restaurant, bar and lodging organizations, has the up-and-coming Minneapolis public affairs shop Strategic Field Concepts leading its campaign.

Among Strategic Field’s other clients: the National Football League Players Association, which is positioning itself in the event of an owners’ lockout next month.

How much cash?
Exactly how much money each of these possibilities can bring in must be examined, of course. Estimates on gambling dollars tend to be exaggerated. Indeed, both Canterbury and Running Aces have had financial troubles over the years.

Still, racino advocates have long used an estimate by the Minnesota Lottery that racino revenues could bring in about $125 million annually to state coffers. The Running Aces group asserts more vaguely on its website that slots could mean “$400 million in economic activity.” Racino backers point to aiding the state’s horse industry by subsidizing the racing operations with the slot machine revenues. Racino expansion would, presumably, mean more jobs on the racetrack sites.

The bar and restaurant owners say the addition of new-wave electronic bingo, pull tabs and handheld mini-slot-like machines could mean about $800 million annually to the state and charitable organizations statewide, with $600 million going to the state and $200 million to charities. They use stats from state agencies, too.

But these numbers have been questioned by Indian gaming lobbyists and legislative researchers.

To be sure, charitable gambling has seen dramatic decreases in recent years from several causes: younger people shying away from old-fashioned paper pull tabs, the state smoking ban cutting business in small bars and the economy suffering.

Profit Minnesota is promoting its statewide nature and asserting that adding electronic versions of in-bar and in-restaurant gaming would add jobs in small businesses in all 87 counties. Unlike racino efforts, it would not be simply a metro area program.

Profit Minnesota’s fundamental sound bite from its website: “We can’t simply raise taxes or cut services from the budget to solve this problem. Our state is hurting, our charities are broke, our small businesses are failing and our jobs are disappearing.”

Running Aces and Canterbury reps have been meeting for weeks to debate the specifics of any racino deal.

Canterbury backers believe the Lottery should oversee the racino because that would send money to the State’s Environmental Trust Fund. Running Aces would like to see a special fund established so racino money goes directly into the general fund. Its operators want the State Racing Commission to regulate the slots.

The two tracks also have different opinions about how horse owners and trainers would share the proceeds from the expected increase in revenues.

As for Dayton, he has expressed his openness to gambling receipts. During the election campaign last year, he floated the idea of a casino at the Mall of America, an idea generally opposed by city officials in Bloomington.

Earlier this month, he told reporters he’s open to a racino plan but warned the money would have to flow to some fundamental public benefit, such as education.

That comment got the Racino Now folks excited; Day instantly sent out an email to thousands of followers encouraging them to contact the governor’s office to thank him for being “willing to have an open discussion regarding the subject.”

Of course, backers of a Vikings stadium — such as Day — have said racino money would be a “no brainer” to fund a new facility. But that direct connection to a sports stadium seems to be waning at the Capitol as other, more-pressing needs would intercept any “newfound” revenue.

“Our position is that the Legislature can spend the money the way they want to,” said John Derus, a former Hennepin County commissioner and now a spokesman for the Running Aces racino effort. He understands that lawmakers would likely rather use gambling proceeds for roads, bridges and K-12 education. “Us telling them what to do with their tax money is not a good idea.”

Simoneau’s letter refers, too, to the unreliable nature of lottery revenues. He states that a “back-up” tax — generally meaning supported by the state General Fund — would have to be put in place as a safety net to any stadium proposal with gaming funding.

Still, the Vikings have pointed to the Lottery as one way to fund their $800 million to $1 billion stadium project. Recently, the team reported that a special Vikings scratch-off game generated $12 million in sales. Expect a component of any Vikings finance plan to include Lottery proceeds.

“There are various groups that are trying to influence the Legislature to change its gambling policy,” said Canterbury’s Sampson. “We should all work positively on our proposals.”

Said former Sen. Day: “I kind of like the idea they’re all coming forward. I like the idea the governor is not opposed to it. Maybe there will be some combinations of them all, and they all might be put together. Let them all be heard.”

With the scramble for new revenue, will Minnesota expand gambling this time around? All bets are on