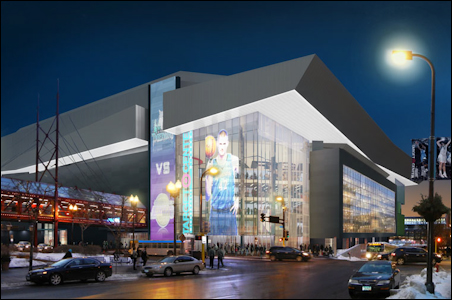 Courtesy of Ellerbe Beckett
Target Center would get a makeover inside and out under a plan unveiled today.

Minneapolis’ aging Target Center is about to seek an eye-popping $155 million renovation.

With this effort to extend its useful life, the 20-year-old arena will move into the bull’s-eye of Minnesota’s enduring stadium and arena debate.

Also bound to hit center stage: the notion of a possible “global solution” for all of the state’s major sports facilities.

Whether there is a political appetite and a common public funding revenue source to help fund a new Vikings stadium, costing at least $800 million, to lift some debt on St. Paul’s Xcel Energy Center (perhaps $40 million to $65 million worth) and the new proposed $155 million Target Center plan remains to be seen.

But the NBA Timberwolves, the city of Minneapolis, which owns the arena, and AEG, the entertainment conglomerate that manages the building, are announcing a plan for the renovation at a 1 p.m. news conference today.

We will have design specifics for you as they become available.

Target financing plan not set
But, according to a reliable source, a finance plan for the redo of the arena, which is among the oldest in use in the NBA, has not been developed.

City and team officials have said that the arena has generated more than $100 million in tax revenues into the state coffers over its lifetime. The city bailed out the arena in 1995 when it issued $72 million in public bonds. The state has provided $750,000 a year to help with debt even as the arena kicks back more in taxes annually to the state general fund.

The city continues to underwrite operating losses of about $1.5 million a year. Here’s a 2009 city breakdown on Target Center financing.

Thus, as we discussed recently, the larger effort to build a new Vikings stadium that has been expected at the Legislature, looks as if it will be accompanied by a collection of sports facilities matters.

We’re told that many of the envisioned improvements at Target Center will aid the building in its ability to play host to non-Timberwolves events, such as concerts and family shows. They will also reposition the entry points of the blocky, ugly building so that it more naturally relates to its new neighbor Target Field, the new Twins ballpark. Concourses would be widened, too. Concession stands would get upgrades, and the connected skyway to parking ramps would be improved.

For the Wolves, who are the main tenants, but whose 40-plus games per year only make up about 25 percent of the building’s use, there are plans for new “clubs” within the arena; these are modern sports facilities amenities that didn’t exist when Target Center was first built for $104 million in the late 1980s by Minneapolis entrepreneurs Marv Wolfenson and Harvey Ratner.

There will be a further reduction of the number of luxury suites, too, and a bow to the changing market for premier seating, away from isolated sports condos within an arena and to more social, bar-like environs.

Renovation pitch: Cheaper than new arena
But, more importantly, city and team officials are expected to make the pitch that a new arena — perish the thought! — could cost upward of $500 million, far more than any renovation costs.

Apparently, Wolves own Glen Taylor is prepared to finance some of the renovations; how much we don’t know yet.

He told the Star Tribune Monday night: “If we could have our wish list, we do what a lot of other communities have done, and that would be have a new facility. But I served in the Legislature. I know the difficulties that the government is facing, so we have never asked for a new facility. What we want is to bring this up to date for our fans. … We want our fans to have the same experience that they would have at Target Field, the Xcel Center or the new football field at the University of Minnesota [TCF Bank Stadium].”

Like the Metrodome, which is 30 years old, Target Center is an aging, tired arena in a sports facilities landscape that is always changing because of the bizarre economics of sports: public subsidies, massive TV revenues, increased franchise values and gigantic player salaries.

In the cities that expanded in the NBA with Minneapolis in 1988 — Charlotte, Orlando and Miami — new arenas have already been built. The new Amway Center in Orlando cost a reported $380 million last year, plus $100 million in land costs.

We first previewed AEG’s vision for a renovation more than two years ago and more specifics of the Timberwolves’ hopes this last spring.

Target Center operators have been talking about fixing up the place for more than a decade.

This new and boffo Target Center renovation plan comes as officials crosstown at St. Paul’s Xcel Energy Center have been seeking to become “part of the conversation,” if and when a Vikings stadium bill is introduced. That football stadium bill is expected soon. The NHL Wild pay a whopping amount of the debt on the state- and city-funded arena, which opened in 2000.

Arena competition hurts both
This competition between the two arenas — barely 12 miles apart — has been at the heart of both facilities’ woes. Competition for concerts and family shows has led to super deals for artists and promoters, but operating losses for the buildings. The city of Minneapolis has long been underwriting those losses.

AEG, a mega-entertainment company, manages the building and is attempting to stop the bleeding. AEG is led by Tim Lieweke (PDF).

In the late 1980s, a high-energy whippersnapper, Lieweke was the fellow who helped Wolfenson and Ratner build and market their brand new Target Center.

Ironically, Monday night, AEG, which is based in Los Angeles, announced a massive naming-rights deal at a new as-yet-unbuilt NFL stadium, which is bound to lure an existing NFL team to Southern California.

The Vikings have often been mentioned as a candidate franchise for relocation, although there’s no indication that such a move is in the works. Still, fear of a Vikings’ departure, concern that Target Center will become obsolete and efforts to take some debt load off of the Wild in St. Paul are all soon to get shaken together like a nasty cocktail.

Add the swirling proposals for gambling expansion at the state’s horse racing facilities or in bars or at the airport,  add Dayton’s bonding piece for a new St. Paul Saints stadium, ponder the politics of seeking votes from the Minneapolis and St. Paul delegations … and that “global solution” will be kicked around in the months to come.

But is there the appetite?

Stadiums and arenas: Is ‘global solution’ the answer for Vikes, Wolves, Wild?