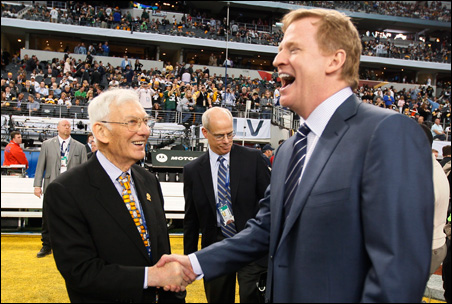 Now that the Super Bowl is over, NFL talk will turn to the ongoing labor negotiations between the owners and players and, of course, to the health of some franchises, including the Vikings.

The collective bargaining agreement is set to expire in a month. The Vikings’ lease at the damaged Metrodome will expire after the 2011 season. Soon.

While there’s likely no truly “troubled” NFL franchise — don’t cry too much for anyone whose team’s value rises regularly and whose industry is a monopoly — the Vikings, San Diego Chargers, Buffalo Bills and Jacksonville Jaguars are regularly mentioned as potentially mobile properties.

Each franchise and its city have stadium issues.

Commissioner on record for keeping team here
It’s all about the possibility that a team could move to Los Angeles. Or at least use L.A. as a threat. Surely, L.A. movers and shakers are cranking up the heat, even as NFL Commissioner Roger Goodell insists he wants teams to stay where they are.

He said so much when he visited the Twin Cities in December after the Dome collapse.

The man in charge doesn’t want the Vikings to move. Goodell hasn’t even hinted that’s on his agenda.

Still, we saw that the Star Tribune’s venerable Sid Hartman was banging the drums Sunday.

And other boosters will start banging soon, too, as various Vikings stadium proposals make their way to the Legislature.

We are not naïve. If Vikings owners Zygi and Mark Wilf and the NFL moguls don’t see a serious stadium deal forming in a reasonable period of time here — a couple of years — there is a possibility the team could be put on wheels. Without a new stadium, it’s bound to happen someday.

As with all of these situations, it’s up to the rest of us to figure out what — or if — it’s worth to keep them here, or to realize there isn’t a public interest — or rationale public funding plan — to keep the team here.

But, no matter what the sky-is-falling-types might say, an NFL team up-and-moving isn’t as easy as you getting in your car and driving to Des Moines. There are rules and procedures, and we thought now might be a good time to review them, what with threatening drumbeats sure to intensify.

Detailed NFL policy
We’ve attached here two important documents: the NFL’s “Policy and Procedures for Proposed Franchise Relocations” (PDF) and the agreement that laid the foundation for the policy; that’s a 1996 “Statement of Principles” (PDF) between the U.S. Conference of Mayors and the NFL.

You can read both for yourself, but there are some firm declarations and important hoops any NFL owner must jump through before moving a team. And the league has an important role here, too, which is good for any community. The league does seek stability, even if individual owners might not.

“League traditions disfavor relocations if a club has been well-supported and financially successful and is expected to remain so,” NFL policy reads. “Relocation … may be available, however, if a club’s viability in its home territory is threatened by circumstances that cannot be remedied by diligent efforts of the club working, as appropriate, in conjunction with the League Office, or if compelling League interests warrant a franchise relocation.”

OK, so a team could move.

But, it goes on: “Because League policy favors stable team-community relations, clubs are obligated to work diligently and in good faith to obtain and to maintain suitable stadium facilities in their home territories, and to operate in a manner that maximizes fan support in their current home community. A club may not, however, grant exclusive negotiating rights to a community or potential stadium landlord other than one in its current home territory.”

So, the Wilfs can’t guarantee Los Angeles officials that the Vikings will definitely head there.

Here’s where the fancy footwork comes in:

“If, having diligently engaged in good faith efforts, a club concludes that it cannot obtain a satisfactory resolution of its stadium needs, it may inform the League Office and the stadium landlord or other relevant public authorities that it has reached a stalemate in those negotiations,” the rules read.

We aren’t there yet.

Detailed requirements
But here’s what is required next:

The team must give written notice to the commissioner that it wants to move, and publish the notice in local newspapers.

“The notice must be filed no later than February 15 of the year in which the move is scheduled to occur,” it reads, so, theoretically, we have an entire year to deal with this Vikings stadium problem.

They are not going to move this year … unless their Metrodome lease is somehow voided by the downed roof. (We will know the status of roof repairing this week. Just how quickly the Metropolitan Sports Facilities Commission can fix the roof could cause another major kerfuffle with the Wilfs and the league.)

Back to the relocation rules … After notice is given, “Interested parties will have an opportunity to provide oral and/or written comments regarding the proposed transfer, including at a public hearing conducted by the League in the community from which the team seeks to relocate.

Key factors: “The adequacy of the stadium in which the club played its home games in the previous season; the willingness of the stadium authority or the community to remedy any deficiencies in or to replace such facility, including whether there are legislative or referenda proposals pending to address these issues; and the characteristics of the stadium in the proposed new community” — that is, in the current case, Los Angeles, where there is no stadium under construction yet.

One other hurdle for the Wilfs: Any owner who attempts to move his franchise from a middle-sized market like the Twin Cities to Los Angeles will be required to pay a substantial — many hundreds of millions of dollars — transfer fee to the other NFL owners for taking that lucrative Southern California market.

So, it’s not gonna be easy to quietly drag the Vikings to L.A. It’s doable, but filled with various checkpoints along the way. Even sports team owners have to follow the rules of the game.