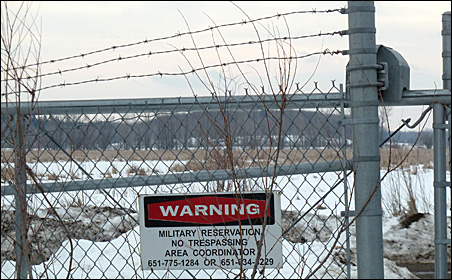 MinnPost photo by Jay Weiner
Here’s the latest site under consideration in the Vikings stadium sweepstakes.

A curtain rose as the overture faded, and the 2011 revival of an oft-performed Minnesota drama got under way today.

It was complete with eager media types and their microphones and klieg lights, with an angry citizen screaming to be heard, with an obstinate elected official who cast a singular “No” vote, and with other Ramsey County Board members — who often act in front of empty seats — enunciating clearly a certain cautious optimism as they embraced a statewide cultural dilemma.

In the hallways, city council members from a small suburban community huddled to figure out their next step as other government officials discussed the costs of environmental assessments. It was C-SPAN meets HBO, with a little bit of reality TV and ESPN thrown in.

Really, it was the return of a Minnesota cliché, a team seeking a new stadium and shopping for that elusive “local partner” to do so.

We have been here before. A lot. But in this latest edition, the NFL Vikings are running out of time to find a willing governmental unit to help them build and fund an $800 million to $1 billion stadium somewhere, anywhere . . . even Arden Hills, in the northern reaches of Ramsey County.

You know where that is, right?

The seven members of the County Board sat in their brown leather, high-backed swivel chairs around the horseshoe-shaped table of wood from Burma. Beyond them was a backdrop of golden pillars and oak walls adorned with floor to ceiling colorful murals evoking St. Paul’s pioneer and riverfront heritage.

Cut to that Burmese table, around which seven elected officials were discussing a resolution (PDF) to begin examining the “potential acquisition and remediation of land and making public infrastructure improvements to allow for a stadium project” on the former site of the Twin Cities Army Ammunition Plant, about 2,400 acres of undeveloped and polluted land long pondered by various developers, but still just sitting there, east of I-35, between Hwy. 96 and County Road I.

There was the standard fare — some myth, some reality — in the script. 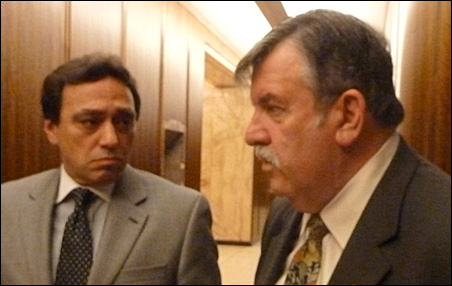 A stadium is good for economic development and jobs. All sorts of companies in the state get subsidies, so let’s not be foolish and rail against subsidies to sports team. It’s a chance to expedite cleanup of a piece of land that’s long needed mitigation.

“It’s become an eyesore,” said Commissioner Tony Bennett, the board’s biggest stadium advocate, a burly fellow with a mustache and former state legislator who seems to have come out of central casting.

Oh, and then there was the theme that needs to run through all facilities battles: the East Side of the metro area needs roads and never seems to get the Legislature’s ear. That Minneapolis vs. St. Paul rivalry. That’s always good for rational regional decisions.

Around the table they went, all yes votes to authorize the county manager to put together a budget and hire consultants. Many of the yeses were qualified: “I’m for this phase, but let’s wait-and-see.”

Except for Commissioner Janice Rettman, who said she is a fan of Vikings running back Adrian Peterson and defensive end Jared Allen and who even produced a team jersey to show her affections. But she went on to bemoan the lack of property taxes from stadiums, and she pointed to the NHL Wild and their desire to get debt relief now on the 10-year-old Xcel Energy Center, funded with some state grants and loans and city financing.

“Is this the way we want to spend our precious few resources?” Rettman asked, in the face of other countywide budget cuts.

Before Rettman could become the only “No” vote, before any board member could vote at all, a man in a long-sleeved brown shirt and a plaid vest jumped up from the gallery and approached the commissioners.

“Madam chair, are you not going to have some input from the public today? Is this a closed meeting?” the man yelled. “This is outrageous.”

So, a voice from the people was heard. Tension was introduced to the drama. The script was interrupted, but, as if he weren’t there, the vote continued, 6-1, the commissioners making official their dating status with the Vikings, with a marriage many months down the road.

No new taxes
Scene Two. Cut to the hallway.

The angry citizen, Greg Copeland, took his case outside the chambers. The chairman of the St. Paul Republican City Committee — talk about a person in need of friends! — Copeland said that if the county board had any plans to impose a tax on Ramsey County citizens, he would lead an effort for a referendum to stop such taxation. No stadium tax, he said, not in the face of unemployment and foreclosures. He helped lead the defeat of a Twins ballpark referendum in 1999. 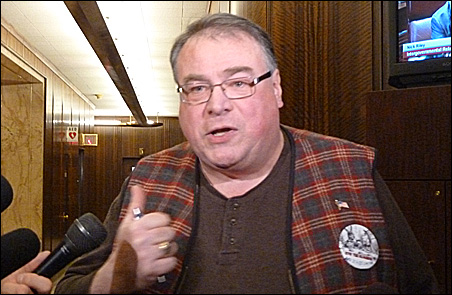 MinnPost photo by Jay Weiner
Citizen activist Greg Copeland is threatening to force a referendum if tax money goes to a Vikings stadium.

“We can do that again,” he pledged to the journalists.

In another nook of the hallway, members of the Arden Hills City Council said they will address the Vikings matter at their Feb. 28 meeting. Meanwhile, Bennett and Commissioner Rafael Ortega, the other booster of the stadium effort, allowed that any Vikings deal likely needs about $150 million in road and other infrastructure work, not to mention environmental work that could reach $15 million to $18 million. Ortega said a countywide sales tax is on the table; he’d rather take control of that than a potential metrowide sales tax that could be imposed by the Legislature.

A resident of Shoreview, Tom Lemke, who lives within a quarter-mile of the potential stadium site, said he supported the Vikings effort. And Greg Mack, Ramsey County director of Parks and Recreation, said a full environmental evaluation of the land on which the stadium would sit could take about a year to complete.

Feet away, Bennett repeated a phrase he’s been using a lot recently about carefully partnering with the Vikings: “If you’re not at the table, you can’t eat.”

Cut to a white landscape, 11 miles north and west of the courthouse. It’s a drive up 35E from downtown St. Paul, along Hwy 10 north and west, past the southern perimeter of the large site, then north on 35W and east on County Road I.

The piece of land is massive. Amid the acres and acres of snow, with old military buildings on it, it has a desolate feel, beyond the fences and the barbed wire.

There’s certainly enough land there for a stadium and tons of revenue-producing parking. But a “People’s Stadium” as Gov. Mark Dayton has called for?

For one, public transit is going to be a big problem. Road work will be necessary. Can this be as cost-efficient as building a new stadium on the Metrodome site? That will be a fact that could help — or destroy — this Arden Hills exploration. 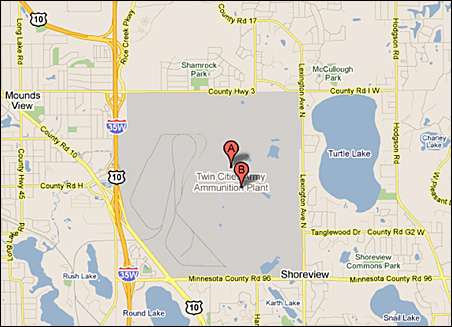 Will there be a roof on this stadium in the suburbs? Does a suburban site need one? If not, what of the call at the Legislature for its use by high school teams from Greater Minnesota or the University of Minnesota baseball and softball teams?

An NCAA men’s or women’s Final Four? Where are the hotels? Where are the bars and restaurants? (It is true the Dallas Cowboys’ new domed stadium, located between Fort Worth and Dallas, is slated to play host to a men’s Final Four in 2014, but Arlington, where the stadium is located, is also home to the Texas Rangers baseball stadium and Six Flags theme park, not to mention a score of hotels. Arlington has a population of 380,000.)

Frankly, at first glance, it’s an ideal site for a team owner who wants to build the whole thing by himself, an owner with creative development experience. Wait, could that be Zygi Wilf, he of the shopping centers and apartment buildings and Vikings ownership? New England Patriots’ owner Robert Kraft, a friend of Wilf’s, built Gillette Stadium, 25 miles from downtown Boston, pretty much with his own dough, with the help of the NFL and some infrastructure aid from the state of Massachusetts.

But a county-funded stadium for use a couple of dozen times a year, 10 to 12 miles from the downtown cores of competing cities, each of which already has an 18,000-seat arena and a convention center? Does that make policy sense?

Gazing over the wide expanse in northern Ramsey County, it seems as if somebody at a higher level needs to analyze the metropolitan impact of a 65,000-seat facility on this spot in this corner of the Twin Cities.

As Vikings stadium development guru Lester Bagley reiterated today: “There’s work to be done. There’s lots of conversations to be had … It’s a real opportunity. We’ve got to get quickly to it and get to the bottom of it and answer questions.” 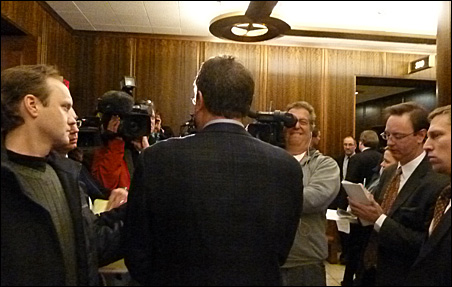 He firmly said it’s not about leverage to push Minneapolis leaders, as Rep. Alice Hausman and 10 other members of the St. Paul House delegation suggested in a letter (PDF) they sent to Ramsey County leaders Monday night. They opined that Ramsey County was being used like Anoka County was about six years ago. Bagley denied that.

How will this drama end?
This fall — if there is successful passage of a stadium bill at the Legislature in May– will Wilf and Commissioners Bennett and Ortega be standing with hardhats and shovels, shaking hands somewhere in the wilds of Arden Hills, smiling broadly?

That’s a scene, and a script, for another day.