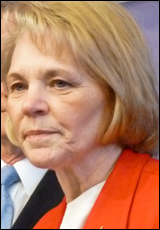 When the House Government Operations and Election Committee convenes once more Tuesday morning to tackle the controversial Voter ID issue, there will be another problematic matter on the agenda.

It’s called the “electronic roster” provision in House File 210, sponsored by Rep. Mary Kiffmeyer, the former Republican secretary of state, but it is also known as the electronic “pollbook.” by many election administration insiders.

In Kiffmeyer’s view, the roster provision is an “improvement” that is supposed to reduce alleged voter fraud in Minnesota and that’s supposed to “modernize” the election process and, ultimately, over time, reduce the cost of election administration.

Professor Max Hailperin, of Gustavus Adolphus College — who has examined the new technologies in voting nationwide and is working with CEIMN — wrote in the letter that the online election roster is “an unwise idea at a fundamental level.”

“We support the idea of making election administration easier and more efficient,” said CEIMN’s executive director, Mark Halvorson. “But we are troubled with and opposed to these [electronic roster] provisions.” He’s calling for a “blue ribbon panel” to vet the election pollbook issue because, as Hailperin said in an interview, “This introduces more ways for things to go wrong.”

Adding technology to Election Day requires a balancing act, Hailperin said: “The trick is to do it in a way that makes the costs and the risks proportionate to what can be achieved.”

Now, you walk into your polling place, you sign the poll book, or roster, you get a tiny paper receipt, you hand it to another election judge, who gives you your ballot, and you vote.

If you’re not registered, you show an ID and register on paper and can vote.

Under the Kiffmeyer proposal, precincts with 100 or more voters would be required to have high-speed Internet connections linking each precinct with the secretary of state’s State Voter Registration System database on Election Day. Presumably, more than 3,000 or so precincts would then be linked together in one giant network on Election Day.

The problem that Kiffmeyer and HF 210 supporters are seeking to solve is alleged voter fraud in Minnesota. But election officials statewide say voter fraud is not a problem; CEIMN surveyed county attorneys (PDF) on felon voting and found a total of 26 fraudulent voters and 12 who broke the law on registering in Minnesota during the 2008 election; all of them were felons who weren’t allowed to vote.

There is concern of double voting, too — that is, situations in which Joe Smith would vote in one precinct at 8 a.m. and then register anew in another precinct at 2 p.m. and vote again. Of course, doing such a thing is a felony. And there is no evidence of massive double voting in the state in 2008 or 2010.

The other concern: that the number of voters who come into a polling place doesn’t add up to the number of votes. Making those two numbers agree is a process called “reconciliation,” and it became an  issue raised by Republican gubernatorial candidate Tom Emmer during the 2010 recount  in an election eventually won by Mark Dayton.

The assertion: Sometimes there are more votes than voters.

But there is nary a problem with reconciliation now, said three county election officials we talked with today. Blue Earth County Elections Director Patty O’Connor said she had “less than a handful” of non-matches, and it was actually more voters than votes. That is, through jammed machines or other quirks, a vote here or there wasn’t tallied. But Kiffmeyer’s bill wouldn’t solve that.

Some state election managers and the CEIMN experts wonder about the feasibility and security of a totally connected election network on Election Day with thousands of precincts, even more thousands of volunteers, and millions of voters.

“If the network goes down, which we have no control over, we’re screwed,” said Mansky.

Plus, most polling places are in churches or schools with limited broadband access.

Said O’Connor, the chair of the election committee of the Minnesota Association of County Auditors, Treasurers and Financial Officrs: “In outstate Minnesota, connectivity is a huge concern. I have town halls with one outlet.”

Mansky and other election officials are aware of a disastrous introduction of electronic voting systems in Colorado in 2006 that failed, causing long lines, mostly because of improper technological preparation.

A group called VotersUnited.org has detailed problems across the nation.

Generally, Mansky supports electronic devices in precincts to reduce paper documents. Hennepin County Elections Manager Rachel Smith and O’Connor support electronic poll books for same-day registration purposes. The three generally favor a system that is limited to data loaded on precinct-based laptops or iPads. The voter lists for that precinct would be on those specific machines, with absentee voters from that precinct updated on those particular machines.

But if there were a statewide network with thousands of elections judges having access to the total voter registration system on Election Day, “The potential for a larger-scale fraud would actually grow,” said Hailperin.

Technology snafus occur, as Kiffmeyer embarrassingly learned last week when she attempted to show a video about her electronic plans.

Here’s that video that she is expected to try once more to show Tuesday.

It was produced by a group called Minnesota Majority, a group with ties to the Minnesota North Star Tea Party Patriots.

Then, there’s the cost: Election officials said a recent sale on equipment pegged the cost of each electronic poll book at more than $800 each. Depending on the precinct, there could be a need for two to six machines. Hennepin County has 425 precincts. Do the math. That would add up to $1 million for a system that might not improve much at a time when the state and counties are in financial stress.

Hennepin County’s Smith said she had done an analysis of savings from reduced paper versus the costs of implementing the technology: The payback might not come for five or six election cycles. “By then, I’m afraid it could be obsolete,” she said.

Under the Kiffmeyer bill, electronic rosters — and the advent of Voter IDs — would be effective for any election after June 2012.

But Tuesday morning at the House committee hearing, Mansky is going to suggest that the Legislature authorize a  task force to look at this issue in detail and come back in January 2013 with a proposal on how to implement electronic advancements.

With 2012 a presidential year and a redistricting year, Mansky said Kiffmeyer’s timeline is impractical.

“There is no way we can do this next year, not a chance,” Mansky said.

Voter ID is not the only troublesome issue in Kiffmeyer bill, election groups say