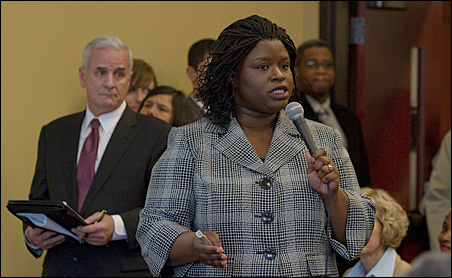 In the end, Gov. Mark Dayton wowed the crowd, not with his eloquence but, rather, with a simple promise: His staff and commissioners would respond to black leaders in nine days.

Don Samuels, a Minneapolis City Council member, said nothing the governor could have said would have been more powerful.

“Black folks are used to good sermons,” Samuels said. “He came, he stayed, he listened, he took notes. Then, he committed to a deadline. That was huge.”

In all respects, this economic summit in North Minneapolis late Wednesday afternoon was extraordinary, starting with the fact that Dayton was even there.

In simply showing up, Dayton became the first sitting Minnesota governor since Rudy Perpich to appear in that hugely depressed area of the city.

Dayton makes good on campaign promise
His presence was the result of a promise he’d made to Jerry McAfee, pastor at New Salem Baptist Church, even before Dayton had won DFL endorsement.

“We had a meeting at my church,” recalled McAfee. “He asked me before he left that meeting what he should do if he did win. I said, ‘Hold an economic summit.’ He said, ‘OK.’ ”

Dayton did win. But McAfee expected to hear nothing back. Over the years, any number of campaigning pols have expressed interest in North Minneapolis. After winning elections, they tend to disappear.

“But he [Dayton] ran into [Rep.] Bobby Joe Champion,” McAfee said. “He told Bobby Joe he’d promised to hold the summit and he wanted to make sure it got done.”

The meeting site, a room at a University of Minnesota research facility on Plymouth Avenue, was jammed with people, mostly black. There was seating for 200 but nearly twice as many people in attendance.

At the start of the program, Champion reminded the crowd that this meeting was about “business,” not the myriad other issues faced by those in the community.

A half-dozen presenters laid out the economic issues facing black Minnesotans as the governor and six of his commissioners listened.

The presentations were not pretty.

Nekima Levy-Pounds, a St. Thomas law professor, spoke of how she had moved to Minnesota in 2003 with high expectations.

“I heard it was a great place to live,” she said. “A land of equal opportunity. But I’ve found there are two Minnesotas — one white, one black. Separate but unequal.”

Statistics present bleak picture
She laid out the dismal stats.

These disparities place Minnesota at the top of virtually every negative list in the nation.

“We have a problem,” she said in dramatic understatement.

Those numbers were the backdrop for the two hours of presentations and questions that followed.

Former Judge Pam Alexander, who now heads the Council on Crime and Justice, spoke of the “legislative barriers” that prevent ex-offenders from finding jobs and housing.

Instead of being a state of ‘perpetual punishment,” she said, Minnesota needs to come up with a series of tax credits for businesses that hire ex-offenders. She also recommended the state do more job training for offenders and create other policies that would allow offenders who have served their sentences to re-enter society.

There were murmurs of approval.

Black business leaders pushed the governor to help them gain access to capital.

Even such mighty businesses as TLC Precision Wafer Technology, which produces “next-generation micro-chips” and sells them worldwide, has trouble gaining access to capital, according to the company’s founder, Tim Childs.

Childs spoke of how a friend urged him to move his business to Michigan or Louisiana, because those states are much more open to black-owned business than Minnesota.

“I want to stay here,” he said as the crowd cheered. 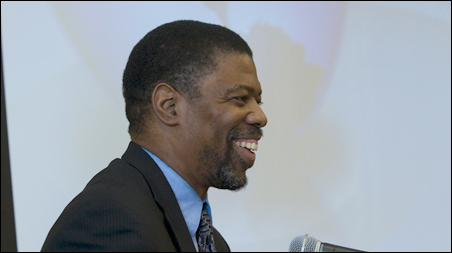 He said he has some manufacturing done in Taiwan.

“But we could do that in North Minneapolis,” he said. “I don’t like to send money across the sea.”

Without a “more cooperative” state government, he has little choice, he said.

Others spoke of the need for such state operations as the Department of Transportation to “unbundle” large contracts to give small businesses an opportunity to compete.

Audience skepticism evident
The lists of proposed solutions were long. The skepticism that Dayton would do anything ran deep.

Through it all, Dayton stood at the front of the room taking notes. Listening.

Then, it was the turn of those in the audience to make their appeals to the governor.

“Where,” asked one woman, “will all the politicians be tomorrow?”

Another woman asked, “Whose job is it to correct these problems? Who’s accountable.”

Former City Council Member Natalie Lee Johnson was assigned the task of summing up the presentations and comments.

She turned her summation into an attack and a challenge.

The governor should be accountable, she said. She turned to Dayton’s commissioners.

“Some of you were taking notes,” she said. “I hope the rest of you heard what was being said. You’re accountable, too.”

There were more murmurs of approval.

Then, finally, after two hours, it was Dayton’s turn to speak.

He thanked people for coming, thanked them for the patience they’d shown and then he made his promise.

He assigned Micah Hines, an assistant chief of staff, to work with his commissioners.

“We’ll respond in writing by a week from Friday — that’s nine days from now,” he said.

Those responses, he promised, will be specific about what state government can do NOW to act on issues raised during the summit.

That’s all he said.

But it was stunning to the audience — and, presumably, the commissioners as well.

A promise and a quick deadline
A response — in nine days.

Louis King, who heads Summit Academy in North Minneapolis, was impressed. This was the message the audience needed to hear. A promise of action and a tight deadline.

“We can’t afford another series of meetings,” said King. “We’ve been analyzed to death.”

Samuels, standing outside the meeting hall, kept thinking about what he’d just heard.

“We [the people assembled] have become very cynical,” he said. “I think most of us were ready to go home and just throw up our hands. We’ve heard it all before. But he gave us a commitment.”

At first, the crowd responded with silence. What had they just heard?

Then, there was applause. And long after making his promise, Dayton stayed and shook hands.