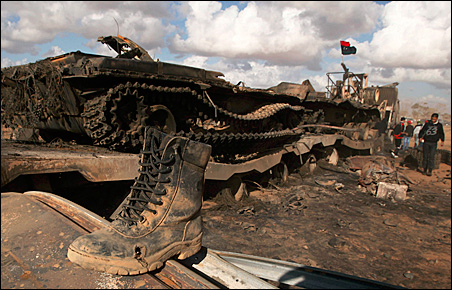 REUTERS/Suhaib Salem
A destroyed tank sits along a road between Benghazi and Ajdabiyah after an air strike by coalition forces.

The televised sight of U.S. missiles streaking toward targets in Libya took me back to March, 2003.

At that time, I was camped near the Iraqi border as a reporter embedded with a U.S. Marine battalion. We’d spent the better part of the day sweltering in desert trenches while Saddam Hussein hurled missiles toward the U.S. forces that were poised to invade his country. U.S. Patriot Missiles responded, lighting the night sky with the opening salvos of a war that was to take twists and turns few Americans could have foreseen.

I can’t be alone in wondering what twists and turns we will encounter in Libya now that we have joined European forces in a campaign of military strikes against targets there.

I also can’t help but make then-now comparisons with the launch of the Iraq War.

Clear differences
Invasion is the key word. There is no indication the United States or its allies intend to send ground forces into Libya. Washington hadn’t been a bit secretive or even subtle about its plans to invade Iraq. Anyone with open eyes could see the buildup of U.S. troops and war machinery in Kuwait for months in advance of the invasion.

Another key difference is what’s called the “Arab Spring.” The current strikes on the military capabilities of Libyan strongman Muammar Gadhafi come amidst a remarkable grassroots call for change across the Arab world.

Iraqis had resisted Saddam over the years — the Kurds in the north and the Shiite in the south. But there was nothing as immediate and sweeping as the current Arab drive for freedom. That lends moral authority to the military action against the installations Gadhafi has used to punish his own people.

Still, some of the questions rising now are similar to those we debated so intensely in 2003.

The true goal?
President Obama stressed on Monday that the military goals are to establish a no-fly zone over Libya and protect civilians against massacre by forces loyal to Gadhafi.

At the same time, Obama also renewed his call for Gadhafi’s ouster.

The difference between the military objective and the broader goal may be clear in Obama’s mind. But it does open a credibility gap somewhat like the sequence of goals in 2003 when the main objective at first was to rid Iraq of weapons of mass destruction but that later morphed into regime change.

“Obviously there is some confusion about the motives and the ultimate goals here,” said Tom Hanson, a former U.S. foreign service officer who currently is serving as a diplomat in residence at the University of Minnesota Duluth’s Alworth Institute and also working with the Oslo Center for Peace and Human Rights. 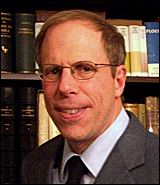 Hanson’s take on the situation is that Obama was unwilling to unilaterally unleash any military force against Libya. He insisted on clear support from the United Nations and the Arab League. And now he has to live with the terms of that support, whether or not they match his own goal.

In that regard, Hanson said, Obama is acting more like former President George H. W. Bush as he approached the Gulf War than like the second President Bush — George W. — as he attacked Iraq.

Many people, including the first President Bush, may have wished to see Saddam toppled in 1991. But that was not the goal spelled out in a U.N. Security Council resolution authorizing military action.

And the United States honored the limits of that U.N. resolution.

Now the United States and its allies are operating under similar conditions. The U.N. has not authorized forced regime change in Libya.

Still, Libyan opposition forces and some Congress members seem to think that’s the goal of the military strikes.

Others fault the action because there seems to be no clear-cut goal, no definition of success.

More than missiles?
Even within the terms of this current U.N. resolution regarding Libya, there is disagreement about the full course of actions the United States might take.

Obama has made vague references to deploying his country’s “unique” capabilities. Does that mean something more than missiles — maybe Special Forces or CIA operatives on the ground in Libya?

“If I were the president, I’d want as many sources of good information as possible,” said Afsheen John Radsan, a professor at William Mitchell College of Law in St. Paul and a former assistant general counsel for the CIA. 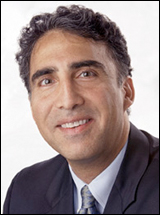 “So, yes, I’d be looking for the CIA to help me in Libya,” Radsan said in an e-mail response to my questions. “I might even consider giving the CIA an operational role — if I could keep it secret and keep them out of harm’s way.”

But Hanson said: “I’ve got to believe he is talking about fire power from the air. I just don’t see boots on the ground…. That’s where the Arab League would strongly protest.”

Indeed. Many critics of the Iraq War argued that any American presence on Arab land — overt and/or covert — would backfire because it so offended Arab sensibilities.

How deep is the support?
In 2003, the Pentagon’s civilian leadership — beginning with Donald Rumsfeld who was defense secretary at the time — was gung ho for action in Iraq while the State Department argued for caution.

This time, Defense Secretary Robert Gates sounded the voice of caution, clearly loath to commit U.S. forces and American taxpayers’ dollars to more overseas military action. In a turnabout of roles, the push for U.S. action came from the State Department and certain offices in the White House.

While France also argued for military strikes, other countries and key players have been more ambivalent.

The Arab League initially endorsed enforcement of a no-fly zone over Libya to protect civilians from air attacks. On Sunday, after the missiles were flying, the League’s secretary general, Arm Moussa, said the allies had gone too far. Then on Monday, he reaffirmed the League’s commitment to the U.N. resolution, the Financial Times reported.

Russia and China could have blocked the Security Council’s authorization. But they joined Germany, India and Brazil in abstaining from voting, thus tacitly allowing approval. Then, later, Russian Prime Minister Vladimir Putin likened the authorization to “medieval calls for the crusades,” Reuters reported.

That wasn’t the end of the dizzying turns of support. Russian President Dmitry Medvedev appeared to rebuke Putin without naming him, saying the use of such terms was unacceptable.

“Everyone is trying to have diplomatic cover for doing this theoretically limited operation,” Hanson said. “No one wants to get out in front.”

In Iraq, the so-called “coalition of the willing” blazed forward initially. But many nation-members back peddled and eventually dropped out.

This time, the United States says it will be among the first to pull back, handing leadership to other nations.

It remains to be seen how strong and unified the coalition will be over time.

How sound is the legal authority?
President George W. Bush secured a congressional resolution authorizing the use of military force against Iraq. Some Congress members have since paid hefty political prices for votes in favor of that resolution.

This week, Obama sent a letter to Congress formally informing Capitol Hill that he had directed U.S. military forces “to assist an international effort authorized by the United Nations Security Council.”

Congressional reaction to the letter has been mixed, with some members supporting Obama’s approach while others argue that there should have been more open debate and consultation with Congress.

Other presidents have engaged in military action without prior congressional approval — most recently, President Bill Clinton in Serbia, and before him, President Harry Truman in Korea.

Not all uses of American force require congressional approval, Radsan said, because the president has inherent powers under the Constitution.

“So I don’t see any big legal problems with Obama’s use of force in Libya,” he said. “These are not the sort of questions that the courts decide. They are more for professors and the public to debate.”

“Obama can say we are protecting the UN system or intervening on humanitarian grounds,” he said.

New legal ground
In a sense, the U.N. Security Council is the body plowing new legal ground this time. It has furthered a controversial move away from the centuries-old standard that outside countries should not interfere in the internal struggles of sovereign nations.

In a Feb. 22 statement announcing sanctions against Libya, the Security Council “called on the Government of Libya to meet its responsibility to protect its population.”

The key words are “responsibility to protect.” They refer to a recently crafted doctrine intended to form a legal basis for preventing governments from massacring their own civilians.

The Security Council did not use that precise language in its later resolution authorizing the use of “all necessary measures” to protect Libyan civilians. But it indirectly invoked the concept again.

This justification for the resolutions adds an extra dimension to the action in Libya, Hanson said, and it poses intriguing questions about the extent to which “it could emerge as a more actively used concept at the U.N.”

Some argued similar thinking in 2003, that the rest of the world had a moral obligation to stop Saddam from brutalizing his own people. But it wasn’t as formalized then as it is now in connection with Libya.

So there is something new going on in Libya, something politicians and scholars can dissect and debate over time to come.

Debating U.S. goals in Libya and lessons from war in Iraq