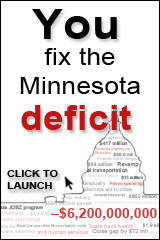 Minnesota could do far better than merely close its $5 billion budget gap — it could save taxpayers billions more and deliver better services too — says a report from six of the state’s largest foundations.

“Beyond the Bottom Line” offers 16 specific ideas for revamping government programs and services. It is to be presented today to the Legislature’s Redesign Caucus and released at the same time to the public.

Some of the ideas in this new bottom-line report were represented in the original version of MinnPost’s do-it-yourself budget exercise. We updated the exercise to include others. So, if you try it again, you will see there are even more options for balancing the state’s budget now — and well into the future, too.

Minnesota engaged
The impetus behind this new report offers hope that there can be a bright spot in these dark fiscal times. Concerned Minnesotans are engaged in the fiscal struggle at the state Capitol. And they are throwing impressive efforts into the search for better ways to do the government’s business.

If we are wise enough and politically flexible enough to try some of the creative ideas coming forth, we could stop wringing our hands and bickering over tradeoffs that seem puny considering the sums many are saying we could save with new approaches.

“The polarized debate of raising taxes versus cutting services misses the point — there are better ways to deliver the services we have with better results,” Peter Hutchinson, president and CEO of the Bush Foundation said in a statement announcing the release of the report.

The 55-page report begins with this challenge to Minnesota: “Imagine a budgeting conversation that moves beyond the polarized battles of raising taxes versus cutting services. Imagine a thoughtful approach to redesigning our public services that focuses every tax dollar invested to generate the best possible outcomes for Minnesotans, rather than maintaining processes designed by past generations for a passed world.”

It also challenges leaders to follow three key principles: Prioritize the public needs and make strategic choices from the priorities. Innovate and think long-term about the budget challenges even if that means tossing out the old rules. Deliver better outcomes for the tax dollars Minnesotans pay.

Some of the specific ideas laid out in detail speak to the long term rather than the current crisis in which DFL Gov. Mark Dayton and the Republican-controlled Legislature must find a way to close a $5 billion gap within a few weeks. There simply isn’t time — for example, to revamp medical assistance programs — by the end of June.

“We do not expect ‘Beyond the Bottom Line’ to become the sole blueprint for this year’s work to address our state’s deficit,” Jim Hoolihan, president and CEO of the Blandin Foundation, said in the statement. “Instead, it’s intended to demonstrate that Minnesota can address our structural deficit in a thoughtful way that continues to generate real value for taxpayer dollars.”

A few ideas in the report, though, could help the state realize at least some short-term savings.

Fixing the roof
What could be a better time to launch lasting reform? The greatest impetus for fixing the roof comes when it is raining. Of course, it’s easier to do the actual work when the sun is shining. But motivation is a big part of the job.

This report builds on other work done by blue ribbon panels such as the Governor’s Health Care Transformation Task Force [PDF], which called in 2008 for sweeping reforms to our health care delivery systems. That task force created a blueprint for enlisting citizens, employers, health care providers, health insurance plans and the government in an all-out bid to keep more Minnesotans healthier at lower costs.

Too many such thoughtful reports have gathered dust on shelves. None of them sets out the full solutions to the state’s deepest problems. They outline a beginning, not an end. Some of the ideas may work. Some may fail.

But we never will know what we can achieve until government leaders explore the recommendations and take steps toward implementing the most promising ideas.

This is a time — when it’s raining buckets — for Minnesotans to insist that their officials they elected begin that exploration.

The foundations behind the report say they already have engaged legislative leaders, Dayton’s office and key community leaders in these bottom-line ideas.

They call for Minnesota citizens to weigh in too. You can do so through CitiZing!, an interactive web site hosted by the Citizens League.

From patients to inmates
Meanwhile here is a sampling of the specific ideas in the Bottom Line report:

• Buy health not sickness. Rather than pay to treat episodes of illness, why not use the recent shifts in federal health policy to convert the entire state to a health care market driven by incentives for both doctors and patients to work on improving health. Cost controls could be built into the incentives. One “incentive” would be to cap or eliminate the tax-free treatment of employer-provided health insurance so that individuals would realize the real cost of their health-care decisions. Estimated savings — $2 billion every two years.

• Deliver certain human services like housing and help for the disabled on an integrated regional level rather than county by county or agency by agency. Some counties already are working on a regional approach. Still, “Minnesota’s human services system is a tangled intergovernmental puzzle in which responsibility is fragmented and results are elusive,” says the report. Estimated savings — $350 million every two years.

• Reduce the need for special education. Instead of waiting for students to fail before providing assistance, intervene earlier. Most Minnesota schools “use out-dated and expensive models which require that ‘students fail’ before they can be helped,” the report says. There are proven models that would improve learning and also save “a significant amount of professional staff time doing evaluations, attending meetings and preparing ‘paperwork’ for which special education is famous.” Estimated savings — $160 million a year.

• Free counties to focus on results. Create a new state-county relationship that holds counties accountable for results rather than mandating levels of service. Estimated savings — $540 million every two years.

• Shift resources from prisons. Stop building new prisons and reduce repeat offending by shifting resources from prisons to community and local corrections. Also invest in substance-abuse programs. Estimated savings — $15 million in the next two years and up to $300 million per biennium within eight years.