John Davis has moved people of all ages to ponder big questions and small communities to accomplish big things. 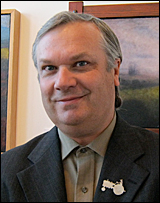 At this time of year, he is reviewing entries for the 11th Kids Philosophy Slam, a contest he devised to prompt children to consider and pose their own answers to questions, such as “Is the pen mightier than the sword?” and “Does the End Justify the Means?”

The competition attracts entries from thousands of students throughout the United States and a spectrum of foreign countries, from Finland to South Korea to Iran. Winners this year will be announced in May.

Headquarters for the Kids Philosophy Slam is Lanesboro, population 788, in southeastern Minnesota.

The contest and art-related projects Davis initiated in Lanesboro have been instrumental in turning the community into a regional center for the arts. Prior to his move there, in 2000, he lived in New York Mills, population 1,195, where he founded the New York Mills Regional Cultural Center and Arts Retreat program.

The two rural communities are listed in a best-selling guidebook, “The 100 Best Art Towns in America.” New York Mills was named one of “Top 5 Culturally Cool Towns” by USA Today Weekend Magazine in 1994.

An artist and visionary, Davis has proved to be brand savvy, marketing shrewd, budget conscious and very persuasive in promoting rural communities. Small cities and towns are turning to Davis for advice on how to reap benefits, especially economic, from their unique cultural and historic assets. Ortonville, for example, once the location of an opera house, invited Davis to give a presentation.

“John is pretty unique in that he is an artist really focused on using the arts for their economic impact,” says Pam Buth, who worked with Davis in Lanesboro and is earning a master’s degree at Hamline University with a focus on community development through the arts. He’s not just looking at art for its intrinsic value.”

The results in Ortonville were cited by the National Endowment for the Arts in its recent proposal for “Our Town,” a national program to promote community development through investments in the arts.

The NEA proposal described New York Mills’ efforts to “reverse a trend of economic decline” by investing in the renovation of a downtown building for its cultural center. Within five years, the town added new businesses creating 210 jobs — a 40 percent increase, the NEA report said.

In New York Mills, he initially supported himself by painting barns, work that led to contact with local farmers. He says two things became especially clear to him:

“The level of education you need to be a farmer is a lot,” and there was “a high level of cultural interest, along with a huge appreciation for art.” In the 1980s, though, the number of farmers dropped, and Main Street businesses were closing.

The situation was ripe for a big idea, and Davis had one. He proposed the town establish an artist in residence program and a cultural center in an old brick building scheduled for demolition.

Davis is usually shy, quiet, low key and laid back. He likes to fish; he has that kind of patience. He enjoys road trips and looking at stars — by himself. When he plays chess or poker, he is strategic and deliberate.

Those are all qualities that contributed to his success. Plus, he is an adept communicator.

“He has a really good read of people, knows how to talk to them and bring out the issues they will respond to,” says Buth. “He has a great ability to tailor his language and approach to different audiences. “

Says Davis: “I realized I needed a language of business and economics when talking about art projects in a small town. You have to market to everyone — whether a farmer, the business community on Main Street, schools and families. And you have to get people in the door, whether it’s by offering free hotdogs or an exhibit of fish decoys.” 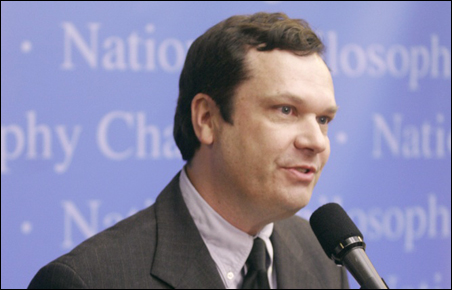 He summarized for the New York Mills mayor and city council potential economic benefits of developing a cultural center. He recalls he maintained, “It could become the jewel of the community, and you would have something worth copying by other towns. It’s a risk, but the greater risk is doing nothing, and even then you would have to spend money to tear the old building down.”

It helped that people got to know him first as “a guy willing to climb 40 feet up a barn and get dirty to do work,” he observes.

Davis persuaded the community to invest $35,000 in the project. The property owner donated the building. A Small Cities grant and private donations of money, time and labor turned the mood in the town from doubtful to hopeful.

A town park features sculpture and a retreat house draws artists from Minnesota and out of state for two- to six-week stays. The community’s annual events include a film festival, puppet pageant and the Great American Think-Off initiated by Davis in 1993.

The Think-Off poses a philosophical question that contestants answer with 750-word essays. The winner is chosen from four finalists who debate the question in front of a live audience.

The contest web site www.philosophyslam.org reflects Davis’ intellectual bent and quirky creativity. It includes a “Philosopher of the Week” feature focusing on the life and great thoughts of a famous philosopher, and a section about “The Stream of Thought Philosophy Tour,” a nationwide trip Davis undertook with his classic Airstream trailer to promote philosophy. Lanesboro is located along the Root River and a regional bike trail. It is also the home of the professional Commonweal Theatre Company. Unlike New York Mills, it was already attracting a growing number of visitors when Davis arrived.

His main focus has been to strengthen its arts community through a merger of two local non-profit arts groups, initiate more arts-related programs, and promote the “branding ” of the town as a regional arts center.

The merger of arts groups resulted in the Lanesboro Arts Center. It houses an art gallery for displays and sales of works by local and regional artists, an artist retreat loft space and the St. Mane Theatre, where audiences gather for concerts, films and community theater performances.

The addition of new revenue sources stabilized the art center’s finances. The center was able to purchase its building, formerly rented, and gallery sales have been the best ever — despite the dismal national economy, according to Richard Haight, art center board chairman.

Davis, he says, “has been behind the bulk of that. He’s got a good head for vision, is very cost conscious, and we’re just real glad he is here to help us. He sets goals and works hard at having his ideas developed. But he’s not a guy to micro-manage. He lets others run with it.”

Two years ago, Davis brought together the Lanesboro Sales Commission, a more than 60-year-old family-owned livestock auction house, Fillmore County, the Minnesota Beef Council and area photographers to produce a photography exhibit. The images showed local people employed in the livestock business, their work and environment. The exhibit opening drew more than 300 people.

“People started talking about the arts and agriculture,” Davis recalls. “We had a demographic group engaged in the arts in ways they never were before.”

He credits his arts background for bringing about his business and marketing acumen. “Problem-solving is a creative process. When there are few — or no — resources, I look at the process as an opportunity.

“You can promote creativity in a lot of ways people can’t imagine,” says Davis, whose inspiration for the Great American Think-off occurred while he was alone on a road trip, towing his Airstream trailer.

“It occurred to me that philosophy was something oriented to the academic world, and I thought, ‘Why? Why should that be? Why not pose big questions to average people?’

“My own personal philosophy is about access, whether through art or intellectually through philosophy,” says Davis, who is traveling to Italy to visit a small town interested in creating a sculpture park and developing a sister-city relationship with Lanesboro.

Davis says he would like to travel to more communities in other countries to share his philosophy. That, of course, would be viewed by some as just a big idea.