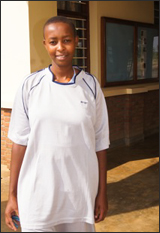 ARUSHA, Tanzania — I wanted to meet Goodness Akyoo the minute I heard that she is the only girl on her rugby team. She would be remarkable even in the Twin Cities, but when you consider that she is an orphan and the poorest of the poor in Tanzania, where women are deeply undervalued, it’s astonishing.

Goodness was in the first class at Peace House Africa, an orphanage and boarding school for high-school-aged kids on the edge of Arusha. Three years into operation with about 280 students, Peace House is about 80 percent funded by the Scott and Susan Augustine Foundation in Eden Prairie. The Augustine family has put $7 million into Peace House Africa, which partners with the Evangelical Lutheran Church of Tanzania.

Harsh living in Tanzania during his formative years, when his dad was a missionary, forced Scott Augustine to be inventive. Later, as an anesthesiologist, he used that background to invent a warming device for post-operative patients, forming Augustine Medical. He sold it to Arizant, another Eden Prairie company, in 2003; last year 3M bought Arizant for $810 million.

In the 1990s, when the AIDS epidemic began to ravage Africa, Augustine and his family were moved to do something. More than a million Tanzanians were dying of AIDS, leaving many more orphans.

“We can’t make a difference for a million kids,” Augustine said. “But maybe we can help a few hundred.”

Within sight of Mount Kilimanjaro
Peace House sits on 150 acres, provided by the Tanzanian government, just outside downtown Arusha. The city’s population has almost doubled to just under a million people since 2000, fueled by the influx of United Nations workers who are prosecuting the Rwanda crimes in a big, new courthouse in the heart of town. Arusha,Tanzania’s version of a bustling, sprawling metropolis, is within sight of Mount Kilimanjaro. Smoke from smoldering trash mixes with dust to thicken the hot air. Mongrel dogs guard the tin-roofed shanties, where merchants push everything from hand-carved bed frames to potatoes. The rule of the road in this two-stoplight town is toot and proceed.

For all Tanzanian youngsters the school options are public and free, where one teacher is responsible for 100 students, or private, where the ratio is much lower but the cost is prohibitive for most. Kids who live at Peace House would never be able to afford private school, and likely would drop out of public. If they weren’t at Peace House they would likely be robbers and prostitutes, says Peace House Head Mistress Theo Seuya.

Staff members visit the homes of prospective students, where the walls are sometimes made of mud, the floor is dirt and the trek to fetch water far. Students must also pass an academic test.  The student body is split about evenly between boys and girls, some of whom were admitted just before they were to be sold for a couple of cows.

Every moment is booked
Goodness, the rugby player, has lived and studied in Peace House for three years. Like the other students, she starts the day at 6:30 a.m. Lights out is 10 p.m. Every moment is booked with academics (emphasis on math and science), sports, study and discussion Monday through Saturday morning. There are monthly events, such as a talent show or a school-wide debate. Last month’s topic: should girls be educated? The all-day language is English, instead of the native Swahili or the tribal tongues.

At school, Goodness shares a room with three other girls in a compound around a courtyard. Each morning the girls display on their beds every card and note they’ve ever received. A housemother also lives in the compound.

Not every student finishes school at Peace House, although most do. The school is not without problems. For example, students, particularly girls, sometimes succumb to bouts of hysteria triggered for no apparent reason.

Goodness first saw rugby played on television. Rugby appealed to her need for sport, and she likes to run fast, she said, although she’s not fond of the scrum. The boys on the team treat her no differently from the way they treat each other, she said.

Must read by candlelight when at home
During school breaks, when she goes home, Goodness helps her grandmother cook, clean, fetch water from a river and sell fruit. She likes to read but finds it difficult by candlelight in her home that has no electricity and a dirt floor.

“I’m struggling,” she said. “No one can stay with me and my brother. I live in a very poor family.”

When she’s an adult she wants to be a teacher and rugby coach.

“In my tribe many girls are married at about 15, but I don’t want to depend on someone,” she said. “I want someone to depend on me.”

Judith Yates Borger’s latest mystery, “Whose Hand?,” is available on Amazon Kindle and Barnes & Noble Nook. It will be published in paperback this fall by Nodin Press.

Related: Volunteering at Peace House, with its inquiring, tech-savvy students