High-income Minnesotans continue to pay lower overall tax rates than everyone else, according to a new tax incidence study released today by the Minnesota Department of Revenue.

“Minnesota’s tax system is more regressive than it was a decade ago,” acting Revenue Commissioner Dan Salomone said in a statement about the study. “Despite a slight improvement over the last study, the system remains notably more regressive than the historical average since 1991.”

Every two years, the Revenue Department examines the overall burden, or effective tax rate, of state and local taxes on households at different income levels. This year’s study is based on tax year 2008 data and the November 2010 forecast.

A previous version of the study was the basis for Gov. Mark Dayton’s claims that wealthier Minnesotans aren’t paying their fair share of taxes. This update bolsters that claim, and Dayton is sure to cite it in arguments about closing the state’s $5 billion budget gap. The counter argument from Republicans in the Legislature has been that many of those top earners are the state’s job generators.

Further, the income gap between top earners and the rest of Minnesota workers has grown since 2001. And local taxes — mostly property taxes — have assumed a larger share of the overall mix of taxes.

Minnesota’s income tax is progressive — increasing as income rises — but not progressive enough to outweigh the regressive nature of other major state and local taxes, the Revenue Department said in the study.

Property and consumption taxes are inherently regressive, even with state tax credits for eligible homeowners and renters. That’s because these taxes are based on the value of purchases or property rather than a taxpayer’s ability to pay. 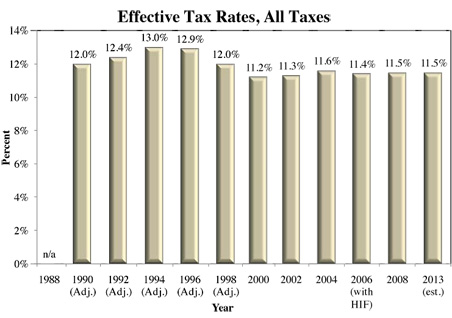 Source: Minnesota Department of Revenue
Effective tax rates for 2006 and later years would have been 0.2 percentage points higher except for a methodological change that expanded the definition of income.

In 2008, Minnesota’s economy remained relatively strong, which increased the share of household income going to those in the upper brackets, noted Paul Wilson, the department’s tax research director. Meanwhile a smaller share went to the 80 percent of households in the middle and lower brackets.

This year’s study, which includes projections for 2013, analyzes $23.8 billion — over 99 percent of all state and local taxes — collected from Minnesota households and businesses in 2008.

A copy of the study is available here. [PDF]