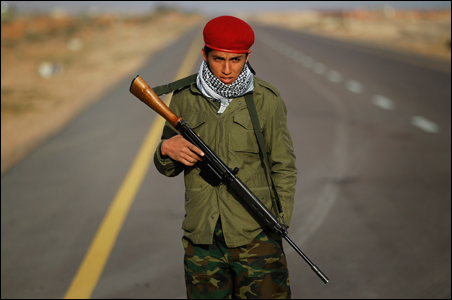 REUTERS/Finbarr O’Reilly
A rebel fighter guards the final checkpoint on the road from Bin Jawad towards Nawfiliyah.

“We welcome the fact that history is on the move in the Middle East and North Africa, and that young people are leading the way,” President Obama said in his Libya speech on Monday night.

He gets no argument about his point that young people are leading the uprising against Libya’s long-time dictator, Muammar Gadhafi.

The more pressing and divisive question as U.S. missiles pound Gadhafi’s airplanes and armored tanks is where this new generation might lead a liberated Libya. Where is this history going?

Because of political isolation over the decades, experts outside the country know very little about Libya’s young agents of change.

“Libya has been a bit of a black box for all of us who study the Middle East,” said Professor Ragui Assaad of the University of Minnesota’s Humphrey Institute of Public Affairs. “Whenever we do comparative work across the Middle East, Libya almost drops out for lack of data.”

Assaad spent two recent years in Cairo working to document rising frustration among youth across the Arab world. Some of his findings are reported in the book “Generation in Waiting: the unfulfilled promise of young people in the Middle East.” His reports also can be found on the website of the Middle East Youth Initiative, a project of the Brookings Institution and the Dubai School of Government.

Democracy vs. tribal warfare
The speculation gleaned from what little is known is that young Libyan rebels may cleave to tribal affiliations more than to the sense of national community that could be all important for building a democracy in a post-Gadhafi Libya.

“Skeptics of the rebels’ commitment to democracy point to Libya’s short and brutal history,” David Kirkpatrick wrote in the New York Times.

Until Gadhafi seized control in a 1969 coup d’etat, Libya had been divided into three separate provinces, “each with myriad tribes of rural, semi-nomadic herders,” the Times said, adding that “retaliatory tribal killings and violence were the main source of justice.”

“Although Colonel Qaddafi worked hard to forge the provinces into a single state, he did little to calm the culture of violence, among other things ordering his revolutionary committees to shoot the ‘stray dogs’ of the revolution and staging public hangings of his political opponents in neighborhood squares or even school gymnasiums,” the Times said.

You can’t help but wonder whether the violence now jolting Libya — as opposed to Egypt’s more peaceful protests — is explained by that culture.

From that view, Libya’s conflict could be seen as more of a tribal civil war than a break for democracy.

Regional division
Assaad agrees that tribal identification is stronger in Libya — and also in Yemen, another hotspot of discontent — than it is elsewhere in the region.

But that identification has been somewhat neutralized over the years as Libyans settled in urban areas where once-isolated rural tribes began to mingle with one another. Ninety percent of Libya’s people live in 10 percent of the land, clustered in cities on the coastal areas.

“So a country like Yemen, which is much more rural in nature, is going to have more tribal identification than Libya,” Assaad said.

The sharper divisions Assaad expects to see in Libya are regional rather than tribal. Longstanding East-West rivalries are “likely to be a potential problem going forward as opposed to narrower tribal identification,” he said.

Whatever the division, Assaad predicts that places like Yemen and Libya are “going to have a much harder time creating post-dictatorship order” than other countries in the region.

In their pre-rebellion state, those countries have operated very much like the former Yugoslavia under authoritarian leader Josip Broz Tito, he said.

“What kept Yugoslavia together was Tito,” Assaad said. “When he was gone they started fighting each other. That could be the case in Libya and Yemen, that they could fall apart the way Yugoslavia fell apart.”

Religious or secular?
Religion defines another divide in Libya and other countries in the region too.

That is the tension that is going to roil many of these countries in the next few years, he said.

The force of youthful energy
Whether Gadhafi falls quickly or remains in power for some time, what isn’t likely in Libya and its neighbors is the survival of the rule of authoritarian dinosaurs, the model of government where brutal despots wield absolute power for decades at a time.

The forces of youthful energy and idealism are too powerful right now for that model to continue.

The median age in Libya is 24.5 years, compared with 37 years in the United States and 44 in Germany, according to the CIA World Fact Book. And Libya’s restless “youth bulge” isn’t fading into complacent old age any time soon. Fully 33 percent of the country’s population is under age 15, says the U.S. State Department.

But in terms of education level, they would be fairly similar to Egypt, he said.

So despite their isolation, these young Libyans have learned enough to know their leaders have squandered the nation’s oil wealth.

“Much of the country’s income has been lost to waste, corruption, conventional armaments purchases, and attempts to develop weapons of mass destruction, as well as to large donations made to developing countries in attempts to increase Qadhafi’s influence in Africa and elsewhere,” said the State Department in a background paper on Libya.

“Although oil revenues and a small population give Libya one of the highest per capita GDPs in Africa, the government’s mismanagement of the economy has led to high inflation and increased import prices,” it said. “These factors resulted in a decline in the standard of living from the late 1990s through 2003, especially for lower and middle income strata of the Libyan society.”

Then oil prices plunged from the peaks in late 2008, prompting the government to abandon economic reform projects. Instead of the promised reform, Libyans got shortages of food and other basic goods.

And so a key question is what would happen to Libya’s economy if Gadhafi were ousted.

Short-term economic chaos
The country’s economic problems are not likely to be relieved quickly, Assaad said.

In the short run at least, Libya and other countries infected with the spirit of the new “Arab awakening” are going to struggle in economic uncertainty.

In a bid to maintain stability, new governments in Egypt and elsewhere are “trying to spend their way out of the crisis…trying to satisfy various constituencies by spending money that doesn’t exist,” Assaad said. “So that’s going to create inflation and instability in the short run.”

There is hope, though.

“In the medium term — if they manage to reduce corruption significantly, which I hope they will — a lot of that money that had been siphoned off from the economy going into foreign bank accounts, etc. is going to generate some growth,” he said. “So I’m fairly optimistic…. But in the short run, I think it’s going to be a tough patch.”

After Gadhafi, then what?

And how is the United States doing so far to propel the situation through that tough patch?

“In what they are doing now, they have it right — in terms of a no-fly zone and attacking Gadhafi’s heavy armor so that he is not able to attack cities and civilians, but letting the rebels do the rest of the work,” Assaad said.

“The difficulty is going to be what happens after Gadhafi falls, in what the United States can do to help the country toward a more stable path,” he said. “That’s hard to say right now. We have to see how things develop.”