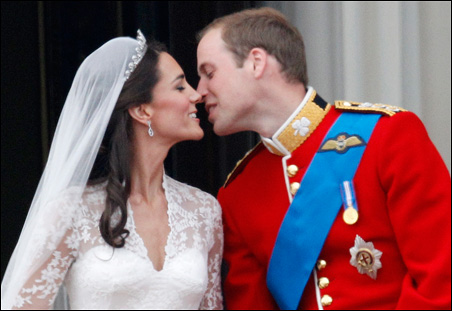 REUTERS/Darren Staples
Prince William and his wife Catherine, Duchess of Cambridge, share a kiss on the balcony at Buckingham Palace after their wedding on Friday.

LONDON — What if Prince William had come home with a Pakistani girlfriend?

Much has been made of the fact that the prince who is second in line to the British throne married a commoner, Kate Middleton, whose family tree includes coal miners, a flight attendant and merchants.

Even so, the royal line of succession remains secure with a strictly white, Church of England family.

You don’t need to look to the far reaches of the Commonwealth — Jamaica, the Bahamas or Papua New Guinea — to see that these royals do not look like the people who call Queen Elizabeth their monarch.

You can see it right here in London. Immigrants are driving massive change in the face of Great Britain — so significant that one in three Londoners represents an ethnic minority.

Pubs give way to halal meat shops
Just across Hyde Park from the wedding festivities is Edgeware Road, an enclave where Islamic book stores and halal meat stores line the streets and the shoppers typically wear veils or beards.

Some call this place “Little Cairo” or “Little Beirut.” Whatever you call it, the people frequenting this and similar ethnic pockets throughout Britain represent one of the major challenges William and Kate face if they are to keep the monarchy relevant during their lifetimes.

I happened to be in London on this royal wedding day — not for the nuptial festivities but to attend a fellowship next week at Cambridge University. Out of curiosity, I went to Edgeware Road to see how the wedding celebration was playing out there.

Among the people I talked to, views of the wedding along Edgeware Road ranged from indifferent to enthusiastic.

For Neel Padel, 21, Friday was just another work day at Marble Arch News. “It’s nice,” he said, “But I didn’t celebrate…I have no interest in this.”

Regular customers from the neighborhood had shown no real interest in wedding memorabilia either, he said.

But Sabry Darwish, 61, had sold some British flags and balloons decorated in the colors of the Union Jack from his FotoVideo shop. “Everybody is happy,” Darwish said. “It’s the wedding of the century.”

The Royals and this wedding have been good for business, he said.“People came here from Canada, from everywhere,” he said.

After Darwish told me he came from Egypt years ago, I asked him what he thought would have happened had Prince William fallen in love with an Egyptian woman.

At Halal Restaurant, Bobby Dij, 23, and his friend Abdul Ali (aka the British Snoop Dogg, he said) stood at a counter surveying steaming platters of kebabs, lamb cutlets and chicken curry.

They hail from Manchester, England, they said, and Dij called himself “British born and bred,” but his family originally is from Pakistan.

“We are British Muslims,” Dij said. “Not the terrible ones, the good ones.”

What did he think would have happened had Prince William brought home a Pakistani girlfriend? “I’d be over the moon!” Dij said.

Still, he defended the status quo.

“We have proper multi culture here,” Dij said. “I have a white missus myself.”

Ethnic and religious exclusivity
Before I left Minneapolis, I had coffee with John Watkins, a University of Minnesota professor whose writings about British sovereigns include the book “Representing Elizabeth in Stuart England: Literature, History, Sovereignty,” published in 2002 by Cambridge University Press.

Prince William’s marriage to a commoner is “terrific” and “newsworthy,” Watkins said. But staged against the backdrop of Britain’s changing demography, the wedding still very much casts “an image of England in terms of a very set ethnicity, one that is very different from life in much of Britain,” he said.

The exclusivity doesn’t stop with race or language. The English Crown cannot be held by a Roman Catholic or anyone who marries a Roman Catholic, says the British Act of Settlement of 1701. You can read the details on the website of the British Monarchy.

In other words, William could not have held his spot as second in line to the throne had he married a Catholic from Quebec — or, for that matter, from England.

Meaning of the monarchy
It is fair to ask whether this fuss over royal lineage means anything significant.

An organization called Republic, one of the groups campaigning for a democratic alternative to the monarchy, is staging its own street party today in competition with the royal wedding festivities.

“We will be celebrating democracy and people power rather than inherited privilege,” says Republic’s party announcement.

The group claims a long list of high-profile supporters in its drive to end the monarchy.

On the books at least, the Queen still wields considerable power — to appoint ambassadors, for example, and even to appoint the prime minister. But could she really assert that power — say, to throw out election results and appoint a prime minister of her own choosing?

“In theory, yes she could,” Watkins said. “In practice, she never will.”

Parliament would move swiftly to limit her powers.

“It’s a wonderful fiction,” Watkins said. “It’s more than garden party stuff. She has her weekly meeting with the Prime Minister. She is certainly involved with various kinds of ambassadorial appointments. Those things matter, but long gone are the days when she could order an execution or anything like that.”

Still, there is intangible leadership power that truly has been significant. It came during World War II in a famous scene — depicted most recently in the movie “The King’s Speech” — when Queen Elizabeth’s father, King George VI, announced to the British Empire via a radio address from Buckingham Palace, “We are at war.”

It was one of many times when the monarch provided a calming voice to the embattled nation, speaking from a position that was above the turbulent politics of that era.

King George VI addressed a generation that is all but gone.

Now, William and Kate face a new generation in a far different world.

Monarch for all of the people
One legacy Queen Elizabeth already may have passed to grandson William is the genetic gift of longevity. She celebrated her 85th birthday this month. And her mother lived to age 101.

I asked Watkins to look far into a future when William could be king and answer the question of what the monarchy means.

“They are going to have to deal with the realities of European immigration, with the ethnic complexity of modern Britain,” he said. “Historically, the British have done fairly well with such things. They absorbed the Norman Conquest. The language I am speaking to you is one quarter French in vocabulary. They can do it.”

But will they do it?

London has been seething for years with the frustrations of second and third generation immigrants — young people whose parents and grandparents hailed from Pakistan, Eastern Europe and other parts of the world.

This new generation demands more than the menial jobs held by the first waves of their families to arrive in Britain. They want nothing less than full integration with British society.

“It’s a wonderful opportunity for the country — so much richness, so much possibility, so much human talent,” Watkins said. “But they cannot treat their Muslim population the way they treated their Irish Catholic population for centuries.”

So what would have happened had young William come home with a Pakistani girlfriend?

“I think it would have been wonderful for Britain,” Watkins said.

“Now, would we even have known about it?” he wondered. (Another old British law says anyone in the line of succession to the throne needs the consent of the monarch in order to marry; so, Queen Elizabeth would have had veto power over any choice deemed as wrongheaded.)

“It is a country that is working very hard on race, I hasten to add, as is ours,” Watkins said. “They have different challenges from ours.”