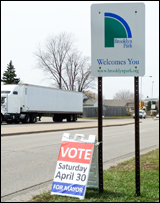 A Liberian public health expert, an outspoken activist from Detroit, a 76-year-old former mayor, a crew-cut Republican, and a standup comedian walk into City Hall in Brooklyn Park.

But it’s serious political business as a mayoral election on April 30 unfolds in the Twin Cities’ most diverse suburb.

Brooklyn Park is one of those drive-past places en route to somewhere else. But, with a population of 75,781, it happens to be Minnesota’s sixth-largest city. It’s on a trajectory to surpass Bloomington in population during the next decade — thus becoming the Twin Cities’ most populous suburb — and then larger than Duluth by 2025.

It’s called a “special election,” and that’s for sure.

A rare Saturday election
Election Day is a Saturday, not the typical Tuesday. It was set by city officials to enhance turn out. No one in the Minnesota Secretary of State’s office can remember a Saturday vote.

For the job of part-time mayor (salary $17,100), there are a dozen candidates who are likely to split fewer than 10,000 votes. A recount isn’t inevitable, but it is being anticipated by city election officials.

The spring election is being held because of the death of Mayor Steve Lampi. He was, with few exceptions, universally beloved for bringing together this city just north of Minneapolis, with its population nearly half people of color, including perhaps as many as 7,000 immigrants from the West African nation of Liberia.

Lampi, 56, died of cancer Feb. 27, less than four months after winning re-election with 63 percent of the vote. His death triggered this dynamic campaign, and, at least in one candidate’s view, this referendum on his work.

“For some people, he was popular,” said candidate Boyd Morson. He is also the staunchest critic of a somewhat amorphous target he calls “the good old boys” in City Hall.

“There’s people who have different opinions [about Lampi],” Morson, 48, said. “But I’m not going to talk about Mayor Lampi. Let Mayor Lampi rest in peace.”

Lampi was mayor for eight years, but many of the city’s hired civil servants, including City Manager Jamie Verbrugge, have been there for fewer than five years.

“I haven’t met them yet,” said Verbrugge, in his job for three years, who noted that the City Council has turned over repeatedly over the past decade. “I don’t think that [Morson] charge can be validated.”

While Morson pretty much stands alone in distancing himself from Lampi, he and the other candidates do have one thing in common: They seem to have emerged straight out of central casting for an improbable made-for-TV movie.

The candidates
There are a dozen of them, but these stand out …

There’s Jim Krautkremer, the septuagenarian former mayor who was ousted after 18 years in office by larger-than-life Jesse Ventura in 1990. Krautkremer, who is back on the campaign trail after a two-decade-long hiatus, said: “I’m not flamboyant … I only know how to get things done.”

Despite his years out of his office, he speaks knowledgably about city financial challenges. His niche will be among older, long-term residents. Quoting Ronald Reagan about his opponents, Krautkremer said: “Age is an issue. You don’t want to use their youth and inexperience against them.”

There’s Jeff Lunde, the burly, articulate Republican Party-endorsed businessman, a former City Council member who challenged Lampi last November, lost but is back for another try in a city that is largely DFL-leaning. He seems on top of all key city issues.

When asked the biggest problem facing Brooklyn Park, Lunde said at a recent candidates’ forum: “Confidence … We are just not confident on where we are … We always dwell on the negative … We have a very vibrant community. We have a very diverse community. There’s nothing wrong with our city that we cannot fix with what is in our city.”

There’s Joe Tanner, the U.S. Postal Service letter carrier with a route in North Minneapolis by day, but a standup comic with a few YouTube snippets by night. He has never run for office before but says that’s no big deal.

“As far as I know, there isn’t a book called ‘Mayor for Dummies,’ ” he said. “More than likely, this is going to be a learning-on-the-job experience.”

There is the most experienced incumbent city official in the race, City Council Member Jeanette Meyer, the lone woman in this electoral mosh pit. Active on a variety of economic development boards, she has received backing from a women’s political group, and flaunted that during the candidates’ forum.

There’s the outspoken, somewhat mysterious but engaging outsider, Morson. He ran for City Council in Detroit, Mich., in 2005 while still living much of the year in Brooklyn Park. He received 2,092 votes out of 338,687 cast in that Detroit primary.

In an interview with MinnPost, he downplayed his run in Detroit but acknowledged he was back and forth between Minnesota and Michigan during that period.

Morson, too, is a bit vague about his occupation, “an independent sales associate … I do a little consulting and those type of things with youth,” he said.

What is clear is that Morson has mounted an effective campaign based on his view that city officials haven’t served the citizens well.

Finally — and perhaps most importantly — there’s Wynfred Russell, a Liberian-born researcher, writer and program coordinator at the University of Minnesota’s Center for Infectious Disease Research and Policy.

An independent-minded community activist, Russell worked on Lampi’s Community Engagement Initiative, which is credited with closing the gap between Brooklyn Park’s white, black, African and Asian communities. He has worked to help Liberian kids navigate the local public schools and has worked on HIV/AIDS education programs. He considers Lampi a mentor.

If he wins, Russell could become the mayor in the American city with the highest concentration of Liberia’s diaspora. How important is the Liberian community? When Lampi died, Liberia’s ambassador to the United States attended the funeral.

But Russell, 38, said, “I’m not running as a Liberian mayor. I am of immigrant stock, yes, but I’m running to reduce crime and to bring this community together.”

Like many places, it’s been whacked by Local Government Aid reductions and fears for the loss of Fiscal Disparities funds that account for nearly 14 percent of its $36 million annual budget.

An extension of North Minneapolis, it has long been an inner-ring suburb with a large minority population. Blessed (or cursed) with an abundance of one-bedroom apartments in large complexes, it has been a city that offered affordable housing for families but sometimes suffered because of absentee landlords.

Today, about 54 percent of the city’s residents are white.

By the mid-1990s, with the aid of the U.S. government and some church organizations, the community of Liberians began to congregate in Brooklyn Park. That number is now estimated at 4,000 to 8,000 from the West African nation, which was settled by returning slaves from the United States.

The housing implosion and the Great Recession have hit Brooklyn Park hard. According to Hennepin County data, about one in 500 homes in Hennepin County have faced foreclosure since 2005.

In Brooklyn Park, however, the number is closing in on a breathtaking one in five.

That is, about 3,500 of the cities 20,000 non-rental housing units have already experienced foreclosure. At its current rate of 750 foreclosures per year, one in five Brooklyn Park homes will have faced foreclosure by 2013, according to city officials.

Meanwhile, even as crime has declined dramatically over the past two years, there is an image that Brooklyn Park is a crime center and unsafe. At a recent candidates’ forum, attended by a standing-room-only crowd of 150 at City Hall, concerns about the city’s image seemed to run neck-and-neck with desires for more economic development.

“I think we are starting to see a shift in how we approach crime and public safety,” said City Manager Jamie Verbrugge. “I think the [the city’s changing] image is going to be a direct outgrowth of that.”

Splitting the votes
Perhaps this is a good sign about just how diverse Brooklyn Park is, or a reality of all political subdivisions, or the unpredictability of democracy, but there is an apparent split within the Liberian community over the best candidate.

There aren’t good numbers on how many Liberians can vote. One city official estimated as many as 3,000. But Russell himself estimated that there are eas few as 1,300 eligible voters — that is, U.S. citizens — within the city’s Liberian community.

Morson has won the support of two Liberian community leaders.

Richard Sondah, chairman of the board of directors of the Organization of Liberians in Minnesota, and Zuban Kpanaku, another OLM board member, recently endorsed Morson and implied that Russell is too cozy with Brooklyn Park officials.

“Morson is the only minority candidate who has shown the courage to raise serious questions about the issues of equity, including the hiring practices of  Brooklyn Park, where minority [members], especially African immigrants and Liberians, hardly get employed for even a menial job,” Sondah told The Liberian Journal newspaper and website.

Said Morson of that support: “I’m in the [Liberian] community, with the community, and they know it … When things happen in the community, I’m the first one they call because I’m not afraid of City Hall.”

But Russell, who has won his own key community endorsements, has been known to challenge some members of the Liberian community, and this may be hurting him.

In his job at the University of Minnesota, he works with many ethnic and immigrant communities. Russell said: “Frankly, Liberians come here with a very deep understanding of American history and English … We come here at least, unlike other immigrant groups, with a little advantage and we have not been able to capitalize on that. We have not been able to leverage our historical ties to the U.S. … You see other ethnic and immigrant groups that are moving forward and doing a lot of great things, and we’re still trying to play catch-up.”

As for charges that he is somehow too close to the city establishment, Russell said he believes voters will “see through that … I’ve never seen a situation where working in a collaborative fashion to produce results that improved peoples live can be seen as a liability. So the fact that I work respectfully and cooperatively with city leaders or the school districts shouldn’t be viewed as a liability.  At the end of the day if you’re not at the table, not there trying to champion your cause, you don’t get served.”

The vote is expected to be close. As with a statewide recount, if the margin is less than one-half of 1 percent, a recount is automatic.

But let’s assume, because of the active campaign, that 10,000 residents vote. Assume a somewhat even distribution among as many as six of those candidates. That could mean the winner could garner as few as 1,100 or 1,200 votes, observers at City Hall believe. It also means that a 50-vote margin or less will trigger a recount.

A tiny sliver of citizens is sure to determine the future of Brooklyn Park, one of those established suburbs that reflects the changing face and heated politics of a shifting Minnesota.

****
To learn about all the candidates, go here.