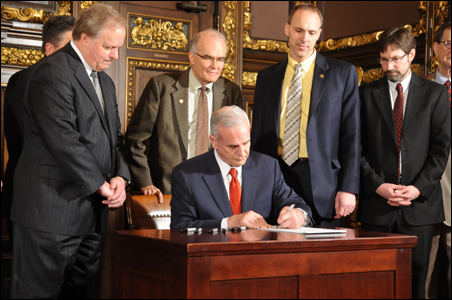 Today was a feel-good day at the Capitol.

Gov. Mark Dayton this morning signed into law the $79 million agriculture finance bill, a move that he and GOP leaders say offers a good framework for the far-more-contentious negotiations expected when the two sides piece together the rest of Minnesota’s budget.

The bill “should serve as a model to our future endeavors,” Dayton said, neglecting to note that the farm legislation makes up less than one-half of 1 percent of the $34 billion biennial budget the GOP is advocating.

Republicans were happy to pass a budget bill three weeks ahead of the traditional schedule (although the ag bill is typically the first one completed). Likewise, Dayton was pleased that GOP leaders removed “extraneous” policy provisions and incorporated his suggestions into the final legislation, which cuts the state appropriation by 5 percent.

The occasion allowed both the legislators on hand and the governor to avoid talking about their budget disagreements.

Both Dayton and Senate Majority Leader Amy Koch, however, remain firm on the biggest roadblocks to compromise –– legislative opposition to any tax increases and the governor’s objections to many of the bills’ proposed spending cuts.

Both sides, though, reassured reporters today that they would be able to cooperate and produce a budget by the May 23 deadline.

Dayton said he’s willing to negotiate — if Republican spending targets are near the budget he produced in February and if they don’t include policy provisions he doesn’t agree with.

Borrowing Dayton’s previous football metaphor about willing to meet lawmakers in the middle of the field, Koch said the GOP “came in on the 50-yard line” and is ready to negotiate. That stand, though, suggests that they’re really not ready to compromise at all on the size of the budget, only what’s in it.

DFLers have criticized Republicans this session for not using nonpartisan state agency fiscal analyses to determine the cost of their proposals and instead relying on private analysts for supporting data. Dayton said he was disappointed that House Speaker Kurt Zellers hasn’t made good on his promise to have the GOP consultants meet with agency staff to resolve the disagreements over what will the bills will cost.

In the end, they have to use one set of numbers to negotiate, Dayton said, “Otherwise, they’re speaking Greek and I’m speaking Latin.”

Dayton maintained he wouldn’t get involved in budget talks until after conference committees resolve the remaining nine Republican omnibus bills. Those negotiations will continue unofficially next week when lawmakers are off for the Easter and Passover break.

“This is a time to go back and check in with your constituents,” Zellers said, adding that all but a handful of members will be taking part in the process.

The GOP leadership is planning a state fly-around next week to talk about the budgeting process and the successes they’ve had this session, Koch said.