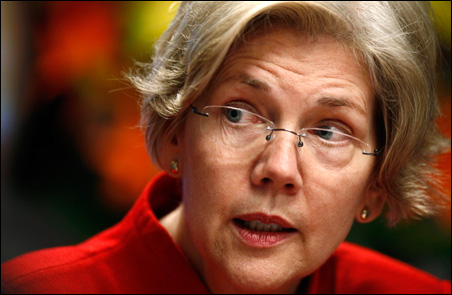 DALLAS — If it were a movie, it might be called “The Elizabeth Warren Story.”

Warren, the Harvard Law School professor tapped by President Obama to set up the Consumer Financial Protection Bureau, spoke here last week to the Society of American Business and Economic Writers. She expressed surprise — without singling out her critics — that the bureau has been hammered so persistently.

Among the most prominent critics are bankers, Republicans in Congress and elements of the media, including editorial writers at the Wall Street Journal.

Her advocacy has stirred up so much blowback that last fall, she embarked on what a Wall Street Journal news story described as a “charm offensive” to defend and strengthen her campaign for the new consumer bureau. She has been venturing into her critics’ heartlands to make her case — for example, when she spoke up for the agency last month at a meeting of the U.S. Chamber of Commerce.

A map of the United States at the emerging agency’s office measures the progress of her campaign. Blue push pins represent personal meetings she has had explaining the bureau and advocating for it. Red pins mark one-on-one calls she has made. White pins stand for meetings with groups.

Bankers’ views split in Minnesota
Despite her efforts, debate over the agency’s role continues around the nation — and in Minnesota, too, where the heads of two state banking groups express differing views.

Marshall MacKay, president and CEO of the Eagan-based Independent Community Bankers of Minnesota, got a red pin after she called him for a 15-minute telephone conversation in December. A month later, he heard her speak at a meeting with bankers. That merited a white pin.

“Each time I’ve heard her speak, she’s been genuine in her comments,” says MacKay. “She’s very consistent in what she says and believes.”

MacKay thinks Warren has made progress in persuading smaller and midsize banks about the value of the new agency, but he doesn’t believe that she has made similar gains with large banks that are often her targets. “She would create change” that’s needed, he said, while readily conceding not all banks agree with his view.

He questions, though, whether Warren understands well enough the differences between larger banks and community banks, which, he argues, have much stronger personal relationships with their customers than the big banks.

Joe Witt, president and CEO of the MBA, didn’t get a red pin and wasn’t at any of those white-pin meetings. Unlike MacKay, he thinks the new agency would be better run by a panel, rather than a single director. He says the agency’s powers are too great.

Witt says the mission of the new agency to concentrate solely on services to consumers is a bad idea because that would take away attention from the “safety and soundness” of banks. He says, for example, banks now delay recording deposits of checks immediately in order to have time to make sure the checks are good. An agency dedicated entirely to consumers’ concerns might want deposits of checks to be recorded with little or no delay, thus increasing the risk for the banks.

Star power
Elizabeth Warren, 61, has the charisma of a Hollywood star. She is the only professor to have twice won the top teaching award at the Harvard Law School. She has been a persistent researcher and advocate for bankruptcy law reforms and has argued for years that vast portions of the American middle class are being squeezed financially, sometimes by financial service businesses fixated on maximizing profits.

She was the “TARP cop” who led oversight of the Troubled Asset Relief Program, which directed the U.S. Treasury Department to buy illiquid assets from banks to help them repair balance sheets weakened by the meltdown.

The idea for such an agency has long been the dream of Warren, who ranks as one of America’s most tenacious, articulate and best-known consumer advocates. It is seen more as a potential nightmare by many bankers, who fear it will spell more regulation. They have long complained about being over-regulated by a host of agencies while thousands of non-bank rivals face little or no regulation.

Warren pledges to stick with her effort to get the agency up and running. “This is not going to go down,” she declared. The bureau, she noted, has launched its website, posted her schedule on it and published a quarterly spending report.

It was mandated by the Dodd-Frank overhaul of financial regulation, which was approved by Congress in the wake of the 2008 financial meltdown. The agency will “go live” July 21, nested as an independent agency within the Federal Reserve System.

The Dodd-Frank legislation gives Obama the power to appoint a director for the bureau, subject to approval by the Senate. He has yet to name that person, but there is widespread speculation that Warren wants and will get the job. Asked if she expected to take the job, she said that was up to Obama.

In February, the Republican-led House approved a bill that would cut the agency’s funding to $80 million from $143 million and eliminate her salary. Rep. Spencer Bacchus, the Alabama Republican who chairs the House Financial Services Committee, is a leading critic. Last month, he charged that Warren went beyond her mandate in planning for the agency by getting engaged in negotiations to settle disputes between state attorneys general and the mortgage service industry over questionable foreclosure practices. She has rejected that charge.

Accountability a key function
Warren told the journalists that the agency will make financial regulators more accountable by concentrating consumer-related regulation within the new agency instead of having it fragmented among a tangle of seven existing federal agencies.

Responding to critics who say the country doesn’t need another federal agency to regulate finance, she said, “We don’t need one more weak federal agency. Our regulatory system failed us.”

Warren described the new agency’s powers as limited because Congress can restrict its budget, other agencies can veto its rules, and a powerful financial services industry has the resources to monitor its activities. She rejected a proposal, backed by the banks, to replace the director with a five-member panel.

Some of the proposals to limit the powers of the new agency would force it to “kowtow” to lobbies, she added.

A primary goal of the agency would be to help consumers answer two basic questions about financial services: Can they afford them, and how can they shop for the best deals? Such a role would help markets perform better, as opposed to hobbling them, she said.

Warren described the agency as a three-legged stool: writing rules as required by Dodd-Frank, supervision and enforcement, and financial education.

She said 50-page documents explaining mortgage and credit card agreements scream out to consumers, “Do not read me.” In one instance, she said, two federal agencies squabbled for 15 years over how to combine a single form.

She said she watched for years as wages remained flat, consumer debt rose and “debt products grew more dangerous … I watched and I worried and I warned as the nation’s middle class became hollowed out.”

A Minnesota first reprised: The Hail Mary Pass
One of the highlights of the business writers’ meeting came when keynoter Roger Staubach, the famed quarterback who led the Dallas Cowboys to two Super Bowl victories, was asked to name his choice for the National Football League’s best-ever star.

Staubach said his top pick would be Otto Graham, the standout quarterback for the Cleveland Browns in the 1940s and 1950s. But he identified his all-time favorite player as wide receiver Drew Pearson, a name that means misery for Minnesota Vikings fans.

Why Pearson, who still hasn’t made it into pro football’s Hall of Fame? Partly because of that last-minute desperation pass Staubach heaved down the field in the Cowboys’ 1975 playoff game against the Vikings at the Metropolitan Stadium in Bloomington. With 24 seconds left and the Cowboys trailing 14-10, Pearson somehow trapped the ball against his hip and made it into the end zone even before he knew for sure that he had the ball.

Vikings players and fans say Pearson pushed off a defender and should have been penalized and no touchdown allowed.

After the Cowboys’ victory, Staubach joked that he prayed the Hail Mary after he let go of his pass. As legend has it, that was the origin of “The Hail Mary Pass.”

Dave Beal, a longtime business columnist and former business editor for the Pioneer Press, can be reached at dandcbeal@msn.com.