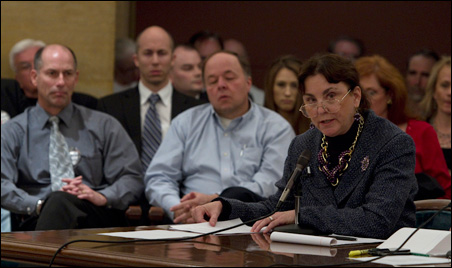 With just a little more than three weeks left in the legislative session, the politicians seem to be doing fine.  But some of the Capitol reporters are starting to crack.

They actually seem to be expecting direct answers to basic questions about how the governor and the Legislature are ever going to resolve their differences before May 23.

This morning, for example, at the weekly media briefing with legislative leaders, some of the scribes seemed to expect the pols to abandon their talking points.

Those talking points have been clear since January:

• The governor says no budget without new revenue.

• DFL legislators say the governor’s right and Republicans are out of control and can’t even get along with each other.

A normal start and then …
Everything started off in normal fashion this morning.  Republicans fired off their talking points.

“We’re focused like a laser on budget issues,” said House Speaker Kurt Zellers, adding that discussions about constitutional amendments on such things as gay marriage and voter identification are not a distraction. (The proposed amendment banning gay marriage received its first hearing today and won committee approval.)

Senate Majority Leader Amy Koch also said Republicans in the Senate are “focused like a laser” on the budget, although she admitted that many in her caucus got “all revved up” by this week’s visit by former Florida Gov. Jeb Bush.

That’s when reporters started to show they’ve heard the same stuff too many times. They started wanting non-“talking point” answers.

Someone, for example, asked  Republican leaders about the questions  they raised over the  “constitutionality” of Gov. Mark Dayton’s request that House and Senate conference committees get budget proposals to him by next Friday so that he and the Legislature will have 17 days left to negotiate their differences.

It was the Republicans who made that a constitutional issue in a letter today. The Repubs unveiled their Constitution specialist, Rep. Doug Wardlow, of Eagan to explain what’s wrong with Dayton’s  request. (Wardlow, it should be noted, is a 10ther, who believes that the federal health care reform is in violation of the 10th Amendment.)

The governor, Wardlow said, is “usurping legislative power’’ as it appears in Article III, Section 1, of the state Constitution and in Article IV, Section 23, with this request.

The Republican leaders nodded their heads somberly at Wardlow’s assessment. The only weakness of the assessment is that it seems to be based on something that the governor wasn’t seeking.

But then, after all the Republican talk about the governor’s limited constitutional role in the budget process, Sen. Geoff Michel turned the whole discussion in the opposite direction.

The budget dispute, Michel said, won’t get resolved “unless the governor rolls up his sleeves and gets involved with the Legislature.”

So then a reporter asked Michel when Republicans “will get off their talking points” so that negotiations can actually begin.

“These are not talking points,’’ said Michel with a straight face.

Koch enthusiastically agreed.  Republicans aren’t just expressing talking points — they’re stating truths, she said, adding that the Legislature expects to get its work done by May 23 but there will be “no new revenues’’ in the budget.

The state will live within the amount “that’s in the checkbook,” Koch said. These aren’t talking points — “these are things I know,’’ she said.

DFL leaders try a little humor
And as the Republicans faded away, they were replaced by DFL legislative leaders, who were going to try to be sort of funny on this fine spring day.

For example, House Minority Leader Paul Thissen started off by noting that it’s Arbor Day and that the DFL caucus — thanks to the generosity of Rep. Rick Hansen of South St. Paul — is going to plant 100 black walnut trees this weekend.

This was an obvious shot at the Republicans and Rep. Steve Drazkowski, who earlier in the session wanted the state to make some money by chopping down black walnut trees in state parks.

This proposal, which mercifully died, and the tree plantings allowed Thissen this morning to talk about how Republicans “want to take an ax to the state budget.”

It should be noted that Hansen didn’t have to dig terribly deep to fund this project. The black walnut trees are only a few inches high and cost $1.25 apiece. (By cutting down big black walnut trees, the state likely would have made several thousand dollars with the Drazkowski plan.)

But Capitol reporters were having no part of Thissen’s effort at humor. They started trying to get Thissen and Senate Miniority Leader Tom Bakk to say what Dayton’s been telling them in private.

Bakk looked surprised at the question that assumed three things: 1. Dayton has an end-game strategy; 2. He’s shared it with DFL legislative leaders; and 3. Legislative leaders would share the strategy with reporters.

Bakk, kindly, didn’t laugh at the question. Rather, he responded with a talking point.

“I can tell you this,” Bakk said. “There will be no agreement without a fourth- tier income tax.”

Some reporters were still trying to get Bakk and Thissen to “tell us the governor’s strategy” as the DFLers slipped away.