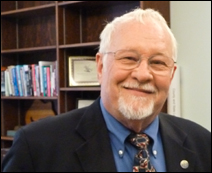 There are 201 legislators at the Minnesota Capitol.  We hear regularly of a handful, but many operate under the radar.

This veteran House member looks a little bit like a slimmed-down Santa Claus. He is a soft-spoken grandfather, former business owner and among the chamber’s most progressive members.

Meet Bill Hilty, 72, an eight-term DFL representative from Finlayson, in Pine County, about an hour south of Duluth, District 8A. He occasionally introduces bills or resolutions of principle. They get no hearings — and little attention. But he’s OK with that.

“I’m not interested in self-aggrandizement,” he said. “I came here thinking that there were things to be done.”

He added softly: “I’m frustrated all the time.”

This session, Hilty introduced a state constitutional amendment proposal to deny that a corporation is a “person.” House File 914 is his response to the 2010 controversial “Citizens United” U.S. Supreme Court case that allows corporations to make political campaign contributions. But Hilty is a man before his time.

Ahead of his time?
“Prophetic,” said Mark Halvorson, executive director of Citizens for Election Integrity of Minnesota, who has worked with Hilty.

Indeed, eight years ago, before Citizens United, Hilty was concerned with the rise of corporate “personhood.” He introduced the same amendment change then — didn’t get a hearing in 2003 and hasn’t had one this year.

Hilty also introduced a resolution this session demanding that the U.S. government rearrange its priorities on defense, “to shift federal funding priorities from war and the interests of the few, to meeting the essential needs of us all.” The bill, H.F. 1249, has 34 House sponsors but hasn’t gotten a hearing, either.

“Thoughtful and independent-minded” were two adjectives that came to Rep. Ryan Winkler’s mind when asked about Hilty, his colleague who is 36 years older.

Hilty breaks the mold. He seems comfortable with silence, not the noise that so often fills hearing rooms and news conference forums. He’s not afraid to chase some legislative windmills.

But he is also a lawmaker with a history of getting major laws passed, such as a series of critical election laws — one that foresaw recounts — and major energy policy laws — the 2007 Next Generation Energy Act is a key one. On those bills he worked with Republicans on the opposite end of the political spectrum, such as then-Gov. Tim Pawlenty and then-Secretary of State Mary Kiffmeyer.

He led the charge to get post-election audits after Election Day that reveal the general accuracy of elections in the state. He worked on electronic voting issues. He was instrumental in helping to build Minnesota Care, the health access system for poor Minnesotans.

But, considering some of his offerings, is he one of the Legislature’s crackpots, too?

“The worst you could say about Bill is that he’s a little bit out of touch,” said former DFL Senate Majority Leader John Hottinger, who worked closely with Hilty on sustainable energy and health care access issues before leaving the legislature in 2006. “But that’s only what his opponents would say. I would say Bill is very comfortable with himself … It’s just hard to get attention [at the Legislature] if you don’t rattle some drums.”

Two proposals: corporations and war
Walk the hallways and tunnels of the Capitol and State Office Building. Watch hearings. Some House members, some senators have nice hairdos and snazzy suits. Some ask all kinds of questions at committee meetings, attempting to show they’re the smartest person in the room. Others email news releases to ensure their names jump onto websites, into newspapers and along radio airwaves. Still others hold news conferences where reporters and bloggers tweet their sound bites.

And then there is the vast array of the rest, who — left or right, Republican or DFLer — sit through hours of dense hearings, embrace issues important to them and work to represent their districts as best they can.

Hilty is the former owner of Minnesota Panel Systems, which built children’s furniture with about 20 employees for more than 30 years. Sales approached $1 million annually. Modest.

Wednesday, after a 90-minute hearing of the House Civil Law Committee, Hilty slowly left his seat on the right side of the conference table of Room 10 in the State Office Building, and chatted. He should have been in a hurry, but he wasn’t.

We talked about his proposed constitutional amendment. There is a movement afoot nationally to amend the U.S. Constitution to help overturn the Citizens United decision and remove corporations’ right to a certain amount of free speech. “I’ve never understood how money equals free speech,” Hilty said. “It’s a little weird.”

But Hilty’s action in the state is to amend Minnesota’s Constitution and to define a “person” as a “natural person,” and not a corporation.

While it might be a trendy position now, it wasn’t in the 2003 session, when Hilty proposed the exact same amendment. He had read about the increasing power of corporations, and he was moved to act.

“I think it’s important to raise public awareness on some of these issues,” he said. “It’s pretty timely now because of Citizens United, but I’ve thought about it for a while.”

He stopped. There was a distant twinkle in his Santa eyes.

“I have a number of things that I’ve proposed that aren’t going anywhere,” he said.

In H.F. 1249, using data from the National Priorities Project, Hilty is leading a charge to push the Minnesota congressional delegation and President Obama to change the nation’s priorities.

The stats he uses: Every two years, Minnesota taxpayers send more than $26 billion to the federal government for defense purposes, which is equal to about three-fourths of the state’s biennial budget.

“WHEREAS, our nation desperately needs to better balance its approach to security to go beyond military defense and include the economic, social, and environmental needs of our communities, state, and nation,” it reads in part. The resolution urges Minnesota’s U.S. senators and House members and President Obama to “shift federal funding priorities from war and the interests of the few, to meeting the essential needs of us all.”

We asked him if we could obtain some of what he’s smoking, and if there was a snowball’s chance in Nicaragua of such a resolution passing in Minnesota right now.

Calmly, Hilty replied: “If people don’t care that they’re spending almost as much money on war as they are to take care of all of our needs within the state, many of which are not being met, and they think that’s a reasonable allocation of resources, I can’t do anything about that. But I would hope that people would at least be aware that that’s the choice being made on their behalf, and it’s something that they might not be willing to make themselves if they were offered the choice.”

Hilty was on his way to his office now. As he retrieved his file folder for his upcoming lands subcommittee, he spoke about the energy crisis facing us all because of the decline of availability of cheap oil. It was down the elevator to that subcommittee, then later to a DFL House caucus meeting, then to another civil law hearing and finally to a private meeting last night to explore how to spread the word on his “Cost of War” resolution.

Just another day for one of the 201 lawmakers, doing his job and caring about his issues, under the radar.