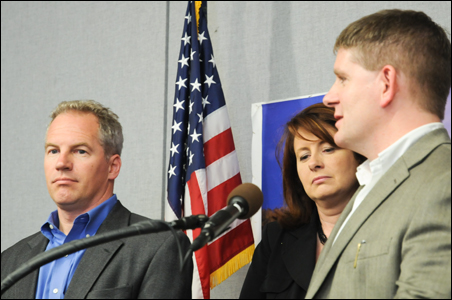 The GOP is looking ahead, but not too far.

As conference committees begin hashing out differences next week between the House and Senate versions of 10 omnibus finance bills, Republican leaders offered little indication of when they could be sent to Gov. Mark Dayton for his possible signature.

Likewise, the leaders were reluctant to offer a specific timeline for conference committees to complete their work or whether they would hold bills back from an expected veto by Dayton.

Although some of the House omnibus bills differ widely from the Senate versions, most face almost certain veto if sent to the governor in any of their current forms.

Further, Dayton has said that he wouldn’t accept a piecemeal budget solution, and both Senate Minority Leader Tom Bakk and Dayton staffers have favored a “global” budget solution. That makes it less likely that the bills would be sent one at a time to the governor.

One encouraging sign
Dayton, however, told reporters today that he could consider smaller bills more in line with his proposed budget if they don’t contain extraneous policy.

One example, the omnibus agriculture bill — which allocates about $76 million from the state general fund — is similar to Dayton’s proposal and is the only bill with a set conference committee date.

“I think any kind of agreement is a good sign,” Koch said about the possibility of Dayton’s signature on an agriculture bill. “The sun out today I’m taking as a good sign.”

Other legislation, however, faces a climb that rivals Mount Everest.

Such policy-ridden bills are on Dayton’s radar for a veto, and he outlined that stand in a recent letter to GOP leaders.

Worrying about possible Dayton vetoes might be getting a little ahead of schedule, however. Conference committees still must reconcile some pretty big differences between their respective bills, especially the Health and Human Services measure and the Taxes bill.

Sen. Geoff Michel, Senate deputy majority leader, said the GOPs work streamlining committees before the session began will make the process go smoother than usual. On the topic of taxes, House Speaker Zellers said he supports phasing out the corporate income tax, a key provision in the Senate bill.

Republicans extended an invitation to Dayton, administration staffers and his commissioners to take part in conference committee discussions, although the governor has said that he won’t personally participate in that process.

DFL legislative leaders said they aren’t optimistic that there will be real party negotiations during the conference process, and in at least one committee, Republicans outnumber Democrats four to one.

“They’re going to do what they want in those conference bills,” much as they have throughout the entire process, Bakk said..

As the majority went about its work passing their legislation, DFLers have objected at every turn.

Policy ramp-up
With the budget bills out of committee and off the floor for now, Koch expects policy discussions to crank up.

A long-awaited Vikings stadium proposal is set for formal Senate introduction on Monday, although GOP leaders remain distant from the proposal.

Koch, noting  that a stadium bill hasn’t come up in caucus, stressed that Republicans’ main focus has been on the budget, echoing similar comments from the bill’s chief GOP sponsors, Sen. Julie Rosen and Rep. Morrie Lanning.

“It’s something that people are going to work on,” Zellers said. “Once they’ve gotten to the point of things we’ve been talking about all along, we can proceed.”

A liquor-related omnibus bill is on the horizon as well and is being finalized next week and could be introduced the week after.

Wednesday was liquor regulation day for Sen. Chris Gerlach’s Commerce and Consumer Protection Committee, which is in the process of choosing which bills to include in the omnibus measure and which to handle separately.