Never in the history of Oberlin College has a graduate of that small, left-leaning Ohio intellectual and musical enclave been called “the most important player in the National Football League.”

But that’s the label that U.S. District Court Judge Susan Richard Nelson, Oberlin ’74, achieved Monday when she was so designated by an ESPN “SportsCenter” commentator.

Wednesday, she will move into the NFL spotlight as if she were Tom Brady, Drew Brees or Peyton Manning, three of the highest-profile plaintiffs in the lawsuit she’s overseeing in her St. Paul courtroom.

First, it’s about time a woman gained such gridiron stature. And, as for us former Yeomen (and women) of Oberlin, where football victories have forever been few and far between, it’s a rare, even giddy, athletic moment.

[Disclosure note: I’m an Oberlin dropout, but I was apparently on campus when Judge Nelson was, although our paths didn’t cross. MinnPost colleague Eric Black graduated from Oberlin in 1973.]

NFL and legal stars to fill courtroom
It all leads to her seventh-floor courtroom at the Warren Burger Federal Building in St. Paul that’s bound to become a media circus tent on Wednesday. 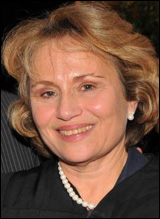 A gaggle of NFL stars is expected to attend. David Boies, the antitrust buster of Microsoft and Al Gore’s recount lawyer, will be arguing for the NFL owners. Jeffrey Kessler, the NFL players’ brilliant, high-energy advocate, will be his normal entertaining self.

Nelson, 59, a former litigator at the Twin Cities firm of Robins, Kaplan, Miller & Ciresi, should be able to handle the scrutiny.

“This isn’t going to bother her at all,” said Tom Kayser, the managing partner at Robins, Kaplan when Nelson was hired at the firm in 1984, and a friend of the judge.

It will be Nelson’s first nationally prominent case since being elevated to the judgeship four months ago. She was at the center of a local controversy in January when she successfully mediated the high-profile dispute over the right of two lesbian girls to walk down the aisle at a Champlain Park High School dance.

Nelson known as skilled mediator
Known as a skilled mediator — indeed, Judge Nelson told the Senate Judiciary Committee at her confirmation hearing that mediation and settlement is a strong suit of hers — Nelson drove an amicable settlement in that emotional case.

It will not, of course, be the first nationally significant case of her legal career; she was one of the Robins lawyers in 1998 who helped the state of Minnesota win the historic $7 billion case against the nation’s tobacco industry.

It’s one thing to look at the details of the NFL labor legalities, which have a long history here in Minnesota, mostly under Senior U.S. District Court Judge David Doty. I wrote about Doty and the Twin Cities’ football labor past a few weeks back. He’s been overseeing NFL labor matters for two decades.

Right now, one NFL case remains in front of Doty; in it the NFL players are seeking to enjoin the owners from collecting TV revenues during the current lockout and to receive damages because the owners violated the collective bargaining agreement. A hearing on that is set for May 12.

But the more central case — the voluntary decertification of the union and the owners’ lockout of the players — has come now before Nelson, who was a federal magistrate for 10 years before being nominated by Sen. Amy Klobuchar to her federal judgeship.

While the NFL TV case before Doty and the lockout case before Nelson are related, she was chosen via random selection of the federal district’s judges’ roster. Nelson will conduct the first hearing Wednesday after receiving a flurry of legal documents over the past three weeks.

A few weeks back, I wrote a piece for Sports Business Journal, the national trade publication, about her. In it, some colleagues and lawyers who have practiced before her described her straight-shooting style.

Media scrutinizing her background
But we can learn a few tidbits about Nelson from her political contributions before she was elevated to the federal bench, first as a magistrate in 2000. Her politics then were liberal, it seems, with notable donations to Democratic presidential candidates Bill Clinton and John Kerry.

Then, there’s the questionnaire she filled out to become a judge, which MinnPost recently obtained. No one can say that federal judges have an easy go of it in the appointment and confirmation process. She had to fill out a 50-page questionnaire and then a series of follow-up questions from senators who tried to pin her down on some decisions she had made as a magistrate.

The national media, in particular, have picked up on one of Nelson’s earliest employment rungs on her ladder to judicial success: From January to June 1975, while she was a law student at the University of Pittsburgh, Nelson worked as waitress at Stouffers Restaurant. (Not sure if this is good for the players or the owners.)

Other tea leaves to read in determining the fate of the 2011 NFL season: Nelson was once a member of the Marco Island (Fla.) Yacht Club, near where she and her husband, Twin Cities lawyer Tom Nelson, apparently own a condo; she was also a member of the Bloomington American Legion; she apparently works out at Lifetime Fitness and is a member of the hoity-toity Minneapolis Club. (Not sure if this is good for the players or the owners.)

Her top cases?
Of course, State of Minnesota and Blue Cross Blue Shield v. Philip Morris, et al, which resulted in the largest settlement in the history of Minnesota. But she was a lawyer in a few other doozies: a major product liability case against Ford Motor Co. for design flaws in a car’s fuel system; a malpractice victory over Abbott Laboratories; and she took on Jeep for its vehicles’ rollover problems and settled for millions of dollars.

Said Kayser: “One of the things about Susan, she has tried a variety of kinds of cases. Not only does she have intellectual depth and breadth, but she also has common sense, which is really the kind of thing you want in a judge.”

She has been a supporter of Advocates for Human Rights and helped a group called Just the Beginning Foundation, which is designed to attract minority kids to the law. Oh, and she listed among her key personal property: a 1957 Chevy valued at $85,000. (Not sure if that’s good for the players or the owners.)

We will begin to find out Wednesday morning when the NFL’s “most important player” straps on her robe, stretches her arm, bangs her gavel and begins the hard work of saving the nation’s most popular sport and $9 billion industry from itself.