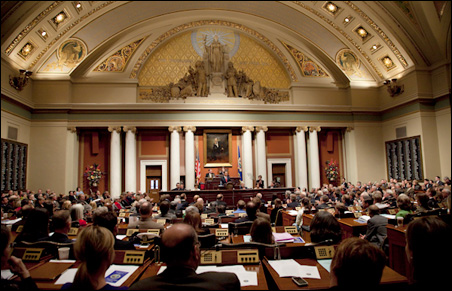 MinnPost photo by Terry Gydesen
Of the roughly 90 conferees who will reconcile differences between versions of nine omnibus finance bills, 35 are new to their respective house of the Legislature.

As conference committees begin merging the House and Senate’s omnibus finance bills, freshman lawmakers will have the chance to play a powerful role in shaping a controversial and far-reaching Republican budget.

In the process, though, their higher profile could gain them accolades for their work — or complaints and blame from citizens unhappy with their budget-cutting decisions.

The GOP leadership and their 56-member-strong freshman class rode into this session with high spirits after crushing a swath of DFL incumbents in November. And now they say they’re ready to deliver on their promises.

Republicans, and specifically the newcomers, said they have a clear mandate from voters — no new taxes.

Of the roughly 90 conferees who will reconcile differences between versions of nine omnibus finance bills, 35 are new to their respective house of the Legislature.

They’ve stuck to the “no new taxes” mantra throughout this session, and it sounds like conference committees won’t be any different, even with expected vetoes on the horizon if revenue hikes aren’t worked into the GOP budget bills.

“I will not support a tax increase [even in the face of a gubernatorial veto],” said Roger Chamberlain of Lino Lakes, the lone freshman Republican on the Senate side of the omnibus tax bill. “I will not do that because it will not work.”

“New members bring a perspective that isn’t necessarily constrained by the knowledge of what’s gone on before,” Hann said. “Sometimes people get over here and they tend to fall into this idea, ‘Well, this is how we do things,’ and they perhaps can’t see as clearly there’s a possibility to do things another way.”

Although the GOP has long touted the fresh views its crop of newcomers brought with them to the Legislature, it’s likely the hard-line policies held by many freshman lawmakers won’t help produce compromise in conference committees or in subsequent negotiations with Gov. Mark Dayton and his aides.

Both Hann and Ortman, though, aren’t thinking past this first round of budget negotiations, which, while difficult, will largely pit Republicans against their colleagues. In fact, new lawmakers seem to have energized partisan leanings in Ortman.

“We have a new mandate here at the state Capitol, and he’s part of that new mandate,” she said of Chamberlain. “Where a district like his flips over, it’s to send a message to people in St. Paul that there are some things that need to be addressed by the Legislature.”

Tough bills to reconcile
Even ignoring a likely veto by Dayton for the meantime, Republicans have substantial work ahead before they can reach compromise on a number of their bills.

Despite receiving similar budget targets from both the House and Senate GOP leadership, the Taxes and Health and Human Services committees (among others) in each chamber formulated different approaches to addressing the same perceived problem.

Ortman’s tax bill, for example, cuts about $780 million over the next budget cycle almost exclusively from aid to local governments statewide. House Taxes Committee Chairman Greg Davids, meanwhile, focused nearly all of his cuts on Minneapolis, St. Paul and Duluth, reducing overall spending by roughly $850 million in his bill.

There are also large differences in how each chamber aims to cut taxes. The Senate proposal would provide business property tax relief, while the House plan would decrease income tax rates for Minnesotans in lower- and middle- income brackets.

As a tax accountant, Chamberlain helped design portions of the Senate package, Ortman said, which is part of the reason he was put on the conference committee, which has yet to meet. Chamberlain said he’s just begun reviewing the House’s proposal and considering which sort of tax breaks to support.

“The less we tax the better — I don’t disagree with that,” he said. “I don’t know which side would be better; the business side is really important, too.”

The Health and Human Services conference committee began cursory examinations of the House and Senate versions this week, giving freshman Sen. Michelle Benson, R-Ham Lake, her first opportunity to serve as a conferee.

“There are a lot of new voices, so it’s probably going to take a little time to get us trained in on how to do this,” Benson said. “Hopefully it’ll be efficient.”

Both chambers received a roughly $1.7 billion target to cut, and both rely on a federal health care waiver to deliver much of the promised savings, but that’s where the similarities end. 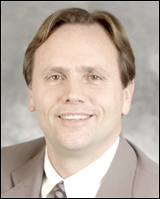 House HHS Committee Chairman Jim Abeler decided to curtail spending by cutting about $370 million in services to the elderly and reducing state payments to HMOs by roughly $350 million. Sen. Hann’s plan would save $900 million by removing some low-income Minnesotans from the state’s Medical Assistance health care program.

Coming to an agreement between both parties could take as long as two weeks, Abeler said, and unofficial meetings will continue next week when legislators are on break.

“For every one meeting here, there are certainly discussions that are going behind the scenes, which is part of any process,” he said. “[Freshmen will] be, I think, deeply engaged in those as well, so you may not always see the input that they have. I know as a junior member, I got to comment in private [in ways] not always so suitable in public.”

High-profile work a benefit or curse?
Shaping a budget is some of the highest-profile work a lawmaker can do, and taking part in this session’s contentious bills — Taxes, Education, Health and Human Services and State Government finance — could raise a lawmaker’s political profile.

“I’m sure it’ll have that effect,” Ortman said. “It wasn’t the intention, but it’s a good consequence of it.”

But Abeler was less sure HHS is the sector for a swing freshman.

“It could be good, it could be bad,” he said. “We have to do some serious management, and so if you had a vulnerable freshman, I’m not sure I would find this as the place to highlight their talents.”

Of the 13 freshmen on those four conference committees, nine represent contested districts that have changed hands at least once — and in many cases more than that — since 2002. In at least two instances, the current freshman ran in a previous election and lost.

In the next few weeks, several legislators may find themselves with higher profiles as they work to whittle away the budget deficit, but it may not be clear if the increased publicity helps or hurts them in the 2012 elections.