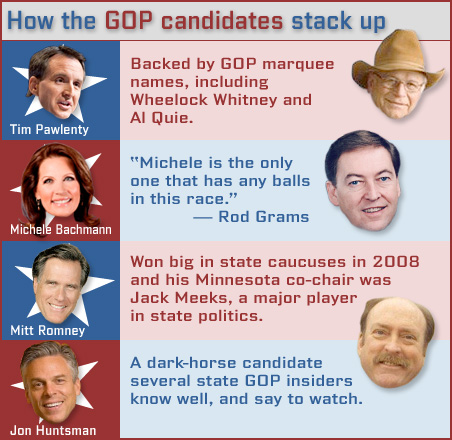 These are conflicted times for Minnesota’s Republican opinion leaders. Not one but two Minnesotans are jockeying for the Republican nomination for president and several others on that list are well within six degrees of separation from Minnesota connections.

Tim Pawlenty remains the favorite son, but among some influential state Republicans he is being weighed against Mitt Romney, Michele Bachmann, Newt Gingrich and perhaps candidate-to-be Jon Huntsman.

Pawlenty has the support of such GOP marquee names as Wheelock Whitney and former Gov. Al Quie, elder statesmen who were mentors of a sort for Pawlenty.

“I am a fan and friend of Tim Pawlenty. I know it’s an uphill struggle but to me he’s worth it,” says Whitney. Furthermore, “I’m committed to him and am going to help him do it.”

Quie speaks of Pawlenty almost with fondness. “My preference is Tim Pawlenty and I’ll tell you why,” he said. “I saw something in him way back when he was in the Legislature.”

Key fundraiser for Pawlenty
Pawlenty is counting on a lot more money as he kicks off the serious fund-raising part of his presidential campaign May 18 with a $2,500-a-plate fundraiser in Minneapolis. Even by high-rolling Republican standards, the goal of 1,000 donors is ambitious. One insider says there’s a lot of pressure to get that turnout, and it’s not just the price tag that’s holding back some donors. It’s the competition.

The candidates’ names that get cited most frequently by state GOP leaders are Romney, Bachmann and Hunstman, the former Utah governor who is considering an exploratory committee. Of the three, Romney still has a place in the hearts and minds of Minnesota GOP movers and shakers. The state caucuses in 2008 went big for Romney, who retains a lot of political infrastructure. In 2008, Romney’s state co-chair was Jack Meeks, a major player in state and national Republican politics. 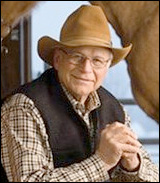 Bachmann is on the outside of the traditional GOP power grid (and probably likes it that way) but gets respect, not always grudging. “Michele will have grass roots supporters in the Tea Party,” Slocum said.

Rod Grams, former Congressman and U.S. senator who’s helping Rep. Chip Cravaack navigate his first few months in Congress, says the race is still wide open but, “Michele is the only one that has any balls in this race.”

After a chuckle over his gender-mangling metaphor, Grams elaborated. “Tim is a nice guy but too moderate and too green,” he said. “It’s too hard for me to support him. Now he’s saying all the right things, but is he saying what he thinks I want to hear or does he have situational politics?”

For most Minnesota Republicans, Huntsman is a name that must be followed by a cautionary definition: Ivy League-educated, extremely popular, former Utah governor, multi-millionaire businessman appointed by President Obama as ambassador to China.

But Minneapolis businessman Dirk Bak, a Republican activist, knows the Huntsman family personally and describes him as “a major contender.” Bak, who met the Huntsmans while working at the Huntsman Cancer Foundation, says he supports both Romney and Huntsman, and “I would say from a conservative standpoint — Huntsman.” 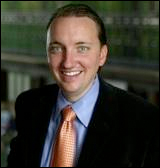 Huntsman is returning from Beijing and if he does decide to enter the race, “Americans are going to be blown away by him,” according to Allen Shofe, a long-time Minnesota Republican operative now in Washington, D.C.

Shofe (and other well-placed pundits) say Huntsman is the candidate Obama would be most worried about. “They fear Huntsman because he has demonstrated an ability to build broad coalitions that attract conservatives and independents alike,” Shofe said.

So what’s a Republican to do? With no clear front-runner, with the fact that getting a national nomination requires 50 different state campaigns, with many Republicans determined not to give the nod to the person who’s been in line the longest, it’s a period of cautious and careful endorsements — but also a belief that there is candidate strong enough to take on an incumbent president.