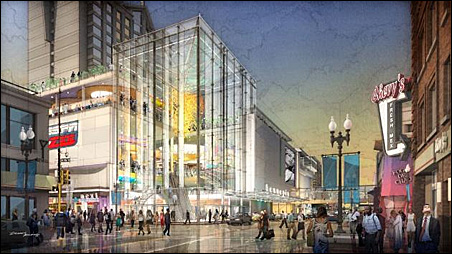 Gensler
Exterior design of a proposed casino on Block E.

If doing the little things is what it takes to accomplish big political victories, then the effort to put a gaudy casino on Block E in downtown Minneapolis has a least a chance of success in these last days of the legislative session.

The concept of gambling revenue filling state coffers — the usual reasons for hyping an array of gaming proposals that have been floated through the Legislature in recent years — never was even brought up at this event.

Instead, the talk was all about jobs.

Melander, who only a few weeks ago was appointed to the Metropolitan Council by Gov. Mark Dayton, talked about “the excitement” the casino development would create in downtown Minneapolis.

An odd coalition
Wednesday’s news event — put together by Alatus, the company which has owned Block E since last year (it bought the building for a $14 million song) — put together some odd couplings. 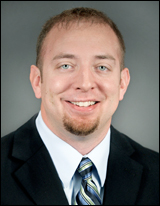 There were labor leaders standing, almost arm-in-arm, with two Republican legislators: Rep. John Kriesel, a Cottage Grove freshman, who has introduced the casino bill in the house, and Sen. Doug Magnus, a Slayton area farmer who is serving his first term in the Senate after four terms in the House. Magnus said he expects to introduce the Senate version of the bill “in a couple of days.”

Seeing labor leaders and Republicans together was a little like seeing the lions lie down with the lambs. Republicans, after all, haven’t been exactly union-friendly in this session.

But on Wednesday, the Republicans and the union heads were speaking warmly of each other.

Magnus talked about “our friends from labor.”

And labor leaders are more than pleased to be working with Kriesel and Magnus.

“Most impressed,” said Wade Luneburg, political director of UNITE HERE, a hospitality union representing 5,000 workers, of his visits with the two Republican legislators.

Bob Lux of Alatus is the player who brought labor into this high-stakes game. It took only a few meetings for Lux and labor to agree to turn the Block E project into an all-union deal.What Lux gets for these labor agreements are people putting pressure on DFLers, including Minneapolis Mayor R.T. Rybak, who so far has opposed the plan.

Minority support, too
Lux also brought Louis King, who heads the Summit Academy, into the fray by assuring King that minority mentoring and hiring programs will be in place for the project — if it gets legislative approval.

“I always say the best social program is a good-paying job,” King says to anyone who will listen.

The claim is that this project would create 450 to 625 construction jobs as the complex is re-shaped, in two phases, into a casino. 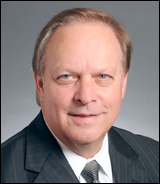 “We have Depression-level unemployment [in construction] going back to 2007,” said Scott Gale, business manager of the Minnesota Building & Trades Council at the Wednesday conference. “This project offers a lot of needed jobs.”

Luneburg was even more enthusiastic about the potential of casino jobs. Union service jobs offer “living wages and benefits,” Luneburg said. If Block E turns into a casino, it would offer upward of 2,400 such jobs, he said.

But, of course, that’s the big “if” here. Is there the will — or the way — to pass legislation needed to turn the Block E flop into a casino.

Kriesel and Magnus both seem to be respected members of their caucuses, but neither is exactly a power legislator, and it doesn’t sound as if legislators are rushing to get on board for a fast push through the Legislature.

On the other hand, the two have got something to sell.

They can take that message of jobs to their colleagues.

“We’ve got to get people to work,” Magnus said, emotionally. “We can’t keep adding entitlement programs.”

There is, of course, that promise of easy gaming money pouring into the state.

Revenue looks tempting
According to research done by promoters of the casino, this Block E high-end casino would put $250 million per biennium into state coffers. (That amount would be somewhat lower at the Phase 1 opening, according to Lux. In the first biennium, the Phase 1 casino would turn over $150 to $200 million to the state, including a $50 million up-front payment that would be required by the state.)

Republican legislative leadership has insisted that the state doesn’t really need any more revenue, although they seem to be having a hard time making the budget balance with $34 billion.

But Kreisel and Magnus say they will try to sell the idea that casino revenue wouldn’t necessarily need to be directed to the general fund but, rather, could go to infrastructure projects.

For his part, Dayton seems more and more open to any sort of new revenue that might help him reach a compromise with the Legislature.

On Tuesday, he tossed out a laugh line that might have been filled with political truth.

At this point in the session, Dayton said, he’d be willing to sign onto “any source of revenue that is legitimate, honest and legal.”