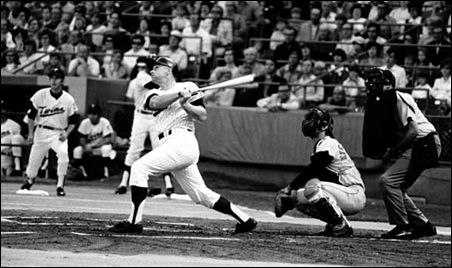 Photo by Peter Freeman/Courtesy of the Minnesota Historical Society
Harmon Killebrew hitting his 500th home run in a game against the Baltimore Orioles at Metropolitan Stadium.

Update: The Minnesota Twins announced this morning that Harmon Killebrew has died at 74.

One of the ways Major League Baseball has changed the most is how opponents are viewed. In the 1960s and ’70s, it seemed each team had a player or two that everybody knew … and feared.

When the Washington Senators came to town, for example, all eyes went toward Frank Howard. At 6-7, Howard made the bat in his hands look like a pencil, and the ball came off it like a laser.

When Cleveland visited, you fretted about your heroes batting against Sudden Sam McDowell, the fireballing lefty who struck out hitters in bunches. With the Yankees … well … it was almost the entire damn lineup.

Those were the “uh-oh” guys, the fellows whose very presence at the plate or on the mound caused home-team backers to shake their heads with worry. It was a badge of honor to be an uh-oh guy. (Judging by what we saw last weekend at Target Field, Toronto’s Jose Bautista qualifies for membership in the club.)

When the Minnesota Twins were the visiting team, there were many players to admire. There was the slap-happy Rod Carew and the lithe, speedy Tony Oliva. But they weren’t the guys who drew everybody’s attention when they strode to the plate. No, the guy who scared the hell out of home fans was No. 3.

Every time he came to the plate, you feared Killebrew would hit a ball so far that it would look like it would never come down.

Record blasts
The first time I ever saw Killebrew in person, he was one day removed from doing just that. The date was August 4, 1962. It might have been the first major league game I ever saw at Tiger Stadium. Jackie Collum, a lefty who was one of the smallest pitchers ever to play the game, was on the mound for the Twins. Detroit countered with fellow southpaw Don Mossi, who is perhaps best remembered for his extraordinarily large ears.

We had barely settled into our seats in Section 15 when the Twins began bashing the ball. A brief check of Retrosheet.org re-affirmed a memory that has been seared into my head for nearly 50 years. Lenny Green hit one of Mossi’s first pitches over Al Kaline’s head in right for a double. After Vic Power bounced out, Rich Rollins singled home a run.

That brought the uh-oh guy to the plate. As Killebrew strode to the plate, a man tapped me on the shoulder. “Look at the left field roof, sonny,” the man said. “Harmon hit one over it last night.”

I stared at the roof in disbelief. It was 365 feet to straight away left field. Then, you had a lower deck and a 25-row upper deck to negotiate. The roof was on top of all that. I have never seen a listing for exactly how high the roof was from the ground. Let’s put it this way. They played baseball on this spot for 87 years. When Killebrew hit his homer, it marked the first time anybody had ever placed a ball over the roof.

If you can hit a ball that far, you have no problem being designated as the visiting team’s uh-oh batter.

Mossi must have sensed this, too. He took forever to throw his first pitch. I don’t remember the count, but I remember the sound when Killebrew made contact. The ball jumped off his bat so fast my 9-year-old eyes couldn’t catch up with it. My brother told me it landed in the upper deck.

The above was a scene repeated often in many ballparks. Killebrew hit the longest homer ever in Baltimore’s Municipal Stadium. It seemed every home run he hit at Met Stadium was a monster shot. None was more monstrous than the one on that Saturday afternoon off Lew Burdette that ended up in the upper deck at the Met. Visiting players used to look up at the painted seat and simply shake their head. In their wildest dreams, most major leaguers couldn’t hit a golf ball where many of Killebrew’s shots landed.

Well-liked on and off the field
There is, of course, considerable sadness around these parts with the news that Killebrew has decided to end treatments for the cancer that, in all likelihood, will take his life. Anybody who has ever met Killebrew — either on or off the field — has nothing but fine things to say about him.

In turn, Killebrew seemed to take a page from Will Rogers. In all his words and actions, he came off as never meeting a man he didn’t like.

But I will remember Killebrew a different way. I will always remember him as one of the best of the uh-oh guys from my youth. It was a badge of honor not necessarily reserved for the visiting team’s best hitter. Instead, it went to the guy who absolutely scared the hell out of the home fans.

I always wondered if Killebrew knew he was one of those guys. My guess is he would be flattered. He certainly should be.

Dave Wright, a Detroit native, is the author of “162-0: Imagine a Twins Perfect Season.” He lives in St. Paul.