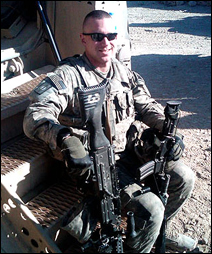 Jeff Wilfahrt doesn’t hold out much hope that he can persuade state Republicans to put the brakes on their plans to put a marriage-amendment on the ballot in 2012.

Still, he wants them to know that their desire to restrict marriage to a man and a woman in the state’s Constitution would affect people such as his son, a soldier who was killed in Kandahar, Afghanistan, on Feb. 27, just days before he was scheduled to go on leave.

Cpl. Andrew Wilfahrt, who grew up in Rosemount, was 31. He had lived most of his adult life “out of the closet,” but at age 29 decided he wanted to join the Army, which forced him to go back into the closet again.

Still, his parents said, his Army pals, learned in time that Andrew was gay.

“They knew and no one cared,” his father wrote in an email.

Last week, Wilfahrt addressed a Minnesota Senate Committee, urging Republicans not to put “discrimination” into the state’s Constitution. No Republican senators were swayed by the grieving father’s talk.

Today, he hopes to address the House Civil Affairs Committee, which is hearing testimony on the marriage amendment.

Jeff Wilfahrt doesn’t have much hope he can block Republicans from moving the amendment forward.

“But I’m hoping to stir the blood of every veteran in the state,” he said.

He’s attempted to reach VFW and American Legion posts across the state to enlist their support.

The Wilfahrts have told their son’s story on a powerful YouTube video. His story has also been told nationally by several media outlets.

These are the comments he plans to make at the Capitol today, followed by his Open Letter to Minnesota Veterans:

Prepared remarks for House committee
My name is Jeff Wilfahrt. I am the father of a KIA in Kandahar, February 27, 2011.

Given the failure of my attempt to use reason and logic to open minds and hearts last Friday on behalf of our state constitution and the supposition now that this House, like the Senate, is also a stacked deck, I will make no direct appeal to defeat this bill to the members of this body. You march in lockstep to a cadence of denial of reason.

I speak now directly to every Minnesota veteran from this chamber. I speak to you over and beyond the political right and left, especially beyond those who are pushing this constitutional amendment initiative on marriage for the 2012 election. This is tantamount to a game of “three card Monte” about freedom and privilege.

A right is being palmed and taken off the table.

The Armed Forces are probably the best example of a melting pot in this country.

As veterans you know regardless of rank, regardless of creed, regardless of sexuality; you leave no fallen behind. You know the military does not give up their dead easily; and having lost our eldest son in military service we now know this first hand. Unlike these politicians you know what the dignity and decorum of a ramp ceremony means.

As veterans you seem to have a deeper sense of fraternity and inclusion than the civilians you served to protect. As veterans you take the constitution very, very seriously. I dare say veterans living in Minnesota are not going to take kindly to the notion that our state constitution is about to be put to ballot to embrace a definition that implies an “ironclad” exclusion and removal of a civil right for a minority group.

I turn to you now, veterans, and I say to you that the constitution is being toyed with, that for political gain, and with the intent to subvert freedoms, there are shenanigans afoot.

Veterans, this is a call to act in civil affairs; it is time to remind this body politic of who has, is, and will shed blood for freedoms and rights.

Please, contact your representatives and tell them what you think about messing with the Minnesota Constitution. This dead soldier’s father needs some help here.

I’m having a hard time showing these politicians where the boundary is between freedoms and religion. Friday, and presumably today, I will have lost twice in this battle. Please do not leave me on the field alone.

I suggest this legislative body tread very lightly on our veterans’ sense of patriotism. Their service is deeply rooted in the constitution of rights they swear to protect. Rile these veterans, and you’ll have a lot more to deal with than a minority whose rights are already curtailed under civil law.

An Open Letter to Minnesota Veterans
Once when you were younger you took an oath. An oath that stated among other things that you would defend the constitution of this country, and perhaps your state constitution if you were with the National Guard.

These constitutions are where we as a society enshrine our rights and privileges. You were once willing to pay the ultimate sacrifice for those documents. You have served.

Like all of you, our son took that oath and has paid that ultimate price. He died this February in Kandahar, Afghanistan. It was death by IED.

It is a touchy subject. It is easy to get lost in the emotions of the issues. I’ll lay it out as clearly as I can in plain language.

Our son was gay. If you recoil from that, I will not attempt to persuade you otherwise. He nonetheless made the ultimate sacrifice — gay or not, he was your brother in arms. All soldiers regardless of sexuality bleed red.

Being gay, he was member of a minority group. Recall that as a Republic, our constitution is about keeping a majority from oppressing a minority.

The state of Minnesota has laws banning same-sex marriage. In addition, it has a DOMA (Defense of Marriage Act) already in place.

The House and Senate of Minnesota are moving bills to place an amendment on the ballot in 2012. These bills, if voted on and approved, will place into the constitution language stating that marriage is between one man and one woman. Again, I won’t attempt to persuade you one way or the other about agreeing with that idea or disagreeing with that idea. On the civil side of things, marriage is a legal matter.

The language of this amendment does not intend to enshrine a right. As I stated, we already have laws covering our social position on these matters. This language is exclusionary to a minority. That type of language should not, must not be what soldiers die for, especially on foreign soil. Who would want to die for a document that excludes them categorically?

So I turn to you as a community of veterans and plead for your support. Regardless of the issue of homosexuality, regardless of the interpretation of marriage, should our state constitution be used to deny rights? This is the question I bring you as defenders of our constitution.

I suspect this is all about a hot button issue to drive voters to the polls come Election Day 2012. Many voters will read the language used and vote yes on this amendment. The language used will seem logical and natural. They will not consider the implications of using the constitution to deny rights. The amendment will probably succeed in its aims and our constitution here in Minnesota will suddenly have taken a 180-degree turn from rights protection to rights rejection.

So I ask you, on behalf a dead soldier, on behalf of a dead soldier’s father: will you join me in speaking up vocally and loudly about this matter? Can you individually and collectively via your Posts contact your representatives, your newspapers, and any outlet you deem appropriate and state that this is not what you think our constitution should stand for, that this is not what our young should enlist for and that is not why we drape our fallen soldiers’ coffins in flags?

As a final note, I tell you my grandfather Charles Wilfahrt fought with the 77th in the Meuse-Argonne offensive in the fall of 1918. Charlie was with the 308th of the famed Lost Battalion. His Company K [colleagues] were in fact the rescuers of the Lost Battalion. He entered battle on Sept. 26. Our son Andrew Charles, given the middle name in honor of my grandfather entered Operation Dragon Strike on Sept. 26, 2010. The parallel and irony are not lost on me.