So will U.S. Rep. Chip Cravaack also be showing an interest in purchasing a condo in Duluth? Or will Tarryl Clark suddenly be selling in Duluth? 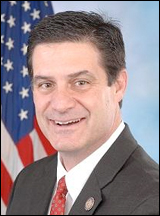 Under a new congressional redistricting map proposed by the Republican-controlled Minnesota House Committee, it would appear that Cravaack now lives in the proposed 7th District.

But that doesn’t mean he would be running against longtime Democratic incumbent Collin Peterson, because Peterson, who calls Detroit Lakes home, now lives in the new 8th District.

Oh, what a tangled political tale this new map — which likely faces a gubernatorial veto — would weave if it were to become reality for the 2012 elections.

The big geographic changes are in the 7th and 8th Districts. The 7th, which once ran from the Canadian border down through such communities as Hutchinson, now runs from the western border of the state and through central Minnesota, all the way to the eastern border. It appears to pick up part of St. Cloud, where Tarryl Clark lives, and runs across the far northeastern suburbs, including Lindstrom, where Cravaack lives.

So here’s the deal: On Sunday, Clark announced that she had purchased a condo in Duluth with plans to run for the 8th District seat against Cravaack.

But Cravaak now lives in the new 7th, which would be very Republican friendly. If this map were to hold, Clark would be in a bind. Run against Cravaack in a tough district for Democrats. Or, continue with her plans to move — part time at least — to Duluth and take on incumbent Peterson in a newly defined 8th district that covers roughly the top third of Minnesota.

Once a mining, shipping, logging, heavily-union district, this new 8th would now be equal parts sugar beets and iron ore. Presumably, this would be a safe district that a conservative Democrat, such as Peterson, could still win comfortably.

The new 7th is clearly designed for Republican comfort. The new 6th, Michele Bachmann’s district, should be a safe haven for her. The 2nd and 3rd Districts are not greatly changed, though the 3rd becomes even more Republican friendly by sweeping slightly farther west. 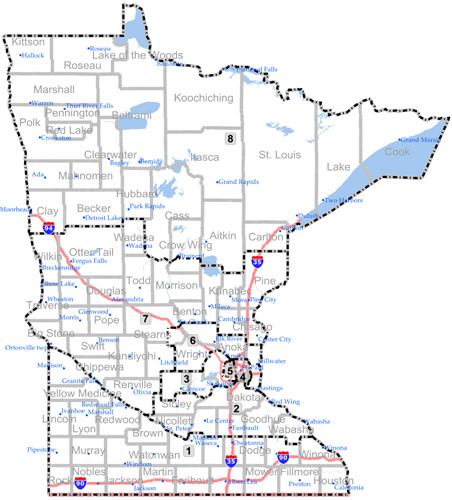 In their dreams, Republicans would merge the 4th and 5th districts (St. Paul and Minneapolis), but those districts remain essentially untouched, meaning in the hands of Democrats into the foreseeable future.

The 1st District, now held by Democrat Tim Walz, will remain hugely competitive. On the map, it looks Republican, but hard work and a moderate voting record has allowed Walz to keep going back to Washington.

There will be considerable criticism of the map. But the big criticism DFLers will have is the lack of public input. The Republican-controlled House plans to vote on this redistricting map as soon as Tuesday, which means, DFLers point out, no time for public input.

Meantime, the Senate Redistricting Committee has done virtually nothing, and apparently will echo anything the House passes. Republicans in the Senate must believe any time spent on partisan redistricting is time wasted.