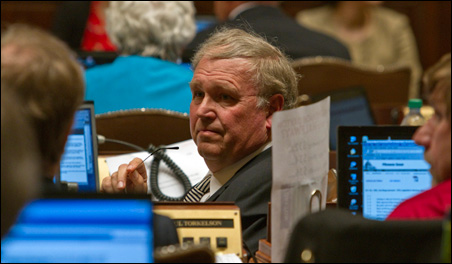 Can you do a double back flip? The Legislature proved it could.

An unexpected double reversal by House Republicans on the Legacy Amendment funding bill derailed the evening hours of the House’s final 2011 session.

DFLers kept talking until time ran out at Monday’s midnight deadline, keeping a number of bills (including the roughly $450 million Legacy measure) from passage.

The chaos came from a proposed change to language in the measure that would loosen open-meeting requirements on a key council that makes recommendations on how to spend $86 million in Legacy funds.

Urdahl said he didn’t sign the bill’s final conference report because of “timing” problems but hinted that the main reason was his disagreement over the open-meeting changes.

An outpouring of bipartisan support — including the backing of Ways and Means Committee Chairwoman Mary Liz Holberg — for retaining the current open-meeting provisions that govern the Lessard-Sams Outdoor Heritage Council persuaded Urdahl to support sending the measure back to conference committee.

“I have many, many concerns when it comes to this language,” Holberg said, calling it “extremely troubling.”

The motion passed 119 to 14. The Democrats were riding high.

A flurry of activity from House conferees ensued. When reporters pressed Urdahl for answers on what would happen, his response was “I ain’t got time for news.”

But the House action didn’t change the mind of Sen. Bill Ingebrigtsen, the Senate author. The measure passed the Senate earlier Monday with ease.

“We asked them to reconvene the conference committee,” Urdahl said, almost dejected. “They wouldn’t do it.”

But then, less than an hour after passing the widely supported amended measure — with theoretically enough time to convene a conference committee and re-pass an amended bill — Rep. Denny McNamara, a conferee, took to the House floor and urged members to re-adopt the original language.

“I certainly am sorry for the situation tonight,” Urdahl told his colleagues on the House floor, “but we need to get these bills passed.”

The Democrats were outraged by the reversal, and the motion passed by only four votes.

It was then, a number of DFLers said, that they decided to run out the clock.

They took issue with money hat was dedicated to rural parks from the sales tax-supported Legacy constitutional amendment, passed by voters to fund wildlife, the environment and the arts. Under the bill, outstate Minnesota parks were to receive $15 million more than those in the metro, which, Urdahl said, was one of the toughest provisions to negotiate with the Senate.

And they criticized Republicans.

Minority Leader Paul Thissen derided GOP lawmakers for voting against a measure that “passed almost unanimously on the House floor minutes ago,” adding: “I think we have a lot of questions about this legislative session.”

DFL members (although some supported the bill) questioned almost everything about the legislative process and the GOP budget bills.

While Urdahl seemed relatively cool to the barrage from Democrats, McNamara didn’t take it well, accusing DFLers of nitpicking at small pieces of the bill.

“This is the one good vote we get,” McNamara said. “If you want to kill the good stuff, then kill it.”

In the end, after a short speech from Thissen, House Majority Leader Matt Dean called a quick end to session and the lawmakers left without final action.

As a result, the Legacy bill is on hold until Gov. Mark Dayton calls a special session. At that time, Urdahl will have to re-enter conference committee and craft a new Legacy bill using the framework of the one that didn’t pass.

Both the House and Senate versions are likely to keep a provision that would require Dayton and the Legislature to solve Minnesota’s existing $5 billion deficit before state agencies can begin using Legacy money. That provision is meant to stop the state from using the dedicated Legacy dollars to fund day-to-day operations.

“We’ll go into special session and we’ll make this a better bill,” Urdahl said. “If it wasn’t this issue,” he said, referring to the open-meeting provisions, “it would have been another.”