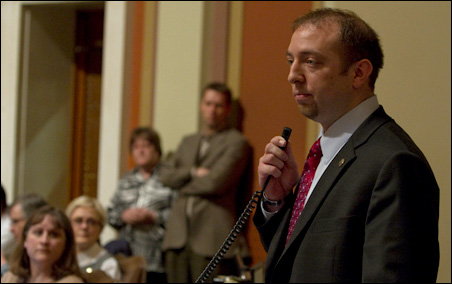 During one of the many breaks on the final day of the legislative session, Sen. Scott Dibble came into the House chamber to introduce himself to freshman Rep. John Kriesel.

“Thank you,” said Dibble, the south Minneapolis DFLer, to the Republican from Cottage Grove.

“It breaks my heart that I couldn’t get more [Republicans] to vote ‘no,’ ” said Kriesel.

“You were powerful,” said Dibble, who is gay.

The two, who disagree on most issues, continued to chat amiably.

“Maybe one out of 100 has been negative, and even those have been respectful,” said Kriesel.

Kriesel, 30, wasn’t backing off the strong statements that he’d made about what he sees as the ills of the amendment.

“I’m a conservative guy, and when it comes down to it, you shouldn’t have people messing with another person’s family,” Kriesel said. “I’m very disappointed in how the vote came out.”

Kriesel has received most of the attention for bucking party lines. But there were five other House members who also crossed party lines. Three other Republicans opposed the constitutional amendment. Two DFLers supported it.

At least none of the six seems to be paying any sort of political price for their opposition.

Here’s a look at the five others:

The other Republicans
Tim Kelly, a second-term Republican from Red Wing who is a member of the majority’s executive committee in the House, surprised DFLers even more than Kriesel did when he took the floor and spoke in opposition to the amendment.

“You think of Red Wing as such a conservative area,” said Rep. Alice Hausman, DFL-St. Paul. “I thought what he did was incredible.”

But Kelly, 47, doesn’t think so. He thinks his party is “behind the times” on the issue of gay marriage.

“I’ve thought from the start we’re on the wrong side of this issue,” said Kelly in an interview Tuesday. “I think in most places, there’s almost an apathy about it. People are saying, ‘Why should we care?’ … The hard core on the issue comes at it from a religious aspect. I expect that, and I respect their beliefs.”

Still, to bring up marriage in this session was a strategic political mistake, Kelly believes. Republicans won a majority to balance the budget and create jobs.

“We preach less government is a good thing,” Kelly said, “except somehow we think there needs to be more government on this issue.”

Kelly said he has “great respect” for his caucus’s leaders, “but I very respectfully think they made a wrong decision on this.”

To date, emails would suggest most agree with him. He said of the 400 e-mails he’s received, only three have reproached him for his vote.

Rich Murray, 54, of Albert Lea is another member of that huge Republican freshman class, which has been so conservative on most issues. But on the marriage amendment, Murray joined first-termer Kriesel in voting “no.”

He made no fanfare about his vote and gave no speech. But he doesn’t duck from it, either.

“I ran on the budget and jobs,” said Murray, an investment adviser. “Those are my priorities. Those are the issues I’ve been sent here to work on.”

There was no magical moment, he said, when he decided he couldn’t support the marriage amendment. And he didn’t really think about any political consequences.

“It felt right in my heart, and when I went home on Saturday night, I slept like a baby,” he said.

There have, as it turns out, been consequences — almost all of them favorable.

Steve Smith, an 11-term Republican from Mound, is the most senior member of the Republican caucus. An attorney by profession, he’s not typically been a legislator who draws much attention to himself.

On Saturday night, Smith, 60, made no speeches about his feeling about the marriage amendment but he did vote in opposition. It was not a vote he had to reflect on deeply. It simply seemed the right thing to do.

“Up until I was 30,” Smith said, “I was a Democrat. I’m one of those Reagan Democrats who became a Republican.”

So far, there’s been no backlash; no suggestion from activists in his district that his endorsement in 2012 will be opposed.

“That may happen, but not yet,” said Smith. “So far the feedback has been very good.”

Two DFLers crossed party lines and supported the Republican majority on the amendment.

“It was disappointing, but we knew they were going to do it,” said Paul Thissen, the House minority leader.

What led to their decisions?  And what has the reaction been to their votes?

Rep. Lyle Koenen, 54, who has represented the Clara City area for five terms, did not return a phone call seeking comment. A former farmer (he’s sold his cattle and now rents his land), Koenen in recent years has been a milk truck driver and a school bus driver. Koenen has served on property tax and ag committees during his tenure. He seldom speaks on the floor.

It’s already been noted on Koenen’s Wikipedia entry that he voted to support the marriage amendment on Saturday night. But given the rural nature of his district in southwest Minnesota, that may not create a political problem for Koenen, who was a party activist before becoming a legislator and also has served as a Sunday school teacher at his church.

Denise Dittrich, 54, a fourth-termer from Champlin, wasn’t eager to talk about what led her to her decision to support the amendment.

What sort of feedback is she receiving for her vote?

“Let me think about that,” she said.

I paused, allowing her time to think.